This is a brief introduction to Ing's counting system. All text that follows refers to the 19 x 19 board.

Before any game using Ing's rules, the players should ensure that there are exactly 180 black and 180 white stones each. (Note: In Chinese Rules and Japanese Rules, the number of stones is unlimited.) That is why Go sets designed for Ing's Rules have specially designed containers that will make the counting of stones easy. See

here for a picture of the specially designed containers.

In an even game, Ing's rules specify a komi of 8 points, with black considered the winner when there is a tie, so the effective komi is 7 1/2 points. This is in contrast to the 6 1/2 points commonly used under Japanese rules.

In any game, all points that lie between opposing live stones must be filled before counting. Ing uses proximity scoring, so such points that are adjacent to stones of only one player are occupied by stones of that player and count as her territory. Points adjacent to living stones of both players are shared evenly. If there is an odd number of such points, one such point is left unoccupied.

The effect of the scoring under Ing rules is normally the same as Chinese scoring, as both the number of stones and the territory are taken into account. As such, there is no need to keep track of the number of prisoners during a game. All prisoners are returned to their respective containers. 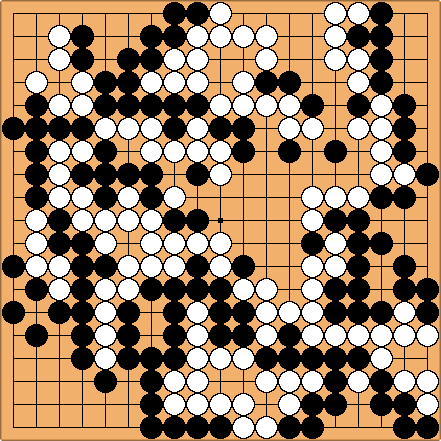 This is a game taken from the 12th World Youth Goe Championship (1995), with all the neutral points filled. (The SGF files of all the games in this competition can be found 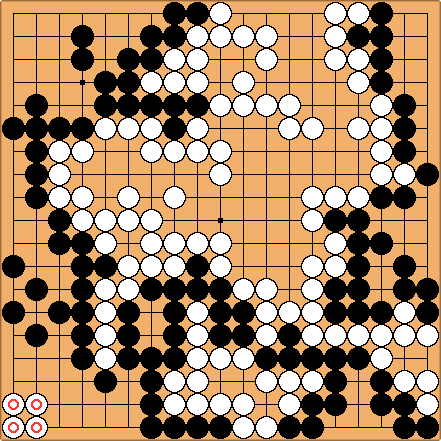 Before counting, all dead stones are removed from the board and returned to their respective containers. 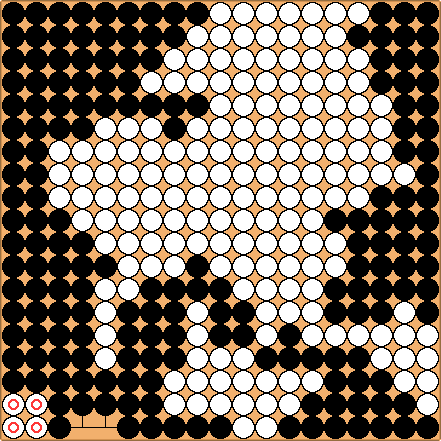 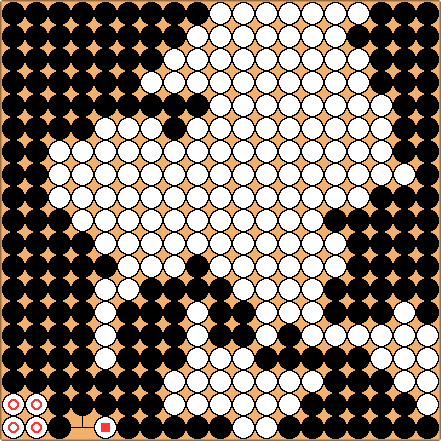 in this diagram, and then count 2 points for each such stone and 1 point for the unfilled point, so black wins by 3 points in this example.

When done right, the board should have exactly 1 unfilled point, because there should be 180 black stones and 180 white stones. Therefore, this method of counting acts as a verification that the number of black and white stones is correct. This guards against the accidental loss of stones during a game.

dr: When playing with handicap, clearly each stone given is a point for Black. Also, in handicap games there is typically no komi, so the extra points from handicap stones seems like salt in the wounds. For example, in a 9-stone handicap game, you can think of 8 of those stones being reverse komi in Black's favor! Is there any compensation given to White to balance this out?

dr: Ah, I found out the answer

on the AGA's website, in an interpretation of the SST rules written by Janice Kim, Michael Simon and Phil Straus. In handicap games, White receives komi equivalent to the number of handicap stones placed, and wins ties. I'll clean up this page to be a bit clearer when I get a chance.

HansWalthaus: Some more examples please, this is confusing.

reference 3. Fireclaw: The point of this system seems to be to simply counting and dame points because it occupies all points on the board but 1, and so simplifies counting.

A. Zuur: I like this because of the way the board looks at the end. If one wanted to use fractional komi, that could be arranged by counting the 361st (empty) point as an extra 0.5 points for one player or the other, right? If the 361st point is a dame, the 0.5 points would go to black to get 7.5 point komi with 4 white stones filling black's territory, as in the example. Otherwise, it would be tacked on the score of whichever player is surrounding the point... Just thinking out loud.