How to Beat Anyone At Go

Warning: This method can result in severe loss of honor if used against players known to be weaker than you. Only do this if they are stronger! Also, I cannot be held responsible for any injuries exacted by your victim.

If you want to be able to beat anyone[1] at go, you must be willing to go through numerous steps to butter them up for the game.

All you have to do is challenge this person to an early morning game on a Saturday. That's the most important part. It ""must"" be a morning game on a Saturday. Otherwise the whole thing falls apart. Then ask if they would like to come to a "party" you are holding the day before, but be sure you can invite some of your friends to come. Tell your friends before-hand that the party will also be used as a front for you to defeat your opponent.

Only do this one if you are sure your opponent doesn't know how skilled you are. After he/she gets to your house, complain about how you weren't sure about this match anyway. Use phrases like "I get beat all the time on the internet servers" or "I only stand a chance in the Yahoo kids server, even though I always win". If your opponent says it's OK if you don't want a match, say that you want to go ahead with the match anyway because you'll review it later. For even more effect, go find a simple ladder problem (they are abundant on

It should be getting late by now, so prepare your victim for the next step. If you (and your friends) are legally allowed to drink alcohol (by no means am I condoning the consumption of alcohol), make it a point that you want to drink a lot. Offer to pour some for your opponent and your friends, and go somewhere where you can't be seen. Give you and your friends non-alcoholic beer, but give your opponent alcoholic beer. If you can't drink alcohol, make sure you have a lot of Sprite lying around (as well as a caffeinated equivalent like Storm), and do the step just as if you were dealing with beer. Eventually the party will have died down, and everyone will go home. Before your friends go home, thank them in secret for all their help. Now comes the final step.

If you drank beer in the last step, your opponent will have a splitting hangover. If you drank soda, they will at least be really tired. Call up your friend around 6:00 AM and complain about how you have a hangover / are really tired. Yet, nonetheless, you want to go ahead with the match. Ask if they could drive over to your house to play. If they try to reschedule it, refuse to do so, saying that you have a big game coming up. If they have any sense of decency, they will think this: "What the heck, he invited me over to his party. The least I can do is drive over to his house and whoop him in go." When he comes, say that to keep things reasonable (and to make things easier to accurately review), you will agree to no handicap if at one point during the game, you get to pick your opponent's move. Your opponent will likely agree. If not, skip down to the Backup Plan below. Your opponent is also likely to allow you to be black. If not or if he insists on using nigiri and you're not black for some reason, skip down to If You're White. So, starting off, put down your stone in some reasonable position like hoshi or tengen. But when your opponent prepares to put down their stone, stop them, saying you want to choose their move. When they relent, say that you want to make their move a pass. Realization will likely dawn on your opponent, and when you pass yourself, you will have won by over 350 points [2]. Congratulations.

If you're white, you will pretty much be following the exact same steps as shown above, except your victory won't be nearly as impressive. So let your opponent play their first stone, then mirror that move unless it's tengen, at which point you should play at hoshi. Then, stop your opponent from playing their second move, saying you want to pick it. Make it a pass, then pass yourself. Every space on the board will be dame, and you will have won by whatever komi you decided on.

If that doesn't work, than just tell / remind them that you're still unsure, and that you should be able to set up your handicap however you want. For added measure, offer that they lie down on your couch while you think of your handicap. This is under the pretext that they can try and forget that they have a hangover / are really tired. If in the rare case that they turn this down, go to What To Do If All Else Fails. While they're lying there, quickly set up a 180 stone handicap for yourself (while making as little noise as possible) in a checker pattern like this: 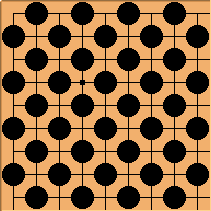 You will have totally surrounded every space on the board. When you wake your opponent up and show them the board, they will feel worse than they did before.

If it looks really desparate, glue the stones to the board.

What To Do If All Else Fails: Two words. Nuclear Tesuji.

[1] In the title, "anyone" must really mean "anyone who is gullable enough to follow your every instruction and plod along the path you lay out with nary a bit of skepticism and with complete bovine obedience to your every whim."

So you can beat any gullable Joe by begging for concessions and working outside of the game. Is it clever or surprising or funny? No.

cliftut; I disagree about it not being funny. It's amusing, but only if you realize that this would never really happen. Someone could sure try, but this is an account where it is assumed that everything will go as planned, which of course it never does. Actually, I find the part about passing for your opponent to be quite clever. Going through all of this isn't very funny without that. I might try that one on someone, but only as a little joke, not an extended prank Like this. This isn't a technique; it's sillyness and foolery, just as it's meant to be. Taking this seriously gives you bad aji. ^_^

You could win any nigiri by stabbing the hand of your opponent as she places her stones on the board and while she is writhing in pain remove a stone if necessary. LOL!!!!111 ROTFHFAILIEJNAWDA!!!!oneoneone

Ugh! At least this isn't listed as an example of "GoHumour."

But what do you do if your opponent points out that your group has no eyes and is not in a seki? He can then remove the stone and win, because even with zero komi, he has 1 capture and all that's on the board are 361 dame.

[3] I absolutely hate it when an opponent says "put in as many stones as you like" or something of the sort. If I also get to place them WHERE I want, I generally throw in this or a variation of the theme. Good basis for this page as well :P

Though this may not be the choice of everyone, it's HORRIBLE to play against :D Sure, you might get life if you start at 'a', for instance, but still. Another, ask for 13 stones handicap, take four simari and tengen. Hmm... now that I look at it, the two marked stones might be too high for the global strategy (ie, kill 'em all, or at least take all the territory :P) 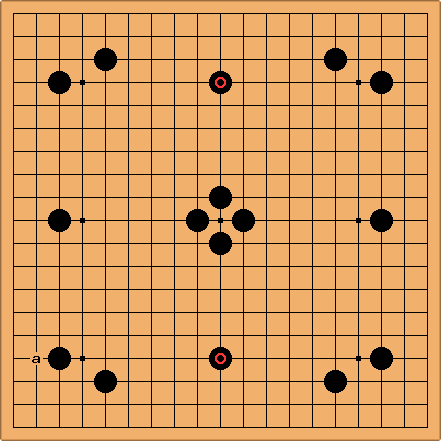 adammarquis: Probably not a really great idea. I say "place as many stones as you like" rather often. Sometimes players like to play at a weaker handicap and talk more about the moves, sometimes our ranks such that it is a toss-up between two handicaps to have the most fair game. I let the student choose the kind of game they want. If somebody put this down and said they wanted to play a shape game sort of thing, I'd even be fine with this. If they, like you, were doing it to pain me, that's fine too. I just won't play with them anymore.

Although I have no proof for this, I think that with 20 handicap stones in the following position white should not be able to live at all. 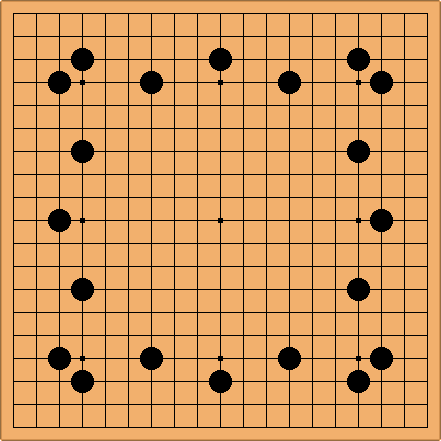 George Caplan I think, if White is the least bit stronger than black, I would bet he could live. Certainly at a two stones difference. There is a lot of room in the center, and at least some aji in those long knight moves. I am no pro, but with amatuer play, and error, White has a good chance. Have to try it out. 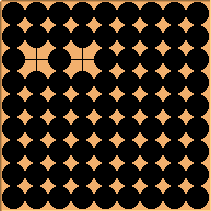 ProtoDeuteric-Forcing the 9 dan professional to give me 359 handicap always works for me.

unkx80: The 9 dan professional can allow you to have 359 handicap, but with one condition: the professional player will determine the placement of the handicap stones. 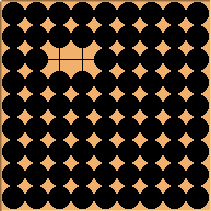 I tried using your technique of asking for a 359 stone handicap, but I lost a huge snapback on white's second move, and my game went downhill from there. In short, I don't think your idea is very good. I'm going to ask for a bigger handicap next time.

What about this: *I* can give a professional 9d 360 handicap, and I'll let them even determine the placement of handicap stones. I can win all the time like this against 9p and more. Go is so easy for me! Is this Kami no itte, or what? --bagol

Tderz Could White 9p then win by Jigo even under Japanese Rules? (W+J = W+0.5 if then killing everything on the board?)
Under Chinese Rules the professional would win anyway ... the stones go directly back into the bowl ...

In a 360 stone handicap game (komi .5, japanese rules) white has a cunning trick play: 1) take the stones. 2) black plays somewhere 3) pass! If the black player foolishly plays anywhere, he loses the game, since now he can only get 360 points even if all white stones die. --Bass 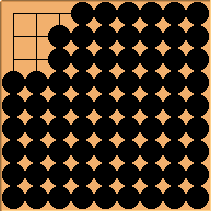 Anonymous: The only way to ensure that you will win with stone handicaps is if you actually have the 354 stone handicap instead of the 359 stone handicap, because even if your opponent chooses the placement of the stones, the best he could end up with is seki or ko. (see Bulky seven in the corner, Walkie Talkie Seven)

Curtmack - If someone offered me an obscenely large handicap, (say, 109 stones) I think my choice would be something along these lines: 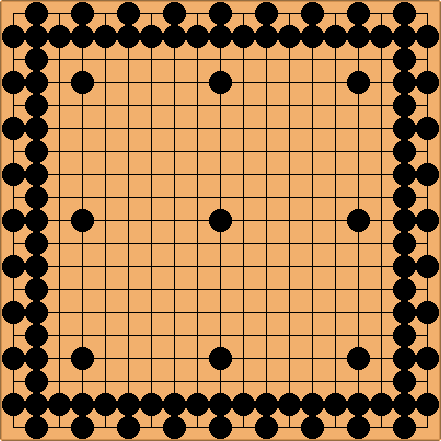 togo: I think you are wasting the power of your border-of-death a bit. Try this: 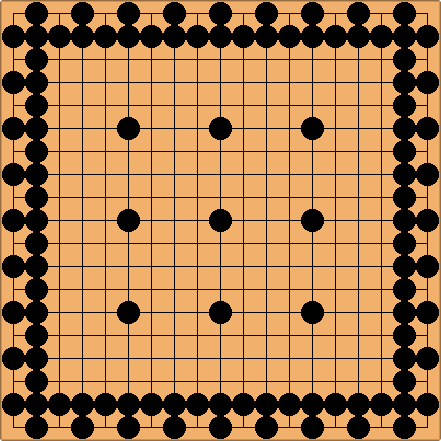 togo: ... on the other hand, even with all single stones removed, White could not win a single moku when optimal play is considered. 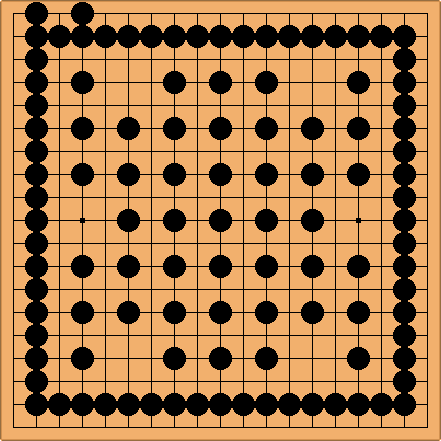 Better yet, why not move all those redundant eye-stones toward the center and make it blatantly obvious?