jettero: This is not the first time this has come up for me. My teacher tells me that 2 is better at A or B. My idea for exploiting it, perhaps later on, is to attach to the 2-stone and cross cut. Is there a known method to cut up the lantern procession? Is it simply a good move? Why is A better? Perhaps it's because black can't make the horses face at C from 2?

(additionally) I appreciate tderz points below and understand them. They are excellent points that I'm likely to use in my next H6 game as black. But my questions were about the play at 2 vs. A in my diagram and were not intended as a global strategy questions.

It turns out, there is actually a page on cutting lantern procession (that I'm embarassed to say: I myself added); but I'm going to leave the question as is, since I'm still curious if cross cutting (later) is a bad plan. 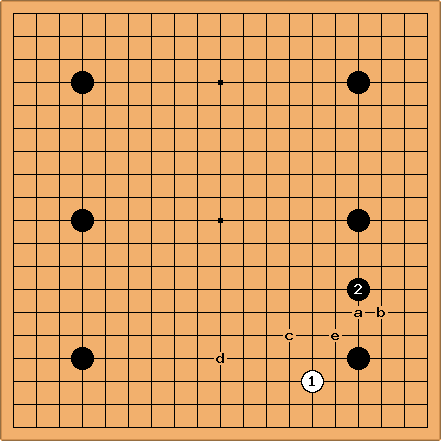 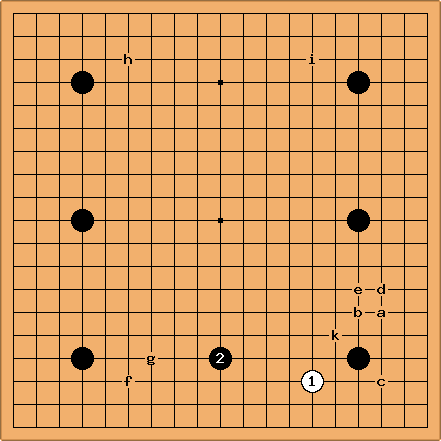 Now that you added the link cutting lantern procession I do understand your question. I am convinced by my reply to your question 3. A speedy opening with global perspective is more important in high handicap games, in my opinion. See it as large moyo to be reduced from White's perspective. You simply don't have time to fuss about small issues (whether there is a crosscut or not). White should try to distribute some stones on the board (I think of Iwamoto's "machine gun Go"). This only works if White takes local sente several times. My advice for Black is "don't let White take local sente", put on pressure, pincer/attack/split. That's the good attitude. With the necessary (black) mistakes, errors, oversights, slight or grave miscalculations or White's bluff poker (sometimes) this will not always work. Personally, I would not attach much importance to the question a or b or e or

in dia[1] and rather play

Was the idea of the horse face to build a moyo? I got once the advice from Feng Yun (in a different Sanrensei Fuseki): "Don't build the moyo to early". I pass on this comment (if that was your idea). I find

in [2] the easiest and most consequent choice to keep the initiative.

is wishy-washy and a (or b) leaves less options for White. But we are here to question conventional wisdom. Clearly, a move that adheres to the principles of connection, that is played on the fourth line and that is the first move by Black, cannot be a bad move at all. If worse than a, it should only be slightly worse. 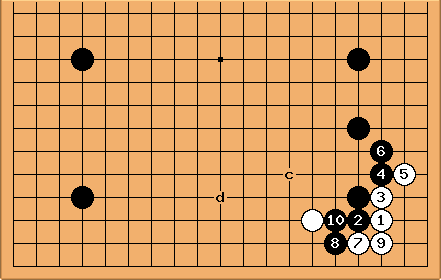 If we first look at the 3-3 point invasion, White ends in sente. 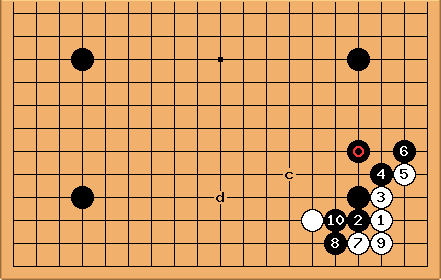 With the marked stone in place, Black can play at

It makes sense to more firmly defend the corner that is approached than the stone at the side. In handicap play, leaving more options to White is generally worse. In even play too, I guess, but I have seen it as some kind of strategy. In any case, if I were to play White and you play the two moint jump, I will not fool myself into thinking I am catching up bigtime.

(above), following the White invasion of

, the correct direction of play? While the position of the marked Black stone is not ideal, the mid-side star point is ideally placed. The extra stone may help Black control the side given the strength difference of 6 handicap stones. 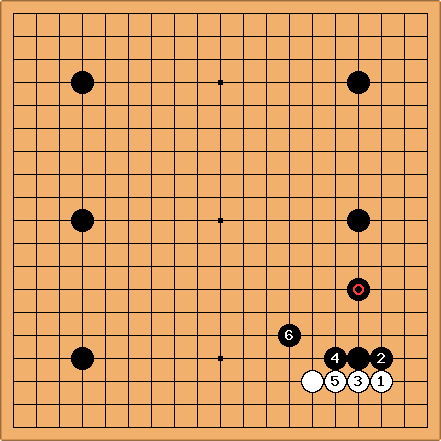 Bob McGuigan: I think Black is overconcentrated on the right side. Granted this might not be serious given the six-stone handicap but still we should try to play the best moves all the time. One way to think about this is that Black would not play the

wall were already there. Another way to think about it is that the starpoint stone in the middle of the right side is a good extension from the black wall so having the

stone there is using two stones to do the work of one, i.e. inefficient. 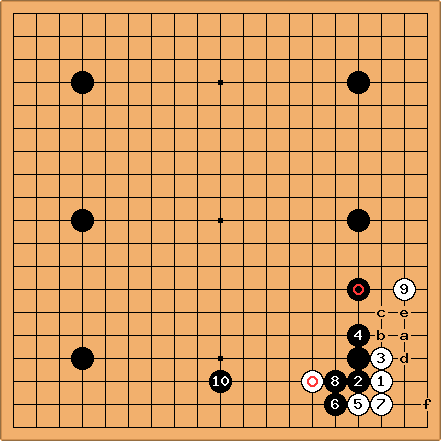 is so far away, White can play

is honte, I believe. This is OK for Black, I think.

Velobici: The result immediately above is very different from that in the first digram (see Dieter: Conventional wisdom above). Here Black is able to play

providing a pincer to

...something that was missing above.

is on the bottom side, Black can play at a, which is severe.

is an example of a seemingly passive play that is really an attacking play. :-)

Even so, this diagram does show a problem with

is on the bottom, meaning that White does not play again in the lower right corner before Black, then after Black a, White is dead in the corner, no?

zinger: I don't think so. If

Notochord: How about a-b-e, then? 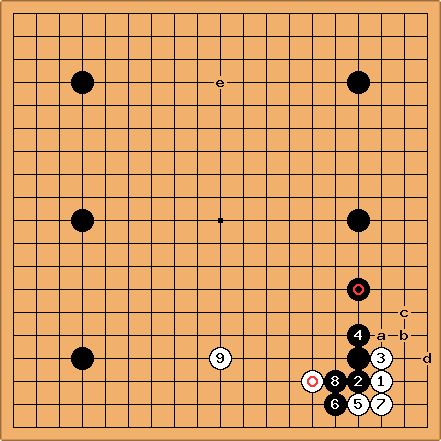 tderz: dia.[5]: My main line would be taking local sente Ba_, Wb, Bc_, Wd, and going for the globally big point Be (sanrensei). 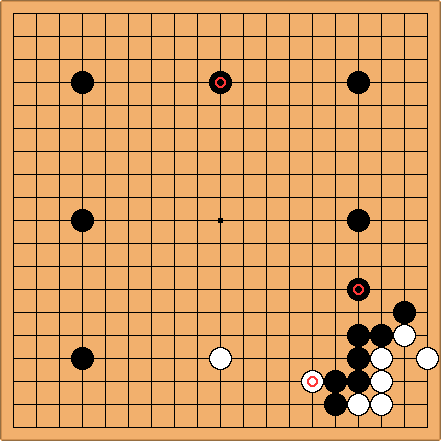 dia.[6]: But, ok, the question was "Can black kill?" Basic diagrams are

Conclusion: White lives - keep it that way and take the great points! 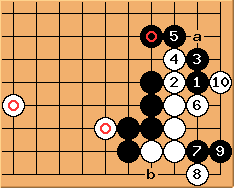 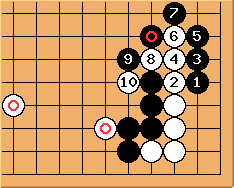 dia.[8]: Black is stubborn. Because of [9] I would not recommend this. 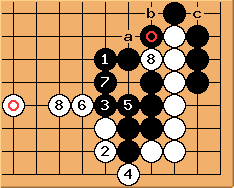 , White lives, is out and Black has cutting points at a, b and c. 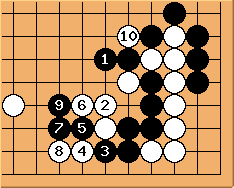 ... she collapses.
White has bad shape 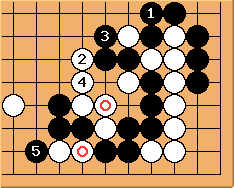 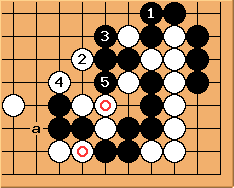 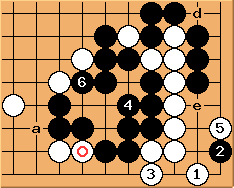 should simply capture. Before you laugh, check out dia [19] first.
W has a small life in sente (no need to play e) because of the weakness at d (cf. [13] below), but
B dominates the board. 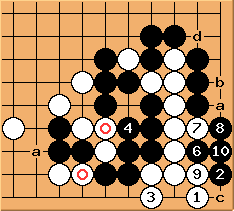 dia.[13]: If White wants to avoid death in the corner, 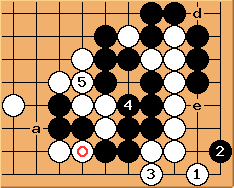 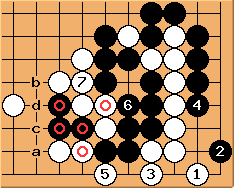 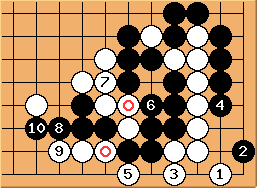 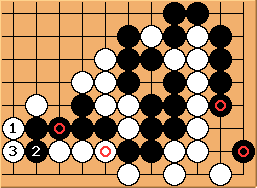 dia.[16]: seems White could play this way if there are no blunders in between... 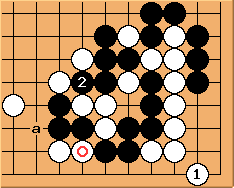 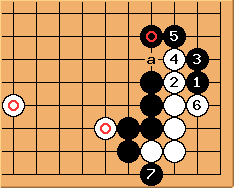 unkx80: It should be pointed out that

reduces White into a standard L-group dead shape. What happens when White subsequently plays at a, I do not exactly know.

tderz: thx, I should pactice more.