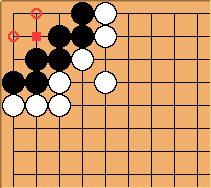 If there are no outside liberties, this 6 points large eyeshape can be turned into territory or seki. Either

lives with 5 points of territory. (

also does that, but White will have one ko threat in each case and that threat will be smaller after 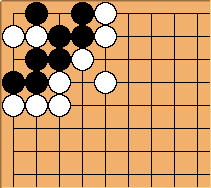 Whether White should begin with

depends on what kos might be created elsewhere before this seki is reached, as well as on whether eventual reducibility to bent four in the corner means death. 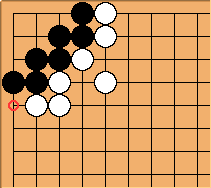 If there is at least one outside liberty, Black is alive with 5 points of territory. 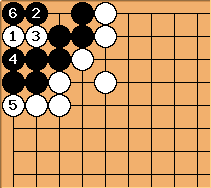 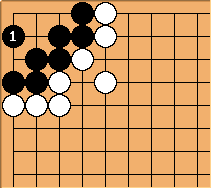 When the last outside liberty is filled, Black 1 makes 5 points in gote (deiri counting).

(As I don't fully grasp miai counting I'd rather have someone else talk about that.)

SAS: Note that 5 points is only correct under Japanese/Korean rules. Under almost any other ruleset the deiri value is only 4 points, since Black would have a point in the seki anyway. As usual for double gote plays, the miai value is half the deiri value (so 2.5 or 2).

The Count: Under area scoring, if Black plays first, he gets all of the "gun six" points (6 more than White). If White plays first, she gets 2, Black gets 2, and 2 do not score (Black and White have the same number). Therefore, the deiri value of a play is 6 points, not 4, and the miai value is 3 points.

Harleqin: You can actually see those three points: 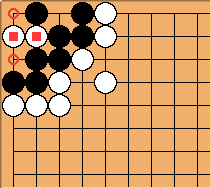 change ownership from Black to White, for one point each. Both

change ownership from Black to neutral, for a half point each.

By the way, every move counts one point more under area scoring - the point it occupies.

The Count: Of course, you're right H, but it is perhaps a bad place to mention it, since in this example Black has an eye in seki and White does not. So under Japanese rules, the miai value of a play isn't 1 point less than 3, rather it's 2.5. Could we just remove the erroneous statement above and say what the miai value of a play is under area scoring, Japanese rules, and territory rules without the special seki rule?