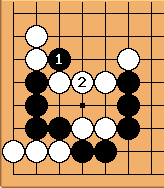 is my guess. Im new at go and I selected random page. Now it becomes capturing race black at the bottom has three libs and white enclosed will never get more than three libs in gote. Sandra

will make a bamboo joint and Black still is faced with the capturing race in the corner. So, either Black can win that capturing race by some special properties of the corner, or he can capture the cutting stones by playing another move. --Dieter

Sandra: Thanks. My thought here was if black now peeps from the right, and white connects at the star point, whites group has three liberties, blacks group at the bottom also has three liberties, and its black to play (preferably disconnecting white at the top right). But doesnt that work? 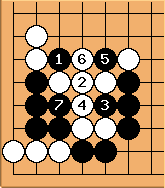 Oh, its double atari for black ☹ what a bummer. Dieter: that's not quite the point. Even with just one atari, 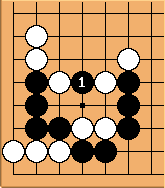 Does white have any riposte?

Sandra: This looks great. As usual with go problems: in hindsight the answers seem super obvious :) Looks just like the SlappingTesuji from Davies' tesuji book. (Actually, Sensei's page on that tesuji is better than the discussion in the book since it makes it explicit that it's about preventing a bamboo joint.)