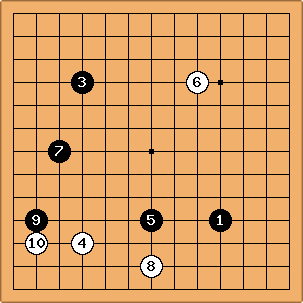 : took me a while to work out which corner to play for

: You can't get away from the fact that there are 4 of them and someone's gotta have them. We've got our 2. About time you caught up.

: Better to exploit Peter's bad move than to fix BenS's.

PPAdams: Yes, I did wonder about that.

: aggressive inroads into that corner then 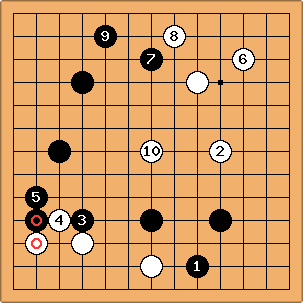 Migeru This is great, now BenS should be able to play a sente move.

: Not sure what I should be trying to plan for at this stage in a game... First time on a board over 9x9.. but I like this top corner..

Migeru Have no plan in the opening.

: If it's good for them it's bad for us so I better block it.

: I think the bottom left is safe now, and the forcing moves don't seem to improve our position that much, so I think it's time to join Ben in the top right.

: or is that benign? I'm no good at invading so I'll leave that to my more esteemed colleagues.

Migeru: That is good for helping

: There is nothing urgent. 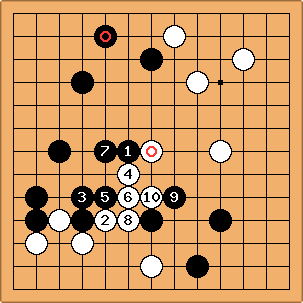 : begin the fight for the center. I believe this is a reasonably defensive play but avoids being focused at the top or the bottom

PPAdams: I don't think I like touching the white stone. It always seems that you've reduced your free sides by 1 before you even start. Maybe I'm wrong to think this.

Migeru: I think you're right. As a rule, you attack from a distance and defend in contact. Contact plays will tend to strengthen the opponent's structure. What this disagreement means is that Matt thinks he's defending, and you think you should be attacking. More about this after the dust settles.

: I previously thought this exchange was pointless -- now it seems useful.

: Think it's up to Migeru to do something clever for white now....

Migeru: Neither do I, as a matter of fact.

: I think we win the semeais and ladders here.

Migeru: and good shape, too.

: Boring, but I think it works out reasonably.

Migeru: About time we fixed the bad aji of

: I think we unfortunately need to do something here.

Migeru: If you're going to peep at the cutting point and extend you might as well have played at 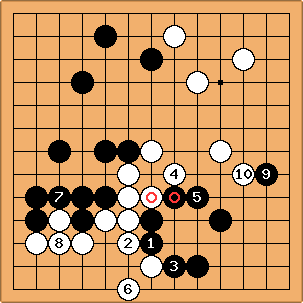 : Have to respond to

somehow. This seems the least negative

: Not much choice, really.

: can't let you flank this position from underneath

: A bit painful to ignore the bottom, but I think this is more important.

: How annoying, didn't want to have to play here.

Migeru: Of course, you wanted to play at

, which would have been a big sente move.

: Not feeling inspired today. Will leave the imaginative moves to the others

MattHope This can be effective in the Rengo nathan - forcing the stronger player to play an equally unimaginative move. There is a cost in that we lose a possible ko-threat as well as the risk that the move is no sufficiently important so that the other player gets a chance to make their big move...

Migeru: I like it that Nathan is playing mostly natural moves. In this case, the price of not replying is a 10-point swing.

: Think this secures almost the whole bottom corner as our territory - my counting is rubbish but I think this is worth about 6-8 points

: Might as well put a bit of pressure on the black stone. 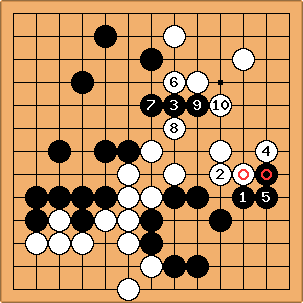 : I hope I haven't missed something

: As a matter of fact you have, but (overdramatizing a bit)

takes away our last chance to make up our disadvantage. I think we're over 20 points down, not even counting komi.

: Our position has collapsed, but I don't think we're losing so badly that we need to resign. We will lose by at least 9 points. 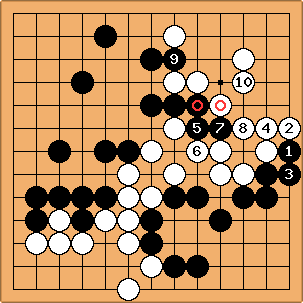 : after careful thought I have decided to go with PlayDoubleSenteEarly advice

Migeru: As BenH said, this is not double sente because Black has 2 stones on the 2nd line, so white's play would be gote.

: That move is sente, but not double sente, I think. It still doesn't hurt to play it, but it's less urgent.

BenH: I might have been tempted to play this one further to the left, to reduce the damage from

. What do you think, Miguel?

: Let's see where this takes us.

Migeru: Geez, Ban, you just gave up at least 10 points!

PPadams: I was wondering if there would be something over here at the end of the game but defending

was the more pressing matter to attend to.

Migeru: I cannot fault BenS for not reading Black's cut just below

correctly (or at all). 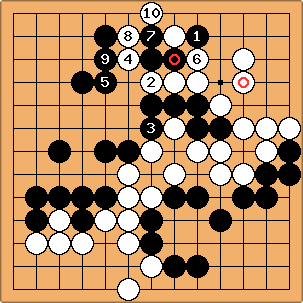 : Perhaps I can jump further - but this seems deadly enough.

: I think Nathan gave us a couple of points back.

: Maintain the pressure - see if you crack

Migeru: Go Ben! This is called mutual damage. I wish you had applied the same principle at move

: Ok, I'm pretty sure this isn't the best move but I'm worried about what will happen if I go the other way.

Migeru: I think we're back to losing by less than 10 points.

: I think I read this sequence out correctly...

: You should have let those two die Nathan - in (futilely) trying to keep them alive it allows white to strengthen their position at the top where we are weak without introducing any bad adj (or even a decent ko-threat). Time to Just shore things up and take a win by 7 or so points plus Komi

PPAdams: I thought we could keep them alive (just). I could be wrong though. Required a black play 2 left of

I think in a few moves time.

Migeru: I thought white could kill with a white stone to the right of

PPAdams: BenH has shown me that I'd missed how the weak black group in the centre complicates things.

: I thought it was complicated if W tried to save the stones. But I'll take them anyway.

Migeru: I restored the captured stones, it is hard to read the sequence otherwise. 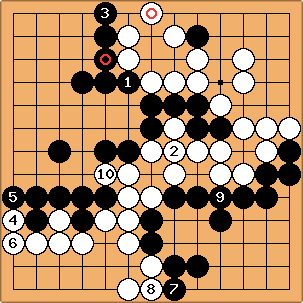 MattHope: I think this is a clear case of Attack while dozens of points ahead I think my

would have been much better off shoring up the top left instead. <sigh>

would have been better at

, but I think the mistake was not playing

: Hmmm.. Feel I should be attacking but can not see where. So I'll think small and protect the one white stone that's almost surrounded.

: you took care of our only sente move, pretty much.

: if it's any consolation BenS your move only lost two points (and sente I think). we should win by about 7 + Komi now

should definitely have been at

: I think that removes our last chance for a mistake. 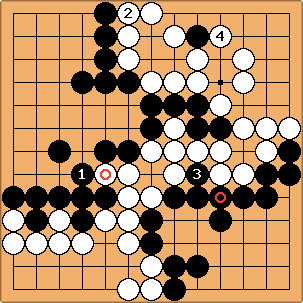 : At what point do we admit defeat?

Migeru: If you have nothing better to do than play in your own territory, you pass. After both players pass consecutively, the game is over.

MattHope: Technically speaking this is not always true (though in most cases it is). This is (to me) one of the only two rules that can be confusing and vary significantly based on the rule set you are using:

Pass - in most cases the intent of both players passing is to end the game and move to the Scoring phase. With ChineseCounting an easy option exists for dealing with groups where the live or dead status is disputed. Simply continue playing until once again you get a double pass at which point the status should have been decided. With JapaneseCounting this is not an option without maintaining a bit more state or using a somewhat more complex rule for the 'secondary' phase