How do you find a ko?

First of all, there is no reason to play a ko if you do not have to. However, kos are often the last alternative to keep a group alive. If you have a group which would die if left alone, it can make good sense to turn it into a ko. (Although, of course, you shouldn't do so if there are other plays elsewhere which are worth more than the ko you are creating.)

This is something which really has to come with experience, just like evaluation of the status of a group does. After a while you will recognise which apparently dead shapes can become ko, and you will also be able to recognise those of your opponent, so that you can avoid a ko-fight, should you need to. 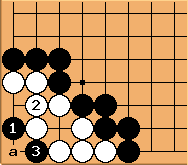 As an example, in this situation, Black can force the white group to live/die through ko by the sequence as shown. (Black must find the first ko-threat after White a).

If you are well ahead in ko threats it is a good strategy to force plays which may result in ko. For example, instead of reducing the opponent's territory by 4 points, why not start a ko that (if won) reduces the territory by 12 points. If your opponent retreats, in order to avoid the ko, you reduce the territory by e.g. 5 points.

In that case the mere threat of playing the ko sequence (worth 12 points) will force your opponent to give in? and you can reduce his territory by 5 points instead of 4 points - a gain of 1 point without playing ko or wasting ko threats. Do this several times accross the board and you can easily come up with 10 points or more, by threatening a ko, without actually playing one.

This concept illustrates very effectively, why thickness is such an important concept. If you have a thick position, your opponent does not have many ko-threats against your position. 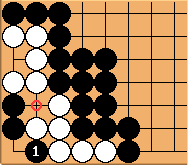 iopq: This was a position in my game. Instead of connecting at the marked point, I decided that I was alive due to my "two eyes" forgetting that I wasn't connected. My opponent waited when he had a big ko threat and then started the ko at 1! I will never mistake ko for life and life again. He ended up taking this group - it would be worth the extra move to connect. Worse, the group that was surrounding me (not shown in its entirety in this diagram) would be put in atari so he managed not only to get rid of my biggest ko threat, but also kill my group at the same time.