He is also a professional teacher, having obtained a 1 shidoin (not same as shodan, also not easy to obtain) certificate from the Nihon Kiin.

Since 2002 he has been working for the Université Paris-Dauphine and since 2000 he has been affiliated to Germe, a provider of professional coaching and training based in Nantes, France. 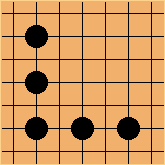 Obviously this is a minor piece of trivia. I noticed when replaying Farids games, that the following shape appeared several times. Probably it says something about his style of play.