This variation on Go consists of black and white playing at the same time, sharing the turn. Both players chose a point before playing, then they check whether those moves can be done: if the moves coincide, it's a ko (used in the sense of illegal move) until the next move has been played.

The f stands for 'Fair', since it's a strategical disadvantage to reveal plans or intentions.

The game becomes more difficult one could say, so it's recommended to be close to sdk before giving it a try; it has interesting pedagogical features concerning timing, sente, ko, miai and more.

Formal rules are listed below. Let's see an intuitive approach: 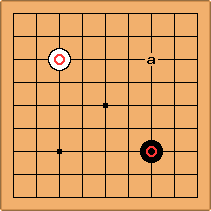 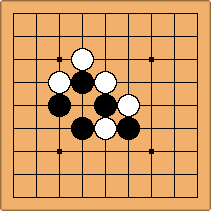 Another rule: the captures are made in relation to the situation on the board before the move.

If each side captures... 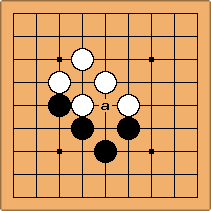 a was a capturing stone, but it has been captured. 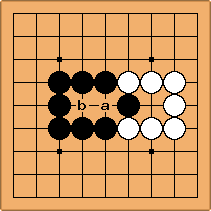 In this position, if white plays a and black plays b, white's move has no liberties and is removed from the board; but it's perfectly legal, since a in the original board is not captured. 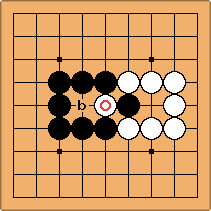 In this example white does have the stone W. Unlike the first example, white b is 'deliberate' suicide. This remains to the election of the players; F-Go can be played according to New Zealand Rules.

Alternative Rules for F-Go with Bargaining

Instead of the first rule:

F-Go with Bargaining has simultaneous potential to be both more cutthroat, and more fair. In theory, the leader can use ko ultimatum to reduce the odds of an upset. Two friends who agree not to quibble over small stakes can use this variant share their understanding of Go.

MrMormon: (there might be another article or L19 post on this, but I'm not sure) The first problem with simultaneous moves is that there may be a case in which there are no possible moves for either player besides the intersections they already simultaneously tried. I can't think of another way to handle that edge case besides either voiding or immediately scoring the game. The second problem is when the end of the game is near, the only remaining moves besides the big ones that can't be played are playing in one's territory. Obviously, then, both players should pass, so the real second problem is that some big moves will never be played. That's not my preference.

Lancer: I don't see why it's a problem ^^: if yose is not trivial for at least one of the players, it will be played.

Slarty: If players reveal their choice at the same time, F-Go will include an element of randomness (players play mixed strategies - e.g. will you spend a move defending or tenuki?). Another variant exploring this, apparently played in Korea, is roll a die to determine whose move is next. For F-Go, if the players "talk over" their moves beforehand, the game should behave something more like Go. (This will another ko rule). Jolly good stuff. Reminds me of ChoiceGo.

MrMormon: There should only be randomness if the two most important plays are equal in value. If you want to talk about a game with a lot of player agreement, try Go Back.

Slarty: Here two diagrams I've come up with considering your statement, MrMormon. The finer issues are ko and what we mean by a 'play'. F-Go plays are simultaneous, and even in normal Go, white and black's move of choice in an area can be a line apart. This example probably needs to be explained. For now, I claim these will reveal a mixed strategy is necessary, and that with communication beforehand, the result is much more peaceful!

If black always plays a to take the two stones, white will choose a as well. When a is illegal, white has an advantage.

Studying these positions gives a flavor of F-Go. Open board situations are great, but hard to pin down, so far. Whereas this example can be worked out precisely, once the rules about passing and counting are complete. (Open call for more F-Go examples of interest!)

ArsenLapin?: Slarty told me that in the case of a semeai that ends in a tie, like in the diagram, both players' stones should be captured. I thought this could be declared a ko: Black cannot capture the white stones and White cannot capture the Black stones.

Lancer: This is the same as in the 3rd diagram. On the other hand, it can be a ko if there are 2 shared liberties.