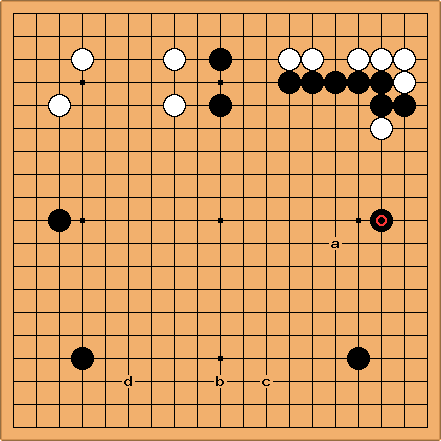 Charles My first thought is that White a (knight's move cap) looks quite useful, here. Of course the lower side is a big open area, and White needs to work out how to play it, before forming a definite plan. Is b far too placid, white is very one sided here.

Imagist: From the count of the stones and the fact that it is white's move, this is a 2 stone handicap game, which explains the one-sidedness of it.

I'm just 3k, but it seems to be that if white plays b, black c, white d will follow, leaving black sente to expand his moyo along the top. Personally I would feel more comfortable reducing at a, since even if black plays a nirensei along the bottom, that isn't solid territory. With black's wall along the top as solid as it is, any expansion there will likely become permenant territory.

kb: IMHO, White is behind even in an even game.

could be one line up and Black's position would be really ideal - even if the bottom left corner stone was White I would *still* take Black's position. I feel White has played too rigidly at the top.

Charles' suggestion is a great place to start, though. Black might respond placidly and take 4th line territory, but at least White can begin to break up that moyo - anything to reduce Black's massive influence along the top.

The bottom side is probably the next highest priority - continuations there now might damage White's chance of a later 3-3 invasion or sabaki sequence.