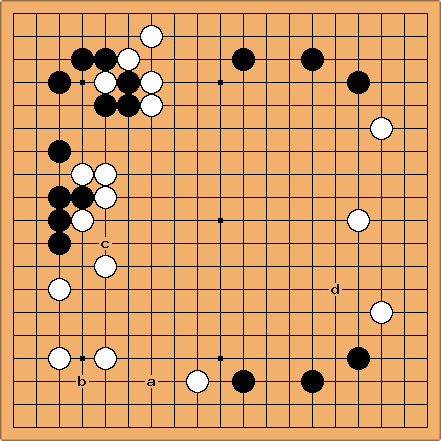 Andy: I'll take a stab. The right side is symmetrical, without knowing which side to play on, I'd leave it alone for now. No matter what white does there, black will get good counterplay. That leaves the lower left. There is an obvious place a at which to aim, the question is how best to use it. Maybe come in at b looking to either live in the corner or get good play at a leading to an eventual expansion of black's lower right and reducing white's points in the center.

heh. obviously I'm no threat to Onoda. is it too good for white to allow another white stone first on the right?

ZuluOne: Beginner as I am, I think the opposite. All of the stones on the right are very low, so there doesn't seem much room to invade around there. This also means there is no particular influence in the middle from that side. I'd prefer to reduce white's moyo on the right, meanwhile trying to get the two black right-hand corner enclosures up into the middle a bit. OTOH, white's bottom-left looks very secure and ripe for expansion, whereas his top-left looks like it claims no territory. Somewhere like c would put pressure on the left and threaten to break out to the centre, but the region of d cuts out a bit of the huge, empty space, also extending black's framework up. Or maybe I'm being ambitious?