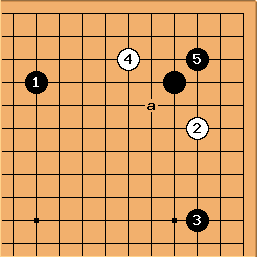 , the second approach, is a double kakari. In response Black plays

is the double hasami; or, you could say,

creates a position in which Black has been pincered twice.

It is best to play this way only when

is previously played (or is already there, in a handicap game). Black is guaranteed life in the corner, with best play; and can cut if White tries to seal Black into the corner. Then White will have two weak groups and a difficult game.

This is a tough-minded strategy, forming an exception to the idea that one should not become shut in. White can indeed shut in the corner with a play at a, now. Black will be able to cut White, and White shouldn't be able to kill the corner.

See BQM48 for a fuller discussion.