Don't Play On The Point Of Symmetry/ Discussion 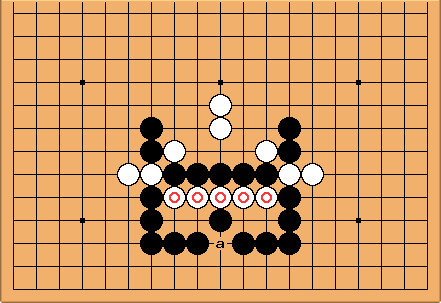 Rakshasa: Not to ruin you nice page and all, but the point of symmetry is as good as the asymmetric ones in the problem.

f3etoiles What ?? Playing anywhere on the axis of symmetry fails in all those problems. Are you sure you have really studied them ehough ?

Rakshasa: I've been following this page for a while and I fail to see it's... point. The other page is interesting because in certain situations the point of symmetry should be looked at first. This page covers all those situations that weren't symmetrical?

f3etoiles :his page covers the (rare) situations which are symmetrical, yet where the key (or should I say the keys) to success is to break the symetry

Rakshasa: Will you be making a page for Don't always take off stones captured in a ladder, at the earliest opportunity? next? ;)

f3etoiles No, but I'll use the opportunity to ask something else : has someone a copy of this incredible problem (from Hatsuyoron, should be around pb 150) where the key is to connect a tobi with no adjacent opponent stones (to prevent a warikomi without losing liberties)

Rakshasa: I was too quick to assuming it was white to play, cause black playing on a point of symmetry here doesn't make any sense at all. Shouldn't these problems atleast have moves at symmetrical points that atleast *look* like they might lead somewhere? A ponnuki is also symmetrical and as good an example as the problems here. (Though i do admit two of the problems require reading a couple of moves if you are unfamiliar with the shape)

f3etoiles Mmm.. (about your pushing instinct) what do you say about the position below then ? 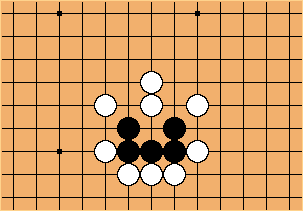 Rakshasa: In that example, you never look at the point of symmetry that is the solution untill you've figured out what needs to be done. Different from seeing and discarding it.

My point is that just because a position is symmetric and the best moves are not symmetrical, doesn't mean that there should be a proverbish page about it. Having now looked at the Play on the Point of Symmetry page, I think i've realized why this page doesn't make any sense to me.

Play on the Point of Symmetry seems to indicate that you should always play on the symmetrical point. Which makes this page just as wrong, but in the opposite direction. I don't know how such a proverb appeared, perhaps it wasn't translated properly or maybe it was... dunno. Shouldn't it rather be something like, "look at the point of symmetry"?

And then you end up with: "don't look at the point of symmetry"...

Bill: A straightforward translation of the proverb:

As with virtually all go proverbs, there are exceptions. This page plainly states that it is about the exceptions to that proverb. What is the problem?

Rakshasa: One of the problems it the title. Do play there, don't play there. The first example does illustrate asymmetrical plays. But the second, the instinct is to push out. The symmetrical point is quite clearly not the right one. This is also true for the third example.

And finally, i think the proverb has been translated to being too forceful, which makes this page topic seem bad to me. Unless i've misread the above proverb, it only suggests there's a play there.

Bill: Yes, Go proverbs in English do seem to be overstated, in general. Then, perhaps, the exceptions need to be pointed out more forcefully, too. ;-)

Rakshasa: Or perhaps it should be put where it belongs, in the original proverb's page. This page will be misleading and cause confusion imo. As long as you interpret the proverb wrong (which is very easy as it is written) then this page will only confirm it. Two wrongs don't make a right.

This page should imo be renamed to something else and the original proverb page made less forcefull... Instead make it clear that it is only a suggestion for where you should look.

The reason I reacted so strongly to this page was that it messed up my logic circuit. You can't have exceptions to the original proverb, at least not the way I interpreted it. In a symmetric position, when do you not look at the points of symmetry? You should always check them.

Bill: You might want to look into non-monotonic logic, which admits exceptions. See, for instance, The Logic of Conditionals, by Adams (D. Reidel, Dordrecht, Netherlands, 1975), in which he establishes the soundness and completeness of non-monotonic logic. Non-monotonic logic is close to natural language reasoning. Most go proverbs have exceptions, in any language.

Now, both apply to the same set of positions. And both are equally forceful in their claim to where you should play. Both are correct only for a subset of the symmetrical positions. Now i don't know much about non-monotonic logic, but it seems to me that this isn't right. The defeasible inference that we should play at B is not applied to a subset of symmetrical positions, but rather the whole set.

Bill: No, they are not equally strong, as the text indicates.

Rakshasa: The titles indicate they are equally strong. Which is what i'm mainly objecting to. And whetever calling them exceptions makes one weaker than the other is questionable. They are excepted, but that does not nessesarily mean there are fewer cases. You can also look at it the other way, playing on the symmetrical points are exceptions to this page's rule. From what i understood non-monotonic logic, subsets of a generalization could override the generalizations, but can they have conflicting statements on the same set? (Kinda like inheritance in OO programming) Anyway, i propably shouldn't continue to abuse what little i read about it.

Bill: If this page were presented as a go proverb, I would object, too. But it is not, and the other one is. :-)

You have two statements that are equally strong, and apply to the same set. But they are mutually exclusive. From the quick reading of non-monotonic logic, it didn't seem to allow that. Though i might be wrong.

Notochord: I don't think that they are equally strong claims. The majority of the positions given here are explicit constructions of counterexamples to the go proverb. They are all go problems, created through unnatural play. Where the go proverb talks about playing on the point of symmetry, it is of course generally giving us advice as to how to play go. So the degree to which we hold it valid should be weighted by how often it applies in naturally ocurring play. In most natural symmetric positions (eyespaces, some corner situations) the original proverb applies most of the time, even when things get fairly complicated. Proverbs are based on observations of people playing go. Go problems are often made to create a bestiary of unusual positions that violate general observations of the game.

Rakshasa: As they are stated, they are equally strong claims. And quite absolute. The proverb is supposed to be an advice, but it is not put forth as if it was just that.

Notochord: We could go even more boltheaded than that and say that these proverbs apply equally as strongly to non-go games. There is implicit information in these kinds of statements.

Maybe by 'claim' you mean (to clarify by my terminology) 'proposition'; the wording of the proverbs. I was talking about truth values of the two propositions, pointing out that 'don't play on the point of symmetry' is likely to be by far the less true. So I think that I agree with you in the sense that this page is not a proverb, and it should not be treated as such: it is a bunch of counterexamples telling us not to take the proverb too literally.

But if you take issue with the 'absolute wording' of all proverbs, then we have a lot of editing to do. Proverbs are implicitly loose advices based on observation, worded (often strongly) so as to be more memorable. Hence '(Taking handicap) if you lose all four corners, resign. If you win all four corners, resign.' Obviously stronger wording than the meaning that we are trying to get across. There are dozens of proverbs with absolute wording, but understanding them as proverbs, that hardly means we should take them literally. Of course, this means that it is in general good practice to make sure that it is clear whether we are talking about proverbs or not. Sometimes wording is enough, but other times it is not. I would classify the 'Don't play on the point of symmetry' as neither a generally (or absolutely) true statement (we shouldn't avoid playing on symmetric points, really), nor as a proverb in its own right. It could be considered an auxiliary proverb, telling us to take caution in interpreting 'Play on the point of symmetry,' but I'm not sure that it even comes across as true enough for that.

Rakshasa: If you read the translation of the proverb Bill posted, it is clear that it is not as forceful as the proverb used here. Yeah, you have exceptions to forceful proverbs. But should a proverb be forceful when there are exceptions 1/4, or even 1/10 of the time?

rubilia: On some other issues, I am far away from going with you, Rakshasa, but here I agree. The weird, misleadingly universal wording of many (English translations of) Go proverbs really turns me off. Since I recognized how useless they are (not at least compared to real life sayings), I don't care about any Go proverb anymore. Nevertheless, I am sure there are true general advices possible, and if Go proverbs were worded more thoughtfully, probably most of them would be good candidates.