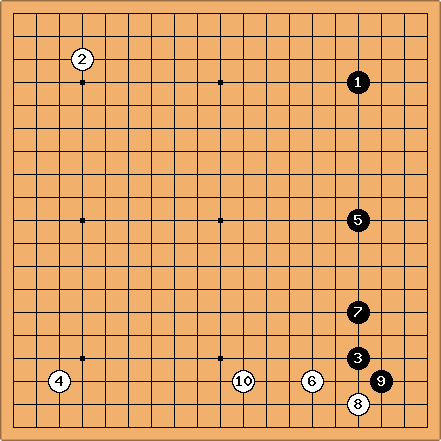 As you may have noticed, these games are all from Otake's starting period in the early sixties, against not too famous opponents. Here Otake takes White against Sato Kaoru, who opens with a san-ren-sei. Otake plays a 3-3 point in response. White's opening is low. 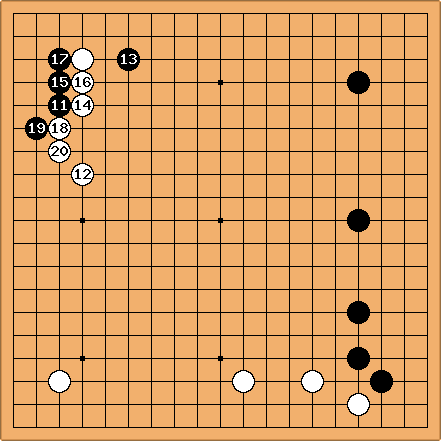 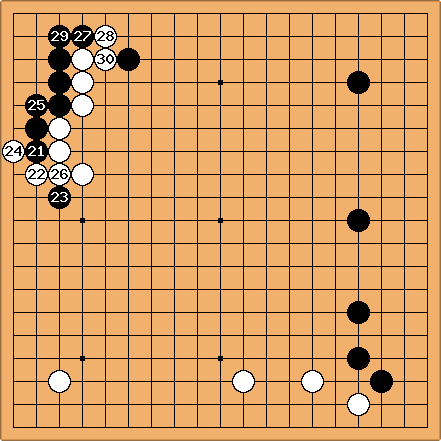 The joseki ends with

. Keeping a balance of solid territory and central influence is a hallmark of Otake's style. 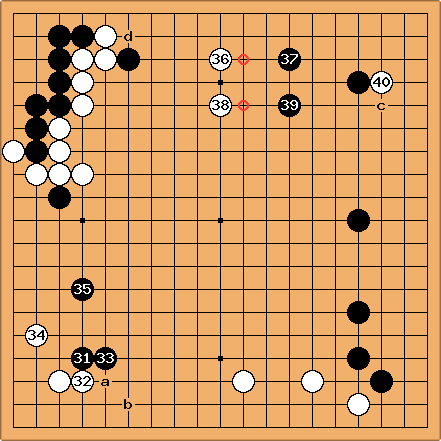 seems inevitable, but maybe Black should just have stayed away from this area, as neither of the usual moves looks very attractive. After

, the corner joseki usually continues at b but it is clear that Black a is not a good move against White's solid lower right. This allows White to tenuki at

was an easy guess.

looks close to white's thickness to me and

looks like making territory from thickness. Any thoughts on these two proverbs in this context?

Dieter: I agree with both remarks, as a trigger to think more about these moves. At first

seems too close to the wall. But then there is the aji of d. Also, after

, White's wall is still influencial but the room for eyes can dry up fast, so essentially

is a move for thickness.

is very much the same idea, I believe. Otake often plays the ikken tobi when it is available as an obvious means to create strength. But both moves would have made more sense at the circled points. Then

would have truly created miai at 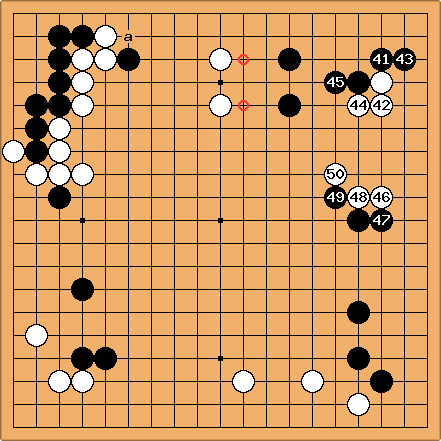 from stylish Otake. That's prejudice for you.

is the forbidden move of the Ghent Go Gathering as I continue to tell my fellow club members, but then my own guru plays it. Of course I understand the ploy: White wants to settle fast and accepts a strengthened potential territory for Black. 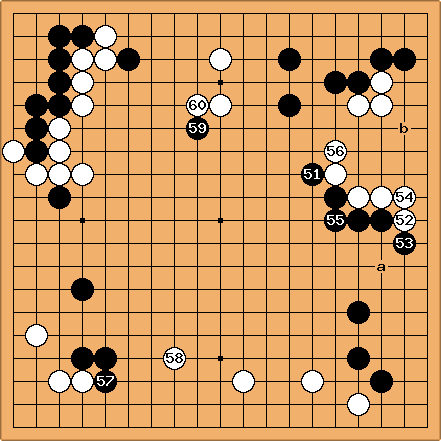 , allowing Black to reduce the moyo with

. Both sides have left aji at a and b respectively. 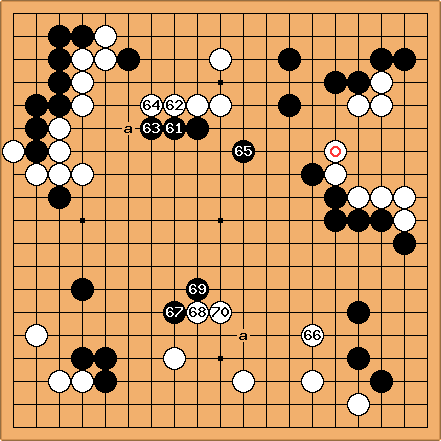 , pushing once more at a is no longer sente, so Black ties his stones together loosely at

is instructive: I'd always play a.

starts the highlight of the game: Black's attempt to create central territory with his influence and the relationship with the marked group. 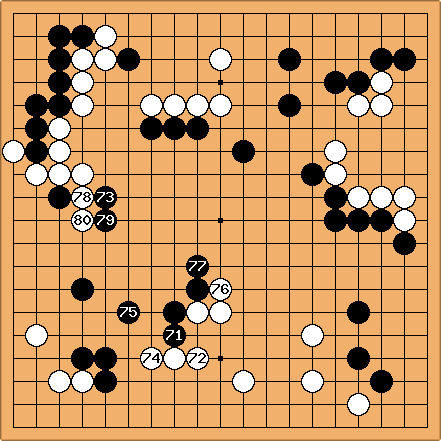 , Black's plans are clear and it is very instructive to see in which order Otake reduces the central territory. Especially

is notable: I would alway play the glaring turn of

are blatantly overconcentrated. I'm sure Black is now regretting his game plan. 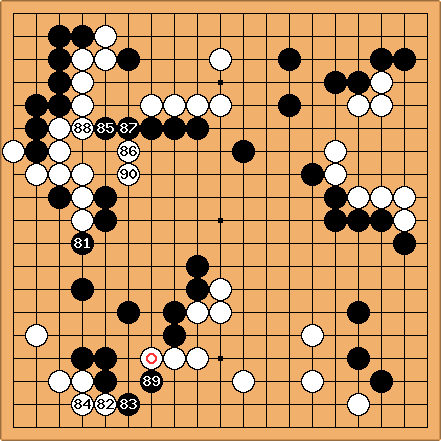 The added value of

comes to surface: White can solidify his corner in sente. I'm still puzzled though why

has provoked this sequence. The forcing move of 85 and White's resistance at

further reduce whatever prospect Black thought he had in the centre. The black chain that was originally part of the moyo now has become thin. 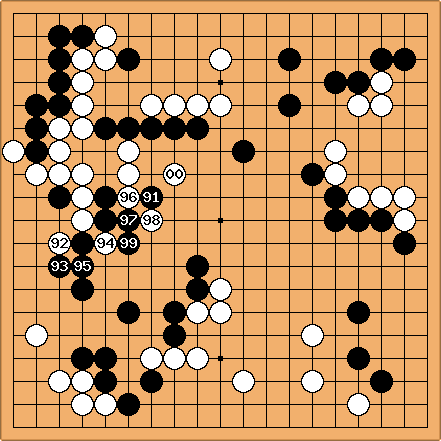 Sure, Black will get some points there, but the thinness of his top chain becomes a problem. 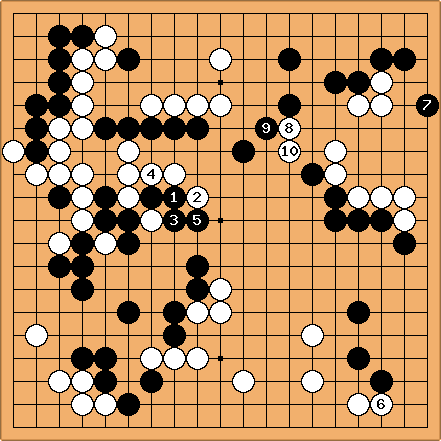 , Otake seems to be happy with the damage done and proceeds to the big endgame. Black resists with

but this only provokes the counter-attack at

Otake must have been waiting for. This is another usage of thickness: you can respond to your opponent's threats in a powerful way. 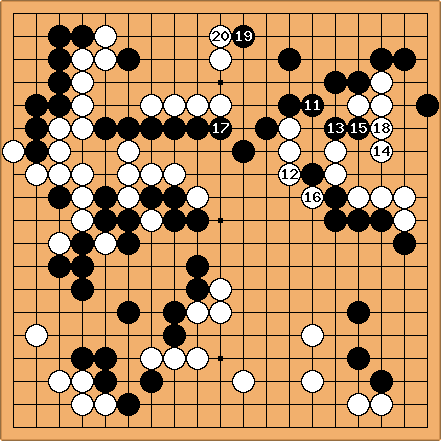 I didn't manage to prove it completely, but after

, Black's top group can be attacked severely so he responds with a connection. Then 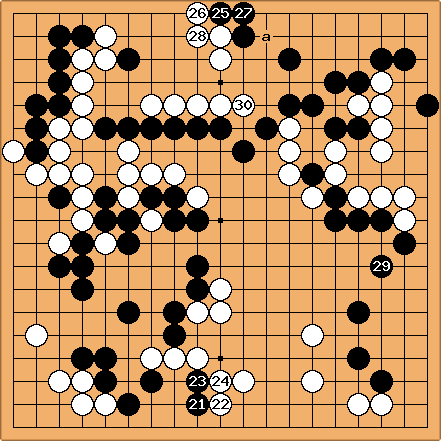 At least the follow-up is problematic: Black rushes to play sente endgame with

, fixing his last aji. But this hasn't taken into account the powerful

which threatens a while ruining the shape of Black's heavy group. 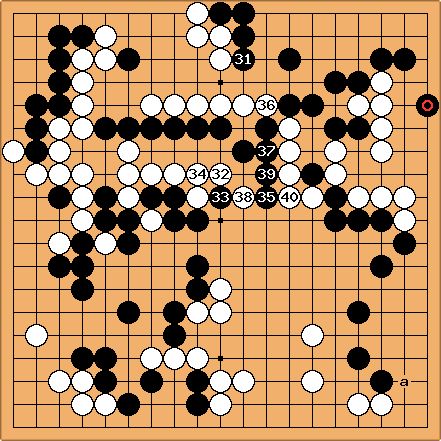 Black can't help but answering at

and give control to pilot Otake. The chase is on. The Black group will likely not be captured, but White will decide how the open central area evolves. The main benefit though lies in

which makes the white group fully alive in sente, making

gote and opening a chance for White to play at a. 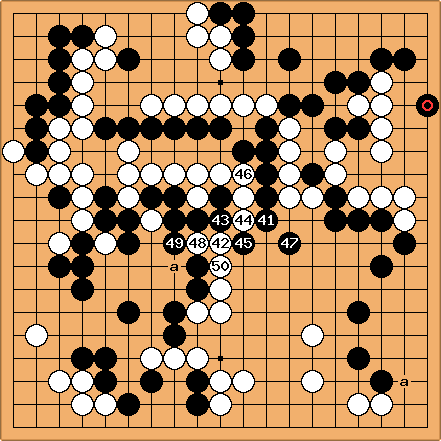 . The result of the attack is merely that Black needs to respond yet again but then White has fixed the marked attack in sente and can proceed to play a. 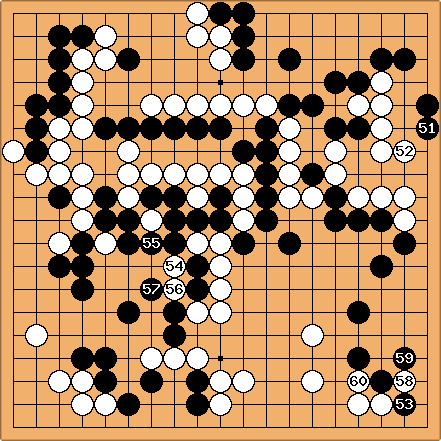 So Black tries to resist once more, with

, after having sipped the taste of sente at 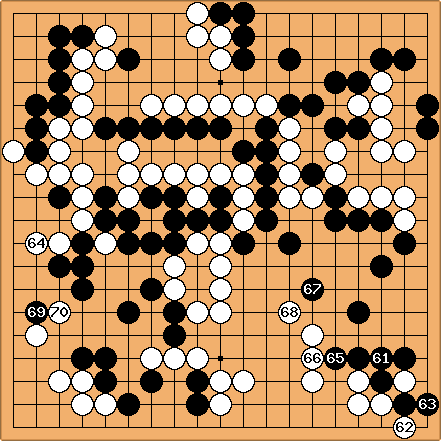 The way the bottom right is handled is new to me. I'd always expect

is huge endgame. I'm surprised none of the players went there earlier.

is instructive technique to me. In the late endgame this is a big gote. 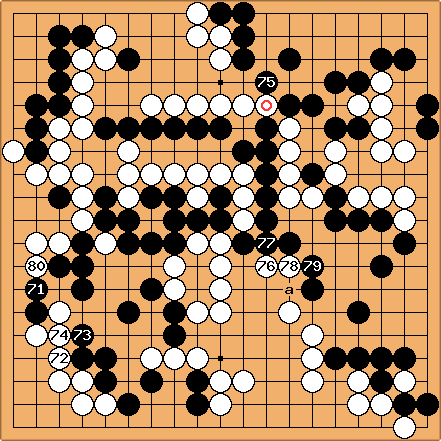 at a. I understand that

is big. It shows what a great move

was and how thick play has a lasting effect in the endgame. Anyhow, 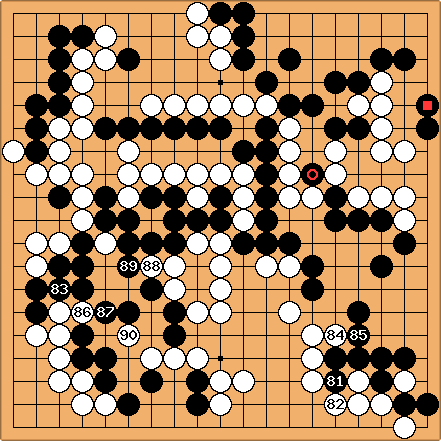 , thereby taking control of the middle game and endgame. The effect of thickness on the endgame is a returning theme in Otake's games, which is why I want to study them. Otake's way is the way I would like to play: gently moving forward until there are no resources left for the opponent.

Andy: Hane Naoki considers himself to employ a similar style, as he explains in his book The Way of Creating a Thick and Strong Game. I like this book and recommend it.

Dieter: I read about Hane having a similar style. I haven't studied him (nor Otake sufficiently). From what I saw of Hane in recent top pro games I thought his style was more solid then influencial. A bit more territory oriented too. But if Hane says so himself, it would be preposterous to deny it.