The Way of Creating a Thick and Strong Game

The Way of Creating a Thick and Strong Game("厚い碁の作り方 Atsui Go no Tsukuri-Kata")
Part 5 of the series: The Heart of Go Discovery Series 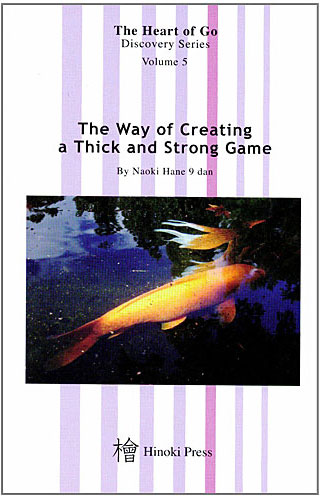 The Way of Creating a Thick and Strong Game English translation (by Robert J. Terry) of a book by Hane Naoki, published by Hinoki Press, distributed by Yellow Mountain Imports. 254 pages. ISBN: 9780978887469. The book is volume five of the proposed seven volume The Heart of Go Discovery Series.

There is an ebook version for iOS devices.

tapir (KGS 1k): This book is a collection of twenty-two game reviews, ranging from insei matches to his first successful challenge for a major title. I'm not a regular reader of go books in general and reviews in particular, but I like the presentation. It starts in the preface with the statement

"In order to maintain one's health, it is said that one should eat only until one's stomach is moderately full, 80% of capacity. And not only in go but in all games, one should be satisfied with an 80% result, not avariciously striving for more, overreaching and meeting with an unfortunate setback."

Reading the reviews however, most often 80% means omitting overplays that only give a good result when the opponent plays according to your plan. His praise of thickness intermingles with somehow modest comments about his play.

is the quintessence of my go style. However, it is only thick, and not very much otherwise can be expected from it, so it might not avoid criticism of being a 'bad move.'"

In my opinion this show of self-criticism is highly didactical and encouraging - and I propose to see this book as an antidote against overplay. Endgame play is generally omitted. On a second look however, it may appear that the book talks a lot about the right mental approach to playing (keep it simple, fight only if necessary) while omitting comments on the game itself - especially during more complicated fights.

Review by Shenoute at L19