The simplest example is an answer to a shoulder hit. 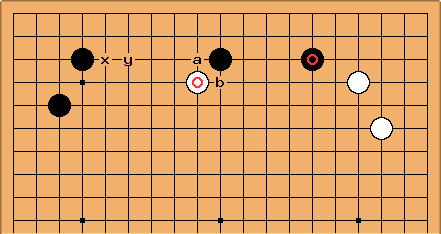 It seems that in the position like this most would choose b. But the problem is not that simple always.

Scartol: Okay, I'll bite. Why not?

Hyppy: I'll take a stab at it and say that if White counters with a, then Black would have two separate groups, which can both be attacked by one white group. Furthermore, White could play a two- or three-space extension along the third line at x or y to establish her own base, ruining Black's territory along the upper side. Just my guess.

Charles Matthews My first reaction was that Black's answer at b was the natural play. It creates a two-stone wall that is in the correct relationship with

; and it means White must run out (or risk having made a poor exchange). That way, Black avoids the feeling of having been forced, and corrects somewhat the low position of the 10-3 stone on the side.

There is, however, more to it, as HolIgor says.

The one pro game I came up with in which this happened was this (Kobayashi Koichi-Kato Masao 1997-12-11, colours reversed); in which

is played first and then

. There is another stone (

In other games White used one of the 'x' points to start on this side. In fact since Black has taken up quite a low position here, this area will not have high priority until the middle game; and then how to treat it for White is likely to depend heavily on other positions.

Going back into the position's history, the usual continuation here for Black is to follow the make both ends strong advice: 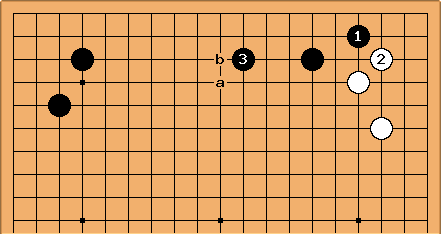 Of course Black at a is another idea for

at b seems very territorial, really.

Supposing Black plays this way, and later White plays the natural shoulderhit at a to reduce, the pro examples I have seen suggest that Black can choose between attacking or taking territory. 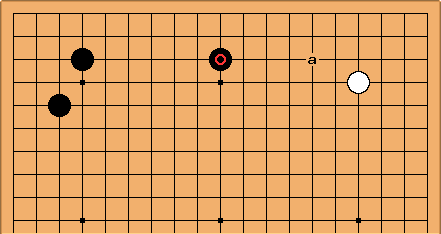 Therefore the initial position is more likely to come about via this one, where

is played before Black at a: which avoids White's pincer possibilities.