Path: <= All you ever wanted to know about sekis =>
Difficulty: Beginner   Keywords: Life & Death

Karl Knechtel: Surely I am not first to discover such things... 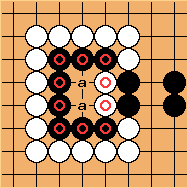 The marked stones are alive in seki assuming that the unmarked stones cannot be captured. A play at either a by either player is answered at the other a. 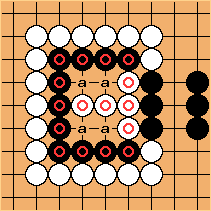 The same situation arises with longer chains of cutting stones, and/or more space inside (as long as neither player can win the semeai by making an eye or by some other tesuji). 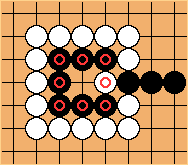 A single cutting stone does not suffice for seki; this is a snapback and Black is dead. 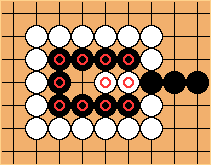 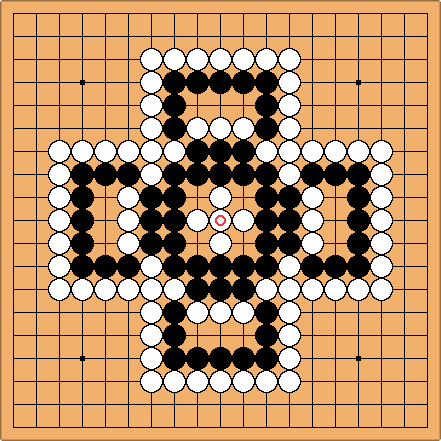 Just for the amusement value. All inside stones are alive in seki. Without the marked white stone, all black stones would be dead (white could first capture the inside group because of having an eye in the belly; then the seki is destroyed for the outside groups).

rubilia: I just was about to ask: are there any sekis without cuts? Of course, there are. The shape in the center is a simple example. For some more complicated ones, see Enclosing Seki.

Karl Knechtel: From a problem on goproblems.com: 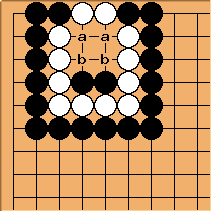 White answers a play at either a with the other a, and similarly for b. However, Black answers a white play diagonally opposite. This one is interesting in that the seki nature depends upon the cutting points, but White's group is not actually cut. It's also interesting that there exist four points which cannot be filled by either player - "normal" sekis have only one (one eye vs one eye simple sekis) or two (no eye vs no eye simple sekis). Which suggests the Maximum unfillable points in seki question.