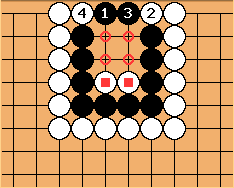 After this, nobody wants to play the circled spots : Black would actually commit suicide by trying to capture the

stones, and White would give life + points to the defender.

So, this is seki.

I have seen many dan players not be able to solve this problem. Apparently you can easily get stuck in your usual reading habits ... --Arno

In this case, a better sequence for Black is to play tenuki instead of playing move 2; and save it as a ko threat for later. --aigo

), black can kill the two white stones inside by playing that move himself. --Bass