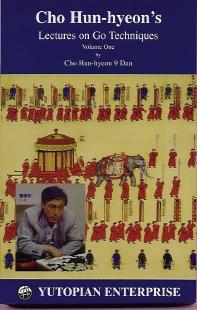 Lectures on Go Techniques by Cho Hun-hyeon is a three volume set (as of June 2014). The first volume focuses on the early opening while the second volume emphasizes the late opening and very early middle game.

The true value of these books lies in the numerous solution diagrams. For each problem, half a dozen seemingly reasonable but incorrect alternatives are explored and the reason why each is wrong explained in the text accompanying the diagram. Once the wrong responses have been dealt with the correct response is shown and explained. Afterward, there is an additional diagram showing the continuation from the correct answer. As such the book is much closer being several professional lessons on the early opening than it is to being a problem book. A player who can identify the possible answers, select the correct one, and know why the others are wrong, would be a mid to high level AGA dan player (3-5 dan AGA).

Volume 1 is a translation of the first volume of 曹薰铉对局技巧（全三册）(Cho Hun-Hyeon's Even Game Techniques (Vol 1-3) ISBN 7-80092-539-0). Volume 2 is a translation of the second volume consisting of 54 problems. Hopefully, volume 3 will contain 51 problems and be forthcoming from Yutopian in the future (as of October 2010) The other two volumes consist of 54 and 51 problems.

Volume 1 edited by Craig R. Hutchinson, and published by Yutopian (ISBN: 1-889554-42-1) consists of two sections: an exposition on shape followed by 45 early opening problems that focus on positions which arise frequently in games. If one knows a few basic techniques (say 5 kyu AGA), the problems are fairly easy.

. Once again, the question is, how will rescuing or sacrificing the two stones benefit the situation? The key is, how to flexibly atari? 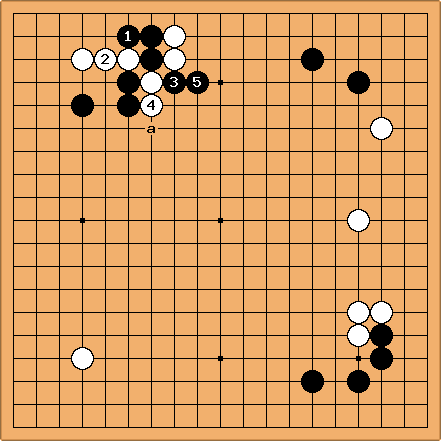 to extend his liberties, before cutting at

. After the sequence to White 6, the ladder at a does not favor Black. Black fails. 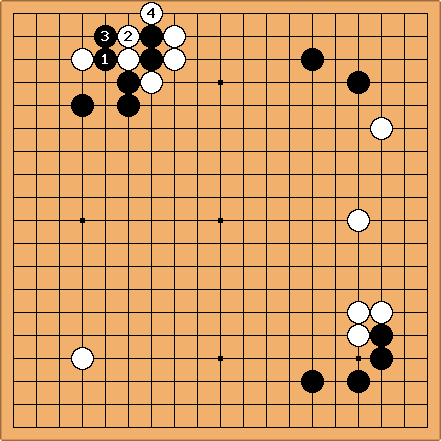 separating White and completely controls the corner after the sequence through

. However, Black does not like how the two black stones are captured. Black can do better though... 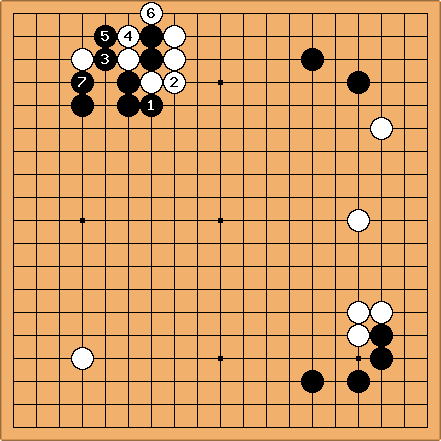 Black should first atari at

, forcing White to connect at

, before the atari at

. White the sequence through

, Black cuts White apart and ends with a better shape. 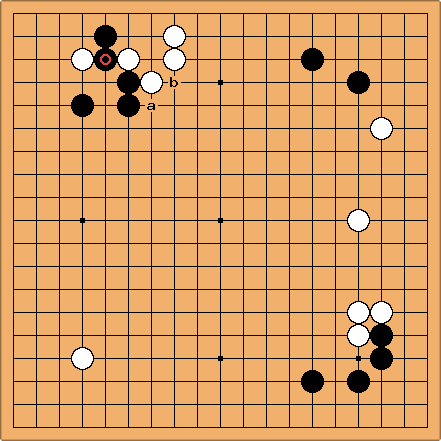 This shows the final position in Diagram 2. Black ataris at

without exchanging Black a for White b. As a result, White has no need to connect at b. Thus, play order is very important in Go. 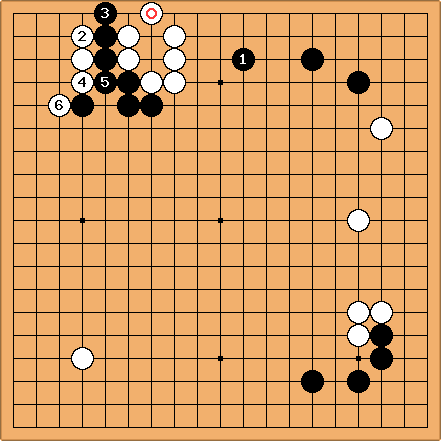 instead of protecting the corner. Using Black's weakness, White secures the corner and Black gets nothing. 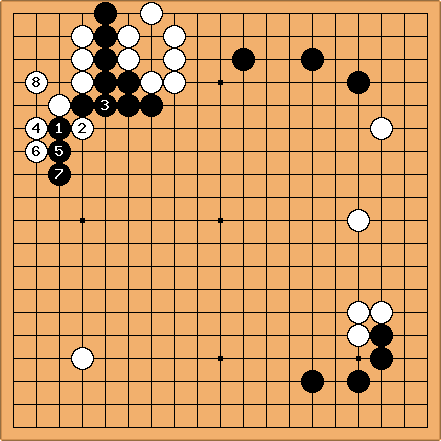 Continuing from the previous diagram, Black hanes at

. However, White's atari at

make life in the corner with the sequence through

. Although Black captures one stone, he is not satisfied.

Volume 2 edited by Paul Henerlau, translated by Catherine Chen and published by Yutopian (ISBN: 1-889554-44-) consists of one section of 54 late opening and early middle game problems. 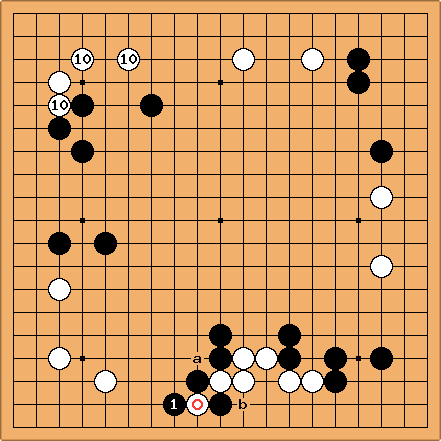 . White now must decide between living on the inside and running to the outside. White can use the forcing moves of a and b to help settle this group. 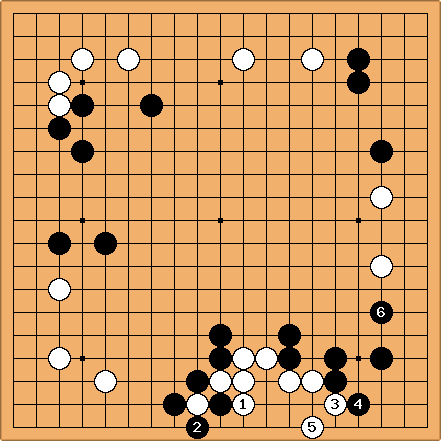 It's bad to be forced to live like this so early in the game. White lives with the moves to

. However, Black captures one stone in sente, then aims to attack the White stones on the right side. This is terrible. 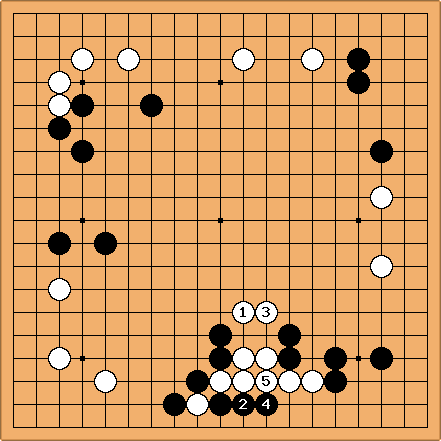 White jumps out to the center with

takes away White's base and eye space at the same time. White is floating in midair. 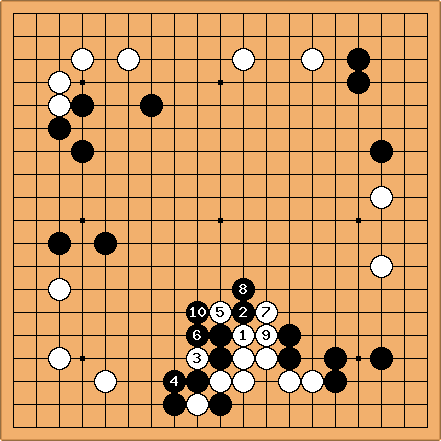 Beginners would be tempted to push out with

and think they are doing well by running out. Black becomes very thick. This is also terrible for White. 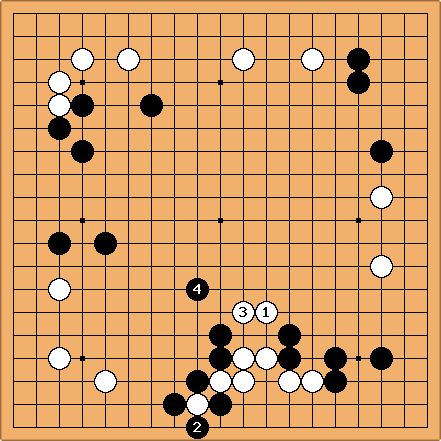 is very calm. White's bamboo joint at 3 protects against the cut. Black continues the relentless attack with 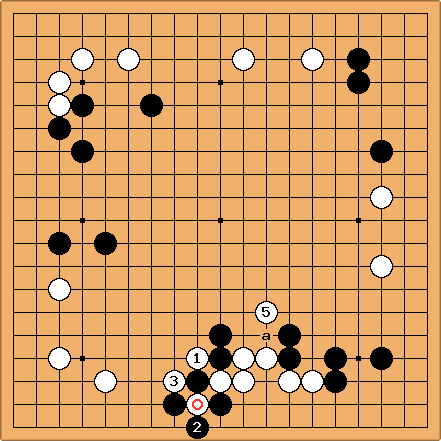 , then jumps out to 5. Black cannot cut at a because of White 1. White is being efficient. 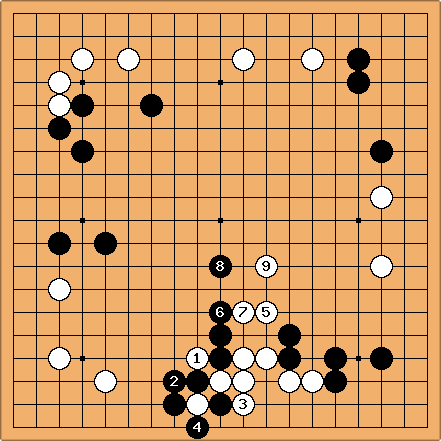 , then White ataris with

in sente. White succeeds in getting out into the open, and gets much needed eye space as well.