This is an English translation of the Chinese commentary provided by 尹航 (Yin Hang) 5p for a game between Pavol Lisy (black) and 李旭. The match was played on 11th October 2015 in the seventh round of the 2015 Qinling Mountains Cup.

Currently commented up to Move 70. Remainder will be added later. 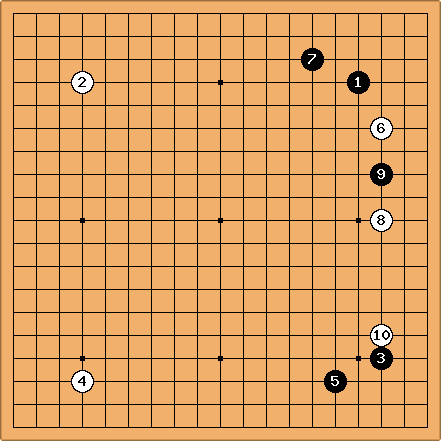 : The invasion is a bit early. Usually black will play on the left side first. 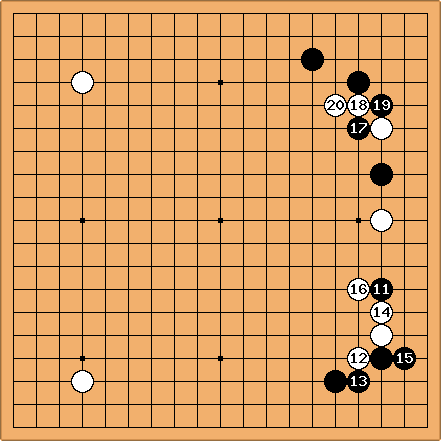 : This move is bad. It should be the attach on top at 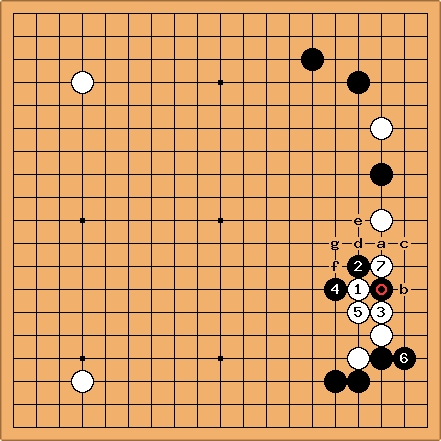 has less aji. Later black can play the sequence a-g to further sacrifice 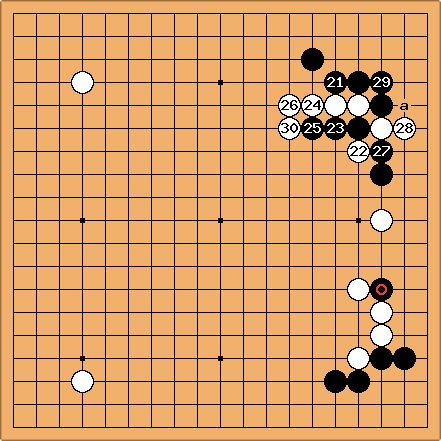 : This combination is black's most severe choice when he does not have the ladder to the lower left.

: A mistake as this variation makes black thick on the right side, increasing the aji of the marked stone. White should atari from underneath at a. See Variation 2.

: Another mistake. White should atari at

and continue with the sequence in Variation 3.1 & 3.2. After variation 3.2, white is much thicker at the top than in the real game up to 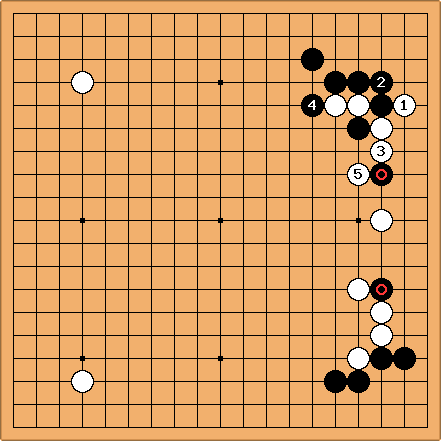 Although the sequence following

is locally good for black, up to

, white can also be satisfied. White has suppressed black's upper marked stone and his strength on the right side has reduced the possibility of black being able to activate his lower marked stone. 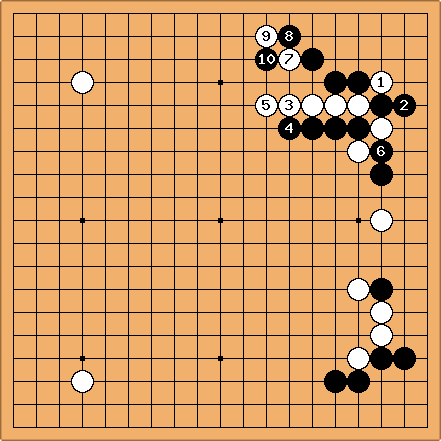 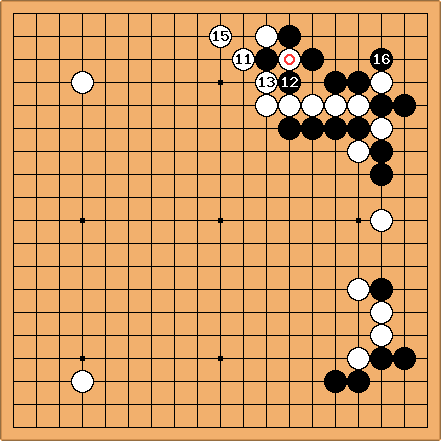 Compared to the real game up to

, white's extra thickness at the top is worth more than black's extra strength on the right. 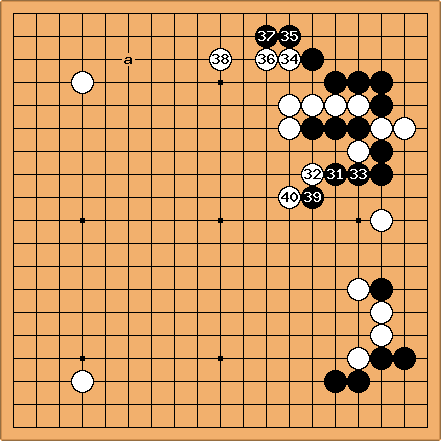 : This is the wrong direction. As black is already very thick here while white's stones are quite thin, adding stones here helps white more than black. Black could instead consider playing at a. See Variations 4.1 and 4.2.

: Also the wrong direction. Black is building from thickness, instead of using it to attack. 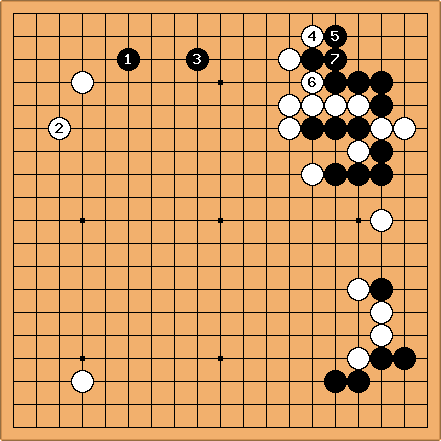 , the weakness of white's stones can be clearly seen.

, then black can play the double approach at 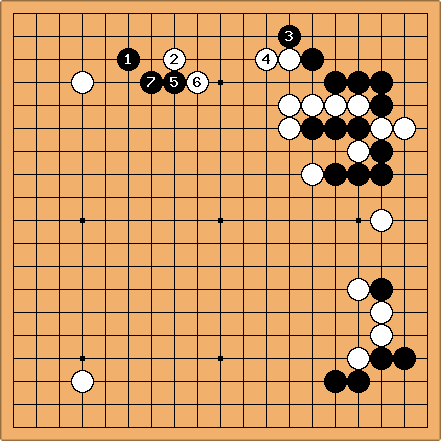 is a nice point. White's shape at the top becomes overconcentrated.

plays tenuki, then black can play 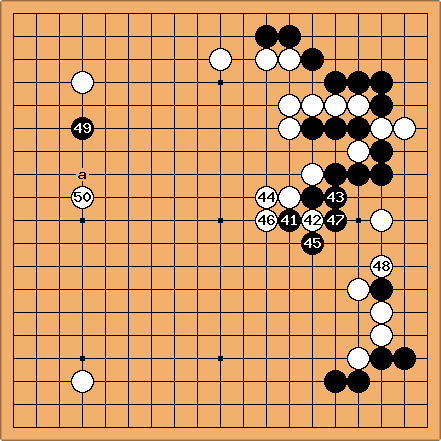 : The high approach is uncommon, but in this game it is okay.

: The tighter pincer at a would be better for fighting. 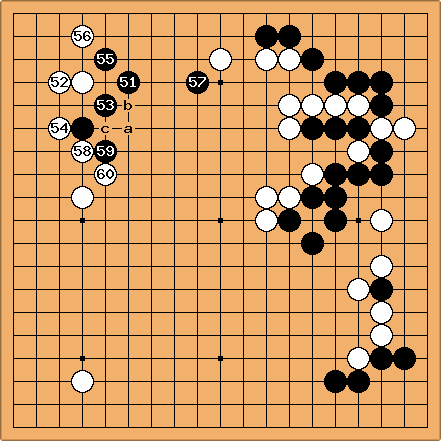 : Keeping the black stones connected is important. Usually a is the shape point, but because white is thick in the upper right, he could cut directly with

: This shoulder hit is a good move for defending black's weak group and shows Lisy's sensitivity when it comes to finding the right shape point. It is hard for white to deal with this move. 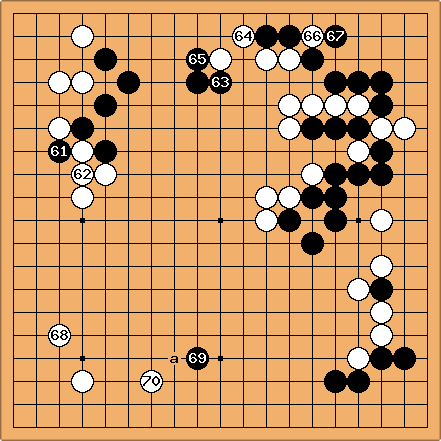 is too slow. Black's group is already difficult to attack, so he should tenuki and play

: This move is too ordinary. Black could consider extending to a as in Variation 6. 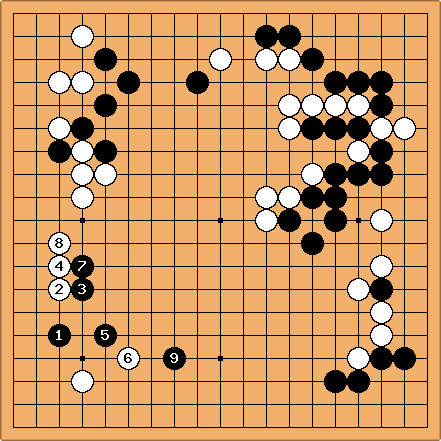 , black can gain a territorial advantage and is easier to play. 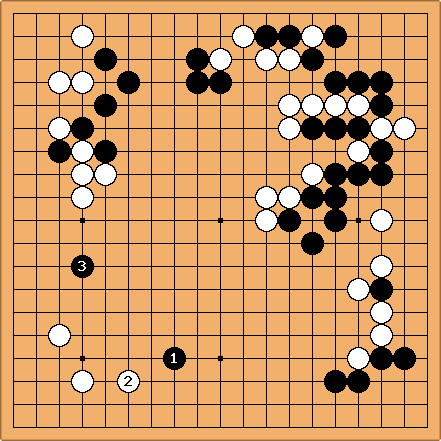 Black should extend to

to restrict white's left side as much as possible. He can then try to take advantage of the slightly unsafe white group in the top right by stealing sente to destroy the left side territory.