This is the touch. The touch stone,

, is adjacent to one enemy stone (

), and three empty points. (The blank spaces can be empty or occupied by stones of either color.)

This common and useful pattern, unlike the tap, is not one that most experienced beginners just pick up. It is not so obvious or easy to understand. It can, in fact, be quite clever.

Like the tap, there are several kinds of play that form the touch pattern.

What does the touch play accomplish?

Like the tap, the touch play takes away one liberty from the enemy stone (along with any stones it is firmly connected to). It may even capture it (or them). If that stone is not yet alive, it weakens it.

Second, the touch exerts influence on the adjacent empty points, as a rule.

exerts any influence, and how much, depends upon the surroundings. Here I shall talk about the typical case.

from it. It may even make it territory, although that is not as likely as with the tap.

typically exerts less influence upon the b points.

If it does not have help, the influence of the touch pattern is fairly weak.

Plays that form the touch pattern

Plays that may form the touch pattern include the following:

The hane and the attachment

Two main plays form the touch pattern, the hane and the attachment.

In the hane, one of the two points adjacent to

is occupied by an enemy stone. The hane is typically an attacking play.

In the attachment, the two points adjacent to the attached stone (

) are either empty or occupied by a friendly stone. (Usually both are empty.)

The attachment is a prime fighting play, although its fighting qualities may not be apparent from the bare diagram above. One reason is its relative weakness. It may have help nearby, but it does not have as strong a connection to a friendly stone as with the tap pattern. It often invites a counterattack.

Such a counterattack is often a play at one of the a points. This very fact may pose a dilemma for White. Which point should she play on? It can be an advantage to make your opponent commit to one alternative or other, and base your response on that choice. The flip side of that dilemma is that you must be prepared for either response. The difficulty level of the attachment is generally higher than that of the hane or of the tap pattern. 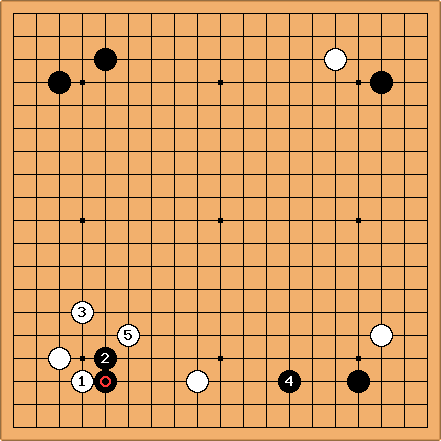 The first three diagrams come from a game between Genjo and Chitoku. 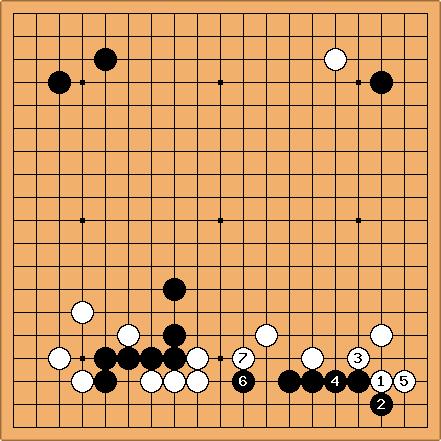 is called a jump attachment, combining a jump with an attachment. It attacks Black while strengthening White.

is a hane. As mentioned above, it is a strong play, and a very frequent response to an attachment.

, forming a V shape, is called a bulge. The bulge is a strong blocking play.

is also a dual purpose move, combining attack and defense.

is another diagonal attachment. Its main purpose is to contain Black's group while connecting White's stones. White is looking to attack Black's stones in the bottom left and strengthens his own stones for that attack. 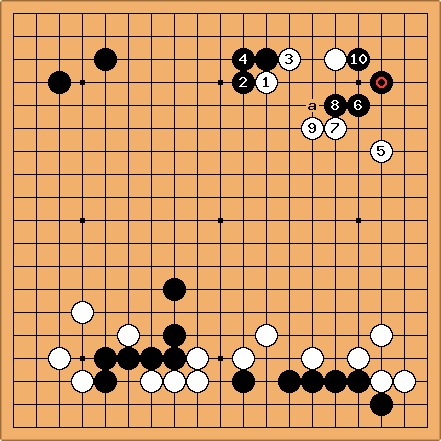 responds with a hane, and

with the pincer at

is a diagonal attachment which secures the corner while attacking White's group. Next, the turn, Wa, protects the group by connecting it to White's strong center stones.

The remaining examples come from a game between Karigane and Go Seigen. They show off Karigane's fighting skill. 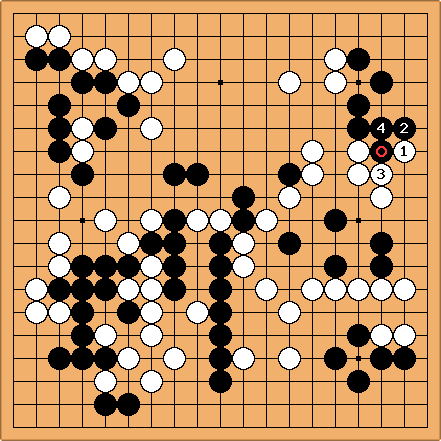 is called a clamp, attacking the

stone and its associated group. The hane,

, defends it while attacking 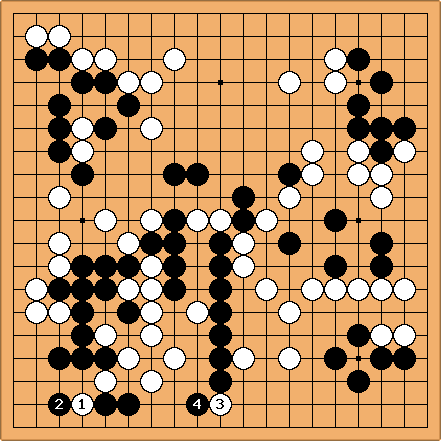 In the fighting up till now, Black has given up the Black group on the right side in exchange for the White group in the bottom left. With great skill, Karigane keeps the game close.

, threatens to save the White group by attacking Black's stones. The clamp,

, is a strong counter.

, may be a surprising move, as it can hardly have much effect upon the strong Black group. However, it threatens to connect to the White group and save it.

might be called a hane, but it's main aim is as a blocking move, and it is called a block. 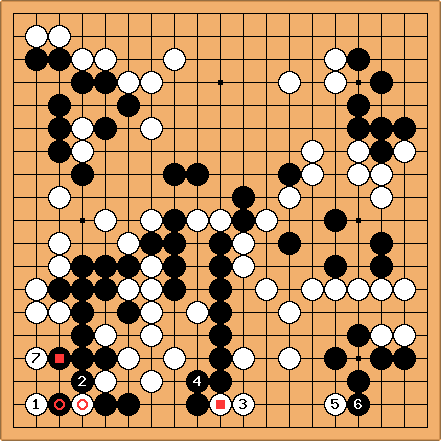 is a strong clamp against the

saves that stone and captures the

stone, which was played as a hane a few moves earlier. Part of the effectiveness of the touch pattern lies in the possibility of sacrificing the touch stone when it has done its work. It is only one stone, after all.

establish a base for White on the bottom side. This is the other horn of the dilemma the attachment,

, posed. Either let White's left hand group live, or let White make something to the right.

to the White stones on the left side. Because of the shape formed by

is called a nose attachment. 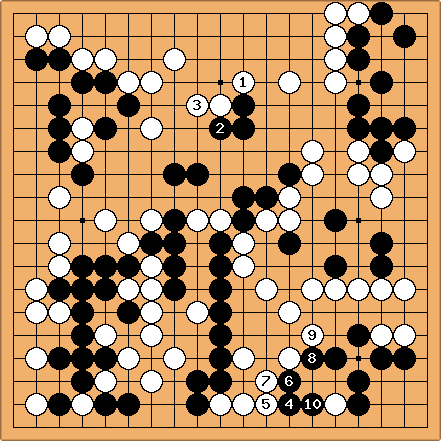 is a block, keeping Black from waltzing into the top side.

is also a block.

The touch is a very useful pattern. However, its utility depends upon tactical ability, particularly for attachments. If you have seen examples of the tap pattern from high level play, you may be able, even as a rank beginner, to find those plays over the board, or at least, to appreciate their power when they are pointed out. That may not be the case with high level examples of the touch pattern. Even after you see them you may still be scratching your head, because of the tactical skill required to understand them.

Some people may criticize me for showing you material so far beyond your ken, but I wanted to inspire you by the depth and beauty of go, and to show you some of the possibilities inherent in the simplest looking plays.

What about the touch pattern in your own play? According to one school of thought, you should stick to plays that you understand and tactics that you can read out. Learn to walk before you try to run. There is obviously something to that. If you follow that advice, you will not make too many attachments for a while.

I have a different attitude. One of the nice things about being a beginner is that there is no embarrassment for making blunders. You are going to make a lot of them. Why not have fun while you are doing so? Why restrict yourself in the type of blunder you make? If you think an attachment might be good, why not go for it? The worst that can happen is a catastrophe. ;-) But you can learn from that. You can't learn from your mistakes if you do not make them in the first place. And if you play safe and sound, you may not even realize when you have made a mistake. Bold blunders are more obvious.

Skillful tactical plays in go are called tesuji. A hefty percentage of tesuji form the touch pattern. A survey of Segoe and Go Seigen's Tesuji Dictionary shows that the touch pattern is key in over 40% of the problems. To learn more about the touch pattern, study tesuji. Doing so will increase your general level of tactical skill, besides. Another good way to study the touch pattern is to play over professional games. You may not yet understand the plays at a tactical level, but you will get a feel for when they are made, and what they can accomplish.

See also the tap and the step.

ilan: This is also one of the basic tactics in 9x9 Go.