This page discusses the solution for Beginner Move Function Problem 1.

Sebastian: I like it! Is the solution the following?

(with a being the most urgent)

Now my question is: Which move did W actually do? 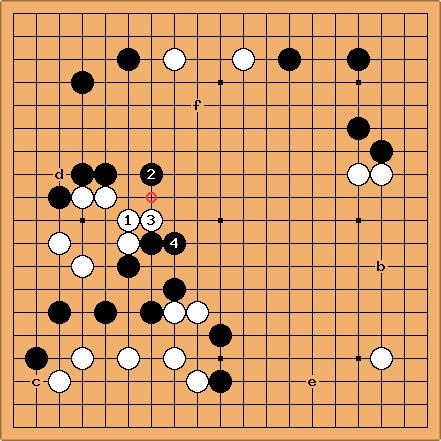 SnotNose: a seems the best to me but it does feel heavy. What might the continuation be? Suppose black continues to threaten the left-side white group while building power to then attack the one at the top, as in the following diagram?

Sebastian: OK, here's another beginner's question: If a is the most urgent move, is it also the biggest move?

SnotNose: While the proverb "urgent points before big ones" seems to imply that something urgent isn't big, that's not the case. What it means is that if you ignore that urgent move (to take that seemingly bigger one) something bad will happen to you and it will, in the end, be bigger than your move.

So, if the answer is a, that must mean it is biggest and urgent, rather than just plain old big. In this case, if white loses her left-side group, she loses leverage on black's eyeless left-bottom group. Or, even if white lives, but gets enclosed, her group becomes cut off and can't play an active part in the rest of the game, which is a big loss but hard to calculate.

Alex Weldon: The answer given above is correct. This is, after all, a problem for total beginners. Thinking about it, though, I realize that there's potential for this sort of problem to go all the way up to advanced level (though not as a multiple choice like this, obviously), since there are still moves in pro games that I have to think about a while to figure out what the point is. As to what I played in the actual game... I can't remember, and now I can't figure out which of my games I took this from. I'm guessing a, since I was weaker at the time, but that isn't the move I'd play now, because yes, it is a bit heavy, as was mentioned. I'd probably play the marked point instead... but I figured a was a bit easier for a beginner to understand.

Anyway, glad to hear that people like the idea. I'll be adding more, hopefully more difficult (although still beginner) move function problems soon. Others can feel free to add their own, of course, and toy with and modify the idea as much as they want.

Jesse: I like your problem as well. However I think that f may not be the best choice for a "vague, lax move of little use at the moment." The reason for this is that the white group is stuck between two relatively strong black positions, and it may be a good idea to strengthen it (though a is certainly more urgent, and I would prefer a one space jump to the center).

Here is an illustrative example: 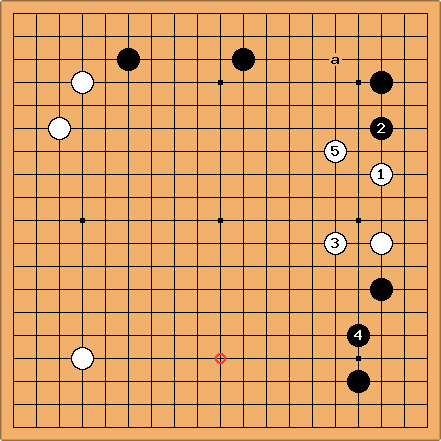 threatens an invasion. But I do find it interesting that white chooses

in preference to the obvious big point at the bottom.

Alex Weldon: I stand by the notion that f is vague and lax, though. It does strengthen the group a bit, but doesn't make it completely secure and neither is it necessary at the moment. In contrast,

above is good because its purpose is more to threaten the invasion while strengthening the group a bit - this makes it sente, as we see by Black's response. Strengthening a weakish group in sente must surely be good, whereas strenghtening it in gote is bad, unless absolutely necessary.

is a dual-purpose move. It further supports the White group on the middle of the right side and prepares/threatens an invasion of the top right at a

Jesse: I agree with your assessment Alex. I just think that a completely negative annotation with no reasoning provided may not be most instructive for beginners, especially when a beginner might choose the move for reasons that shouldn't be completely unlearned. I hope that makes sense :-)

Sebastian: Jesse has a point. Identifying #6 was the hardest for me, because the statement sounds so completely negative. This was perfect for my level, but I would object to calling this "a problem for total beginners". Maybe we should discuss this in Page Difficulty Discussion.