lavalyn 17k again - maybe I should stop submitting these spoilers.

Dieter: only when you stop feeling a beginner. Feel free !'' 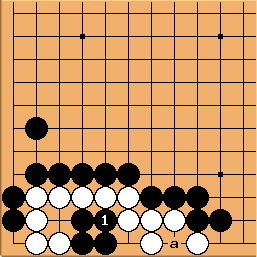 a is a false eye. To live, White must make seki in the larger space that contains three black stones.

hits the vital point of the position. ( 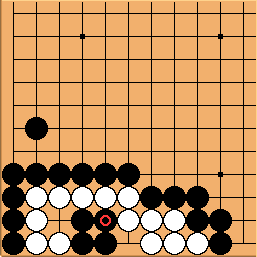 We'll fill up some liberties - then...

BonhommedeNeige: I'm only a beginner, but I've thought long about this, and I don't understand how between the first diagram and the one above, Black has placed 3 stones and White has placed only one.

Bill: If White is alive, allowing Black to fill in those liberties does not matter. (Unless White must capture the Black stones inside. However, that would leave White with a dead shape.)

BonhommedeNeige: Also, after Black takes the vital point, would it not make more sense for white to move to K1, forcing black to block as shown: 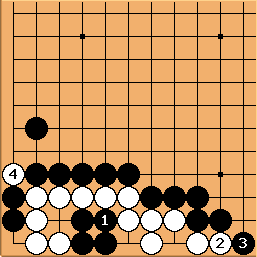 and can kill the group of 2 at lower left to create more eyespace, then try to kill square group of 4 it encloses. 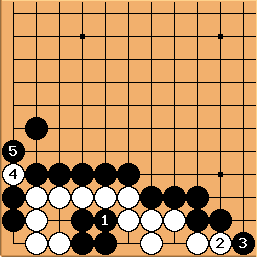 , saving the two Black stones. (Although that is not really necessary, as you may work out if you wish.) White cannot escape.

Also, it does White no good to capture the four Black stones. See below. 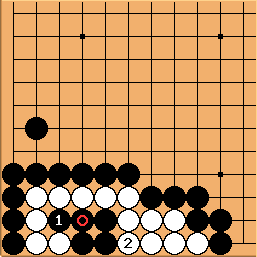 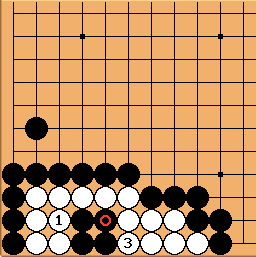 Even if Black doesn't play again in this area ( 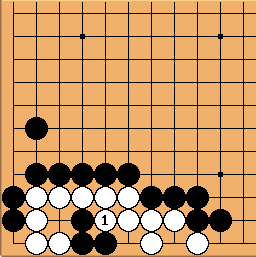 If White takes the vital point, she forms a seki. An attempt by Black to kill the group instead yields either a bent four or a twisted four both of which are live shapes. These are shown in the failure diagrams below. 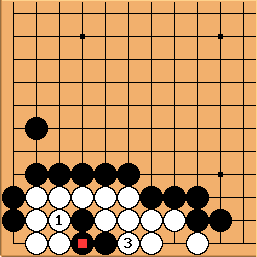 , then White is left with a bent three; Black can now kill White by playing back at 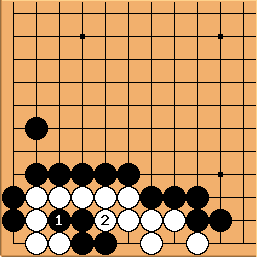 occupies the vital point, and White lives in the shape of twisted four. 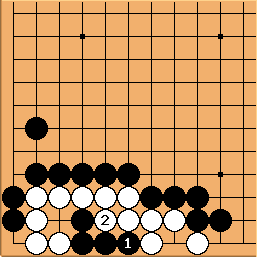 in this diagram doesn't help either. Again,

occupies the vital point, and White lives in the shape of bent four.

Tas: Would the four black stones in the middle of the second diagram be counted dead? They'll have to go before white can be killed.

Tirian: I don't believe so. But moreover, I don't think it matters. If White were to take the four prisoners, it would just mean four extra points of territory for Black.

Pilgrim In the first diagram wouldn't it be necessary to enter a ko situation in order to remove the false eye, which would be a solution for white according to the conventions in life and death?

Karl Knechtel: You are confused. ko is a failure for an unconditional kill (and also for unconditional life) only if it is relevant to the status of the group. Here, any number of isolated, simple kos on the outside of the group cannot help White, unless the outside Black stones are endangered in some way.

The reason is simple: suppose White "wins" the ko. She cannot resolve it by capturing anything, since there is nothing to capture; and resolving it by filling the ko is counter-productive. So White can only pass or play elsewhere, and has no way to stop Black from taking the ko. Eventually Black wins, and can fill the ko and continue capturing.

Of course, we don't have to do this: because White has no effective resistance to being captured, she is simply dead.

Consider these simpler examples with the above reasoning if you are still confused: 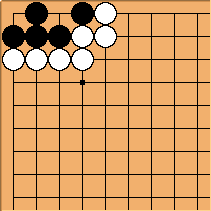 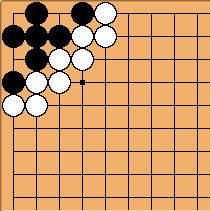 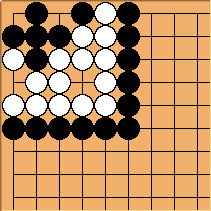