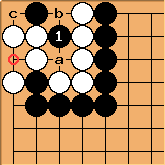 KarlKnechtel: Black can later play b at his leisure (except if forced to, by White at a or c). White cannot play at b because of shortage of liberties. Once Black plays at b, White is almost filled with three connected stones - a dead shape. The false eye at the circled point is irrelevant as far as I can tell.

Robinz: Hi, excuse the dumb question, I'm only a beginner - but are you saying that this sequence kills white? It looks like seki to me - after black fills at b, white must connect at a (if he didn't already) to save his stones, but can't then capture the black stones by playing at c without leaving himself with a dead shape. But black can't play at c either, as that would be suicide. So I think white and black both live - unless I'm being (predictably) dumb on my first edit. (But either way, I think this explanation needs some further clarification.)

[5 minutes later: sorry, I see it now - white dies because black can fill up the liberty at the bottom-left, followed by the circled point, and then black c isn't suicide, as it captures white. I'll leave my question up in case any other similarly confused people as me come up with the same question :)]