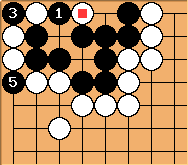 Bill: Black can live by capturing

, but that should be a last resort. This is properly a two stage ko. Black should normally play to win it with

Brent: Bill, why/when is the two stage ko better? I see that winning it is certainly worth about... um... eight more points than living immediately after winning the first stage. But it seems like by chooosing to fight the second stage after winning the first, Black puts himself in danger of losing the first again anyway. But I suppose it depends on the rest of the board...? I guess partly I'm not even sure what my question is, and maybe the answer is too complicated anyway. (=

Bill: Suppose that Black takes the second leg of the ko (

, Black has lived with sente. If White makes a ko threat and Black replies, now when White takes back, if Black is desperate he can take

and live. So Black should almost always take the second leg in preference to taking

Also winning the two stage ko is closer to fifteen points better, because Black can intrude into White's territory on the left side. That's important. 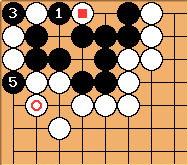 is normally too small to play this as a two stage ko.

Brent: Thanks for the explanation! That makes a lot more sense. The one thing I'm still not clear on is how Black intrudes on White's teritory more than a couple points: 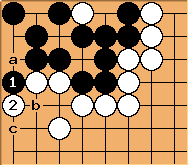 . Then what? The sequence I had in mind when I counted eight points was Black a - White b. Can Black do better? Shaydwyrm: For black to play

, he must have ignored some ko threat. If white plays

, followed by black a - white b, then black can respond to the ko threat and white has lost his two stones, plus 2 points of territory with no compensation. On the other hand, if white locally ignores

to follow up on his ko threat, black can intrude on white's territory further. I think this is what Bill is talking about.

Bill: And even if White had not played a ko threat, if White responds with

, Black has won the ko with sente. That's an admission by White that Black should play the two stage ko. ;-)

If White does not play

, then Black can jump to c. This problem, like most problems, does not show enough of the board to evaluate such a jump, but I estimate it as about a 7 point sente.

seelenfliege?: what about this solution, instead of making ko: 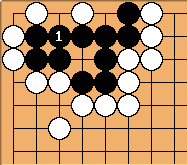 Black makes the eye on the bottom and can surely make another eye on the top, because white is threatened by connect-and-die 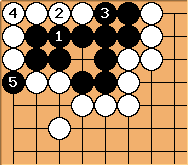 In this case, the best white can do is:

Incorrect, black has shortage of liberties, white 4 would just capture instead 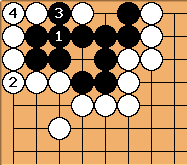 But black lives with a second eye.

Ok, I see it, thanks Dieter! Of course white wouldn't connect with

in the second diagram but just capture the whole group. It took half an hour discussion with a friend to find out. I really have a blind spot in my brain sometimes... 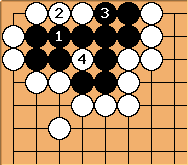