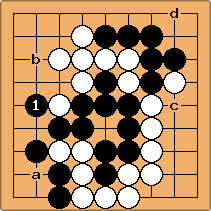 looks like the best move in the circumstances. If

at a, Black can jump out to b and start a semeai which it looks like he would win. I think. Anyway, if

mgoetze: Well, there are a few things to think about when choosing a move for

. First of all, what exactly happens in the semeai that ensues if White plays a directly? Secondly, what is the status of the black group in the upper right? Third, how big is a move at or near c (especially compared with a move at a)?

BTW, in the game from which I took this position,

was played at a, and I suppose you can guess what I played then. ;)

HolIgor: No, you must be kidding.

ChrisSchack:The group in the upper right is alive, but anything that protects the cut at c is sente against it, requiring a response at d ... actually, I'm not sure about that last, it may depend on the semeai discussed in the upper left. If B could capture first there...

TalionThe answer to 1 would be to resign. White's upper left group is dead as it stands after black 1. white has lost the game, his best chance is probably to try and defend still while he hopes for black to make a mistake, a slim chance. Oh and since 1 won the game it is obviously the best move for black ;) 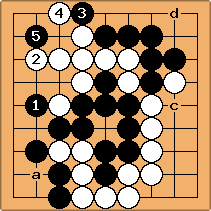 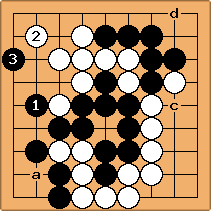 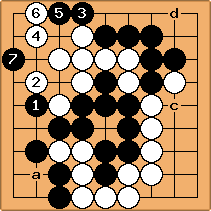 Bill: What if White fights the ko? 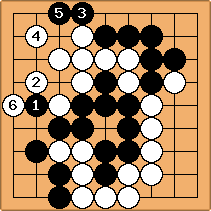 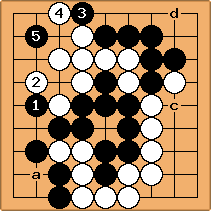