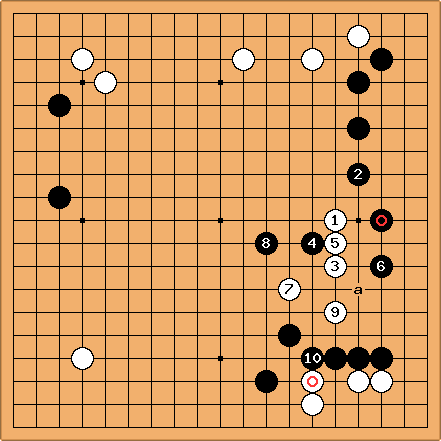 is the first move I am really unhappy with. A move at a might cover the weakness indirectly while making points.

is not ideally placed - did the approach

occur after the joseki at top right? How did this position arise? 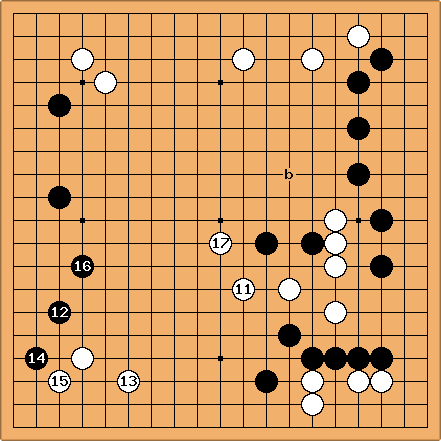 I am not sure about

, but I was looking for a way to profit from the weak white group.

feels right, but I don't quite know what to do with these stones afterwards. Just let them sit there and annoy White? Try to pull them out around b? Actively sacrifice them?

feels really heavy to me. If the

exchange wasn't on the board would you ever play there? But if

is a kikashi you shouldn't be bothering to save it. Also

and on don't have any impact on the white center group. So how is that profiting from it?

as an answer to

tapir: In my little world

is just a standard idea to put pressure on the white group.

, then leaving it be does not seem like a good strategy. Basically, you are exchanging this move for

. I think the white stones are not as weak as you make them out to be, and as such, you should not be attacking them too hard. Just let them lay on the board for the time being, and maybe if another weakness appears in the white position you can do something with (against) them.

certainly are not the way - those stones are not really influencing the white ones. Which does not mean that they are bad moves, but this is not the way to do something with the white stones - but then again, I think that that is just an issue of patience. 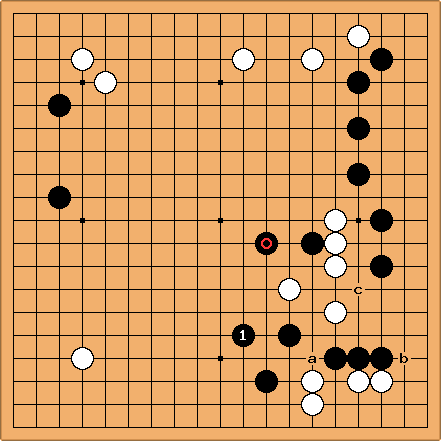 Dieter: I think Black should reinforce here, with multiple purposes. White can cut in gote at a and then Black can descend at b. It is hard for White to separate that string now, because the corner is weak and there is another weakness at c. On the other hand, I agree that

is a better move in itself than

in the first diagram could be here as well, being multi-purpose.