Is the presence of

in a diagonal fuseki as a ladder breaker going to cause white difficulty in her selection of the taisha joseki in the upper right?

It's hard to give a quick answer. I am no authority, but I think it would be interesting to discuss an example. Feel free to move this thread. Ladders may be considerations in tasuki fuseki, but the taisha is a bit of a digression. -Calvin 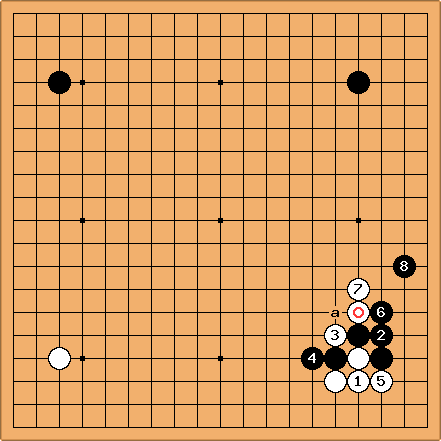 Calvin: There are actually many examples of pro games where the the double approach is made regardless of the situation in the opposite corner, so it would appear that black has no clear refutation. (Remember than the double approach doesn't mean the taisha is played). Ishida seems to have done okay playing this

agains Rin Kaiho, because white won this game. According to Kogo's Joseki Dictionary, white should really have ladders to play this line, but which ladders? It says black can play a now to simplify the position. (Rin Kaiho played 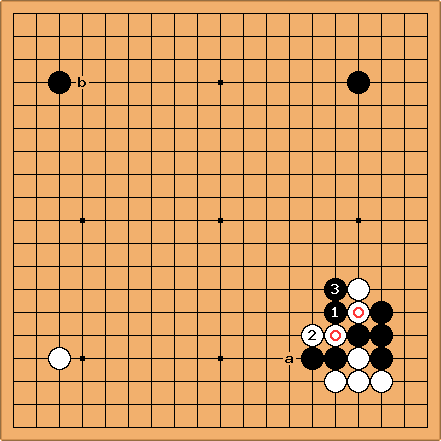 , black is threatening to capture both of the marked white groups. Since the ladder works, white can't defend both sides, so he has to capture at a or play a ladder breaker at say, b. 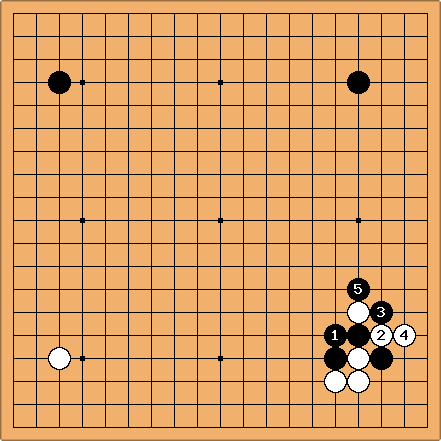 Calvin: Here is another variation, where Kogo's says black needs a ladder to connect on the outside at