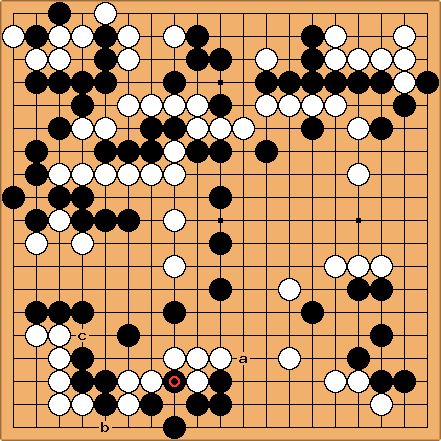 Dieter: It is really very hard for me to make a sound decision in a ko situation. The ko under investigation evolves about the marked black stone. First a little positional judgment: White has about 20 points in the UL, and about 10 in the other two corners. Black has 20 points on the left side, about 10 on the upper side and a couple of points in the LR. The bottom however, is completely thrown into confusion. The confusion favours White (giving 3 stones of handicap, but that's a game issue) so it seems. The ko is locally affected by the cutting and connecting possibilities at a, b and c. The White stones at the lower right at the lower left are not extremely stable.

White to move. Black has just captured the ko. How to settle events in White's favour ? 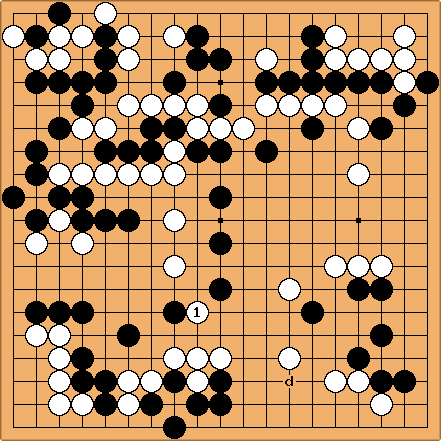 Charles Matthews In this situation I would play White 1 here, without much hesitation. It seems to be a valid ko threat, at least. It perhaps is more than that. Can Black now avoid a large-scale attack on the central stones? It should be good for White anyway; but if she wins the ko the lower right may become white territory (though there is some weakness around d, I think).

I don't find this an easy position to read, but the local sequence started by White 1 appears to be interesting. 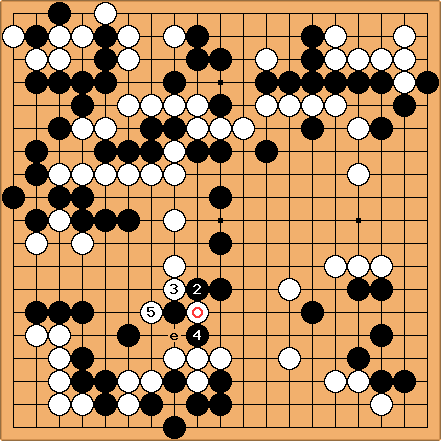 At this point either of 5 or e might be good for White to cut without giving Black an eye. So White can play some combination of moves in the centre, and captures in the ko.