Attacking invasion of extension from shimari. I was surprised to not find the position in the top left corner on SL. I assumed that meant white's play at 1 was flawed, but it wasn't immediately obvious to me what the best response would be. I ultimately decided to cap with 2 as "capping is never wrong" but I'm far from sure that it is right in this case. I am currently 12k per AGA. Thank you. 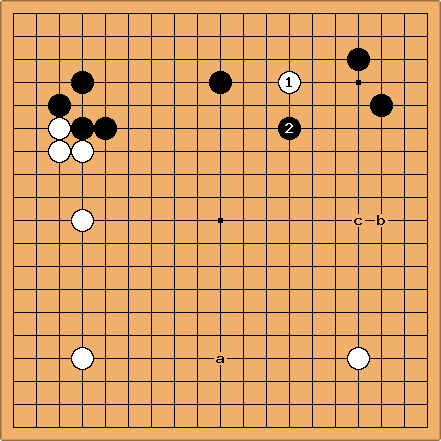 looks good to me.

is going to struggle mightily and black will get good profit, probably on both the top and right. I think it was too early to play

. Maybe something like a would have been calm development for white?

Andre Engels: Going in at

is definitely too early. a would definitely be a good idea, as would be somewhere around b. However, the cap with

might be too early as well. Black would do better to play something like c, putting light pressure on the stone while making a normal development. After

white can play around c as well. Black will not be able to capture this stone in one move, definitely not without an awful lot of aji, so white can still consider it a light stone. 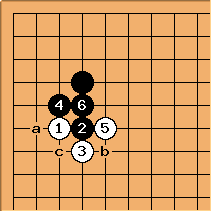