First we will examine the original Joseki for consideration in terms of board position and move control. 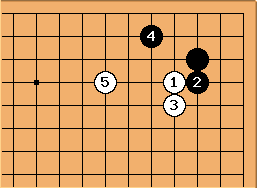 the conditions are as such: 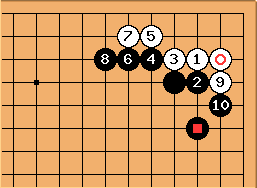 This represents one possible Joseki for the 3-3 invasion behind the 4-4 point. Move 11 is

the conditions are as such:

Now the question comes into play: is an immediate tenuki okay?

Let's try these Joseki again, but with tenuki. 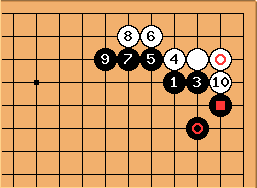 elsewhere the conditions are as such:

Notice that these are the same conditions as the White 3-3 invasion behind Black 4-4. 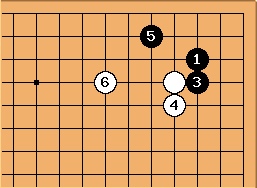 The question then is one of large implication. It is simultaneously all of these questions:

Further, there are other questions to ask if it turns out 3-3 and 4-4 are neither better nor worse than each other (i.e. answers above are are no, yes, at times, no):

If it is determined that it is tactically null or advantageous to select the inversion over the approach at a particular time (if "always," then ALWAYS is that time), then either approach is gote and the tenuki is the superior joseki because it gives one free move. If so, then one more consideration on the board is to make sure that you both account for your lonely corner stone at 4-4 being your opponent at 3-3 with you about to attack AND consider it as it lay until you play a shimari or get approached at that corner.

Andy: The 3-3 invasion under a 4-4 stone is not joseki. The thickness the 4-4 player gets is more valuable than the territory the invader gets. The invasion only becomes playable when external circumstances are such that the thickness is devalued. In contrast, the 4-4 approach to a 3-3 stone on an empty board IS joseki so the positions aren't really as invertible as they might appear at first glance.

tapir: I agree. But there is a more general point: The evenness of a joseki is related to the total number of stones played. There are joseki where one side has two stones more and the joseki results in a miserable enclosed life in the corner or some stones on the outside with a single whopping eye (+ some space to run to). They still are joseki. In the most common 3-3 invasion joseki the inside player has a stone less in the end, while with the shoulderhit both sides spend the same amount of stones. So, while the stones may be even in effectiveness the local score should be different according to the number of moves spent. Also, there are more possible joseki in either case than only one.

hyperpapeterie: These comments seem to be based on the idea that joseki must be intrinsically equal. That is false. See 34PointDistantLowApproachKosumi for one joseki that is not intrinsically equal (I got the example from Mingjiu Jiang via Shygost). Of course you should not play joseki when they result in a bad result for you. But sometimes the best play leaves you with a locally inferior result--the alternatives are worse. If that best play is a common and settled sequence, it is often called joseki.

Is there any evidence that professionals say the 33 invasion is not joseki?

tapir: I guess there are two related misconceptions at work here, both resulting from a misunderstanding of the "evenness" of joseki. One is that if any evenness is to reckon with it is the efficiency of the stones (they are all a similarly efficient) - that is where one side spends more stones it will have more territory/influence in the end, exactly because it is joseki. So, yes tenuki joseki are joseki as well - but they are joseki exactly because the local move gains about as much as the tenuki. The second point is that probably instead of evenness the explanation of joseki should be sth. like: best play of both sides under specific circumstances (and achieving certain aims). If you play a joseki it under wrong circumstances (as achieving most outside influence were it is already negated by opponents stones) the loss is usually bigger than somebody playing a slightly inferior sequence in right direction of play. Later: Basically I just wanted to link to JosekiChoice :)