Tapir: This is from an ongoing game (but much progressed now, so it doesn't harm to comment on the opening) on OGS. I am White and am completely spooked by Blacks Tengen opening. I try to stay calm, but I lack balance.

fractic: In my (1k) opinion I don't think White's position is that bad after

. The bottom framework feels to wide for me and the tengen stone isn't doing a lot of work.

tapir: I read recently: "The basis for a moyo's effectiveness is its scale; solidity is a problem of secondary importance." Thinking about this I very much like Black after

fractic: That's an interesting way of looking at it. However I don't really feel that Black's framework is that big in scale after

. It's just the lower left quadrant. It doesn't even span a whole side of the board. 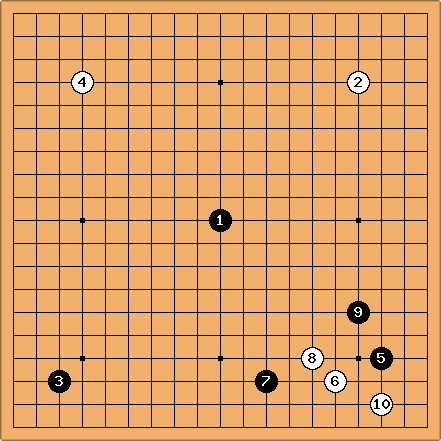 is fine. Playing the press leads to a fight in which the black tengen stone will work great. 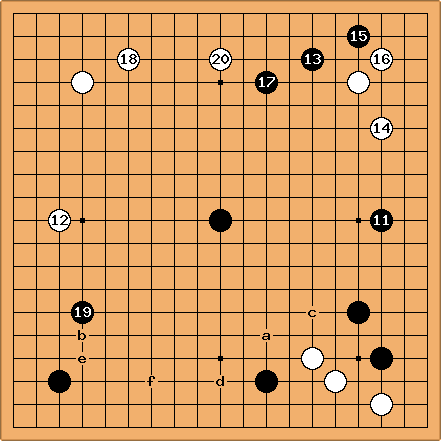 fractic: Mabye you could have played

or b before playing at

is a big point so can't be that bad.

However I'm not a big fan of

. Sure it's an attack but with tengen and

nearby it's not very strong. Also it's an extension from a low stone. I would prefer to play at c instead. It's a good point after this joseki for both sides. It has follow ups on the right and puts limits on the bottom framework. I honestly think that with

Dieter: I agree that

may be big but not big enough right now. However, I disagree that it should be at c because of the tengen stone. If you try hard negating the use of the tengen stone, it will have fulfilled that very purpose. c may neutralize tengen, but it has a strong dame flavour. Instead I would enter Black's sphere of influence at d.

If you want to prevent the moyo and negate tengen at the same time, which is a more efficient plan, then

can be played at e, a move which often exposes the lack of cooperation between tengen and san-san.

fractic: White c is not purely a move aimed at reducing tengen. It's locally a good point. Aiming at invasions to the right and left while also preventing Black from sealing white in with a or with the keima one point to the right. I feel like invading at d just encourages Black to play this jump or keima after which white has two groups to worry about in the midst of Black's sphere of influence.

I agree c would make miai of a move at the right or at the bottom. With

in place, I don't think c does a lot. Black can easily choose to answer at the bottom and White will have a hard time proving the meaning of c. I can agree more with your assessment of d. Maybe White should have gone at e already with move

tapir: Maybe my reasoning is wrong, but I feel like the shoulder hit forces Black to take territory while any White influence is already limited by the tengen. That is what I mean by spooked here... because the tengen makes me very insecure regarding my choices. I try to play calm but every outside move feels already inefficient and every territorial move feels like inviting Black to play with better coordination on the whole board.

Dieter: In my opinion tengen needs to be coordinated with some influence. Using tewari, it's hard for me to imagine Black playing tengen after the joseki(s) resulting from a capping 4-4 against a 3-3.

Uberdude It's hard for me to say black is better at 21. However, peeking at OGS I think what you then did on the lower side was definitely bad. I would start at d3 to build a group on the lower side. Losing f3 and hurting c10 was too bad.

Andy Pierce: d is certainly jumping into the teeth of the storm with tengen staring down at you. How about instead of

a play at f with the idea that w either gets a base at d or can attach to the 33 stone in the lower left with good sabaki possibilities?

Dieter: f crossed my mind as well and it is better than d. However, the attachment is already an emergency measure, so that I went looking for an earlier opportunity to turn the flow into White's favour.