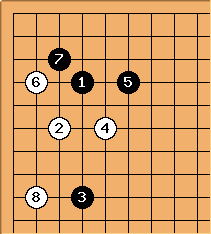 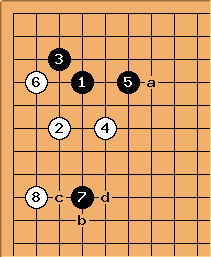 sequence is supposedly an old joseki (see 4-4 3-3 enclosure), with the next moves being

at b. Here, I would argue that

is already played. So,

tries to punish the "mistake" since the White group isn't settled yet, and White has to end up making a base in gote with

is a bit conservative relative to the old joseki, and playing

one line below at c can be considered. (Then again, one could argue that Black is trying to stay light with the attacking move, as playing

Uberdude: Trying to show the Catenaccio joseki is poor by tewari analysis comparison with another old joseki (the 3-3 answer to the approach) that is usually considered bad as the fair result reference frame is illogical. Indeed I think this whole exercise is likely to be fruitless and would be surprised if anyone finds an answer that is not logically flawed and contains silly moves as the "normal" moves for tewari. One should just observe white 8 is on the 2nd line which is low so black 3 for white 8 is a slightly good exchange for black in the opening. As Charles says on Catenaccio Joseki this joseki is neither extinct nor superseded. It is still played occasionally these days when white wants to settle quickly in that area and prevent black getting a strong outside due to global considerations: the more common and locally better result from a territory point of view is to take the corner, often by first making a double kakari, but then black gets a wall facing his pincer stone which may have lots of potential in the side/centre.

emeraldemon: Is this meant to be a puzzle? 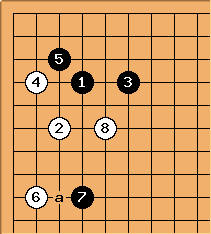 This is somewhat similar to MrTenuki's variation, moves 1-5 are joseki,

is one point too low, usually at a. But then

looks a little strange, and

from the main group.

is probably a bad move, but is

MrTenuki: That was actually the first idea that came to my mind. However, the

exchange doesn't look convincingly favorable to Black to me (otherwise I wouldn't have looked for the old "joseki"). 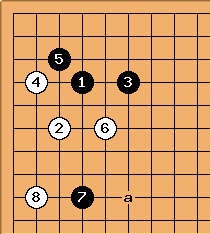 tapir: It is in a way a puzzle. But I don't know the solution either. I just try to strengthen my positional judgement in general that is why i keep adding tewari examples every now and then as opposed to just take for granted expertise given.

deviates. (But there may be reasons sometime if white is particularly strong in lower left.)

seems like a reasonable pincer/invasion... but especially in cases where

is reasonable, would not White want to play

at a or an counterpincer?

FredK: Whatever the order of moves, see the diagrams labeled "Hidden defect" in the book review Ishikura-Style Sure-Fire Victory at Go -- The Twelve Things to Know for a terrible thing B can do to W in this shape (unless a ton of W stones are waiting, out of sight, below the displayed portion).

tapir: I feel in matters of tewari I made a good guess above. The hidden defect: I of course tried it instantly. What happened, my opponent answered slightly more clever than in the diagrams (he read 2 stones ahead!), and I ended up playing a bunch of self-hurting moves, while he simply was connecting on the first line later instead of the second one. Which was the expected outcome. The main defect - in real games - probably is that White can't grow anywhere because after the peep and second line attachment by Black all but the slowest developments are cut.