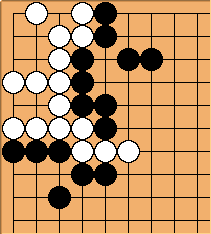 I know this exact shape is unusual, I just made it to ask the question. I know the best way to fight it, is to not let this happen. But once this happens: that the stone sticks out, how to we fight it ?

I also call this the worm. 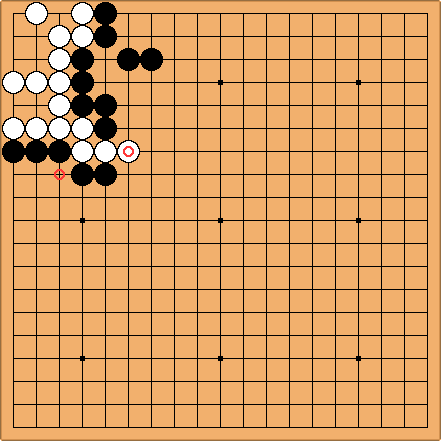 C0nfuseki: Apart from the fact that White can play at circle to give Black more of a hard time, both players need to accept the fact that White has managed to run into the middle. Hopefully, you haven't been trying for a moyo making game. You were really wanting to make sure that your stones were making territory -- and so you should try to play a move that will get you the most territory. If you push those white stones towards your other split group, it is YOU who will suffer. (Don't make moves just to strengthen something weak or pointlessly attack without gaining profit.)

tapir: The white group is undeniably alive - you can't push and force and fight it anymore. Just dodge anything bad coming from that direction. = Play somewhere else. As the left side is weak, try an extension there. The best what can happen now, is that white cut and helps you strengthening your group while capturing three stones. I would not defend the cut directly as the whole left side group may end up under attack and forced to live small.

I suppose I meant this in a different way:

The game territories are already shaped. All throughout the board. Let us say that black has no weaknesses in his shape asides the one spot where White broke through. This is in the middle of the board, black is alive on either side of where white broke in, yet there is a BIG gap of space. THis is the last play, how would black secure back some of that empty space ?

eg: image this: except on 19*19 in larger dimentions, is only solution to sacrifice half ? Thank you :) 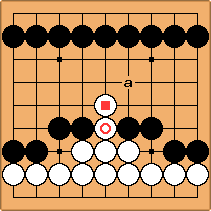 Andy: This is such an awful thing to let happen that black should have taken whatever black's last move was and stopped this from happening in the first place. I think Janice Kim calls this sort of situation "the finger" and I've also seen this called "squeezing out the toothpaste". It is so much better to not screw up like this in the first place, than to try to figure out how to implement some kind of damage control after it's too late.

Uberdude This is indeed an awfully broken shape that you should avoid. Having said that, it doesn't mean we shouldn't answer the question. To make some points you could play 'a' in the diagram above. Of course we cannot answer the original diagram's question without more of the board. It is a very common beginner mistake to squeeze out the toothpaste as they seem unaware how bad it is. It can happen though, for example if the circled white stone was a ko threat, black resolved the ko elsewhere as it was bigger, and then white followed up the threat by poking out at the square stone.

Bass: There is nothing that black can do in this kind of situation. If black has chosen to play like this, then all the available profit for black has already been taken. This profit is of course quite big (otherwise black would not have played like this), so typically the correct action to take is to abandon all hope here, play elsewhere, and win the game by that earlier profit.

Phelan: I think the best way to deal with it after it's happened is to enclose the biggest amount of territory from afar, and limit the damage. If you try to play too close you'll usually have problems dealing with the toothpaste's strength(odd turn of phrase :p). 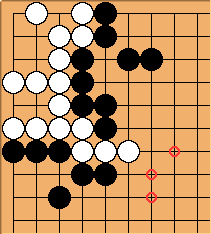 Bill: I have added a stone to indicate that the Black stones are secure, as well. If that is not your intention, please correct me. As for fighting the White group, the general idea is this: Don't. White is alive.

There is a proverb, Do not approach strong stones, that applies. Besides, assuming that all of the stones in the diagram are secure, this area is relatively small.

At some point, it will be worth Black's while to play here, and the circled points are often good. Note that they are not touching the White stones, but are a little distance away.

To return to your original question, when stones are this strong, do not fight them. :)

Semper: Hello, I was the one who asked the question.

Here is my work so far on containning the worm: (this is in the case that there is a dip in the formation, you'll notice on these diagrams the spot where white breaks through, black is not flat). I still need to test with black flat, but this IS a start :) If something I did is not the best move in that situation, well then please say it. I tried doing multiple possibilities so you could see it.

xela: In your second diagram, did you mean to number a few more moves? In most of the diagrams you haven't shown the best moves for either player. Black should play at a distance from white's "worm", and white usually does best to just keep pushing straight ahead. But these positions are very artificial; it's great that you're putting in so much effort on this, but I'm not sure that it will help you become a better player. Can you show us a real game in which this happened? In particular, show the moves leading up to this situation.

Semper: I would, except the last time this happened to me was about a year ago :) I don't have a game records and cannot make one since the internet I am using blocks telnet at the momment so I cannot play against other people (public internet). Some I know wouldn't be the best move. It is hard know what is the best move when figuring it out alone :) I just look for weakness and play against that. There is a question towars the latest diagrams though, about what to do next. 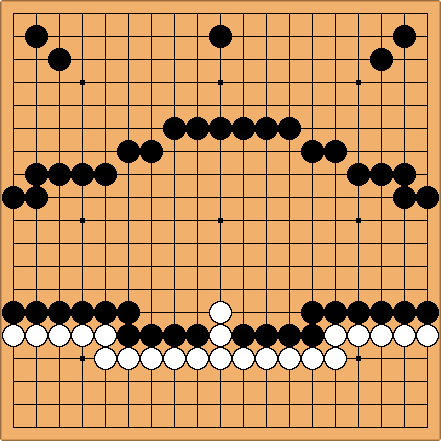 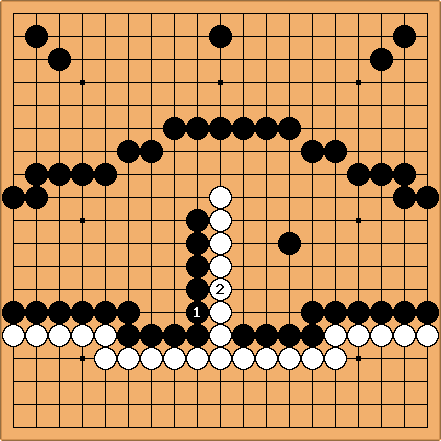 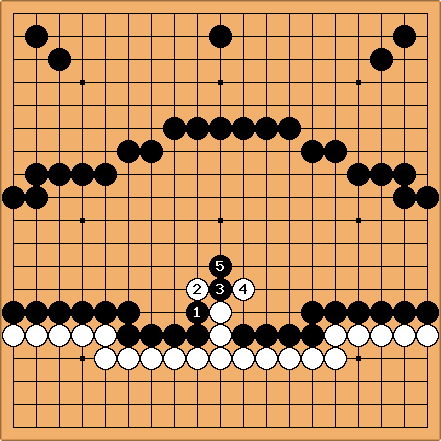 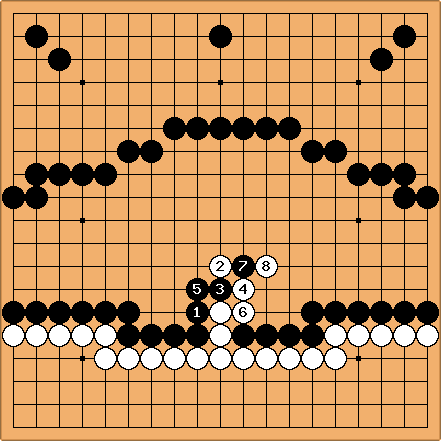 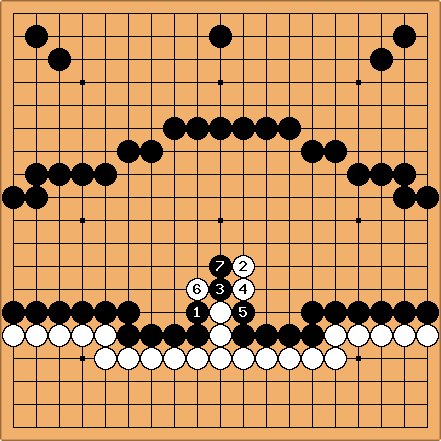 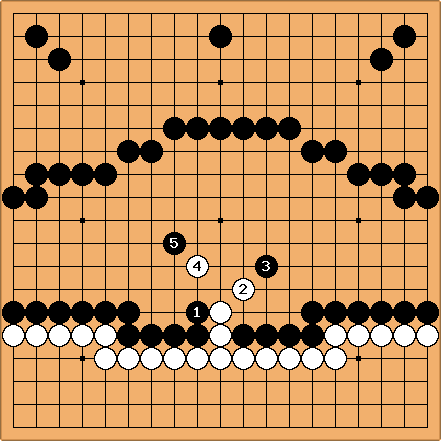 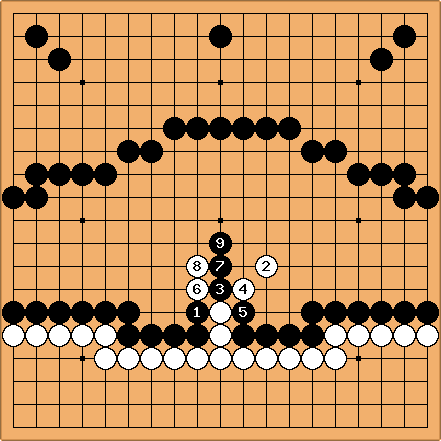 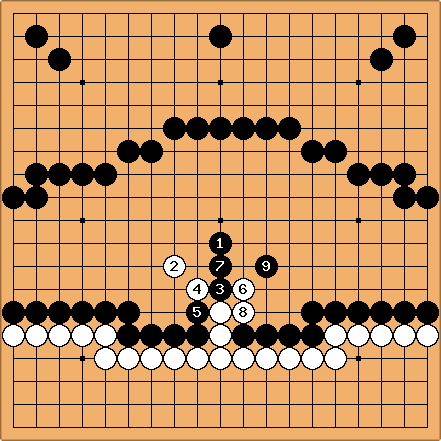 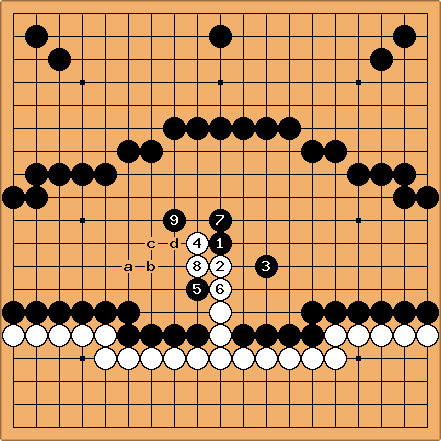 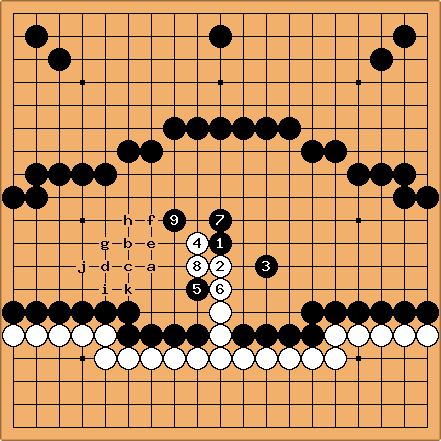 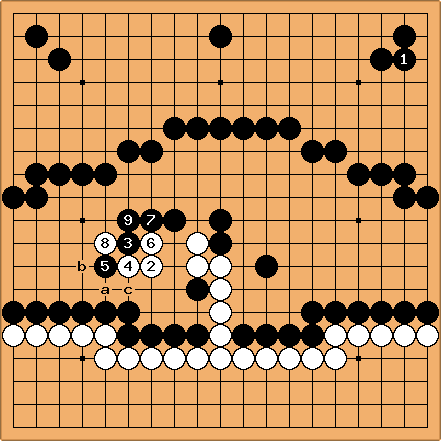 Tests with the flat bottom: (to be continued) it will be interresting to see how to contain the white worm when blacks bottom is flat :p ^^ :D 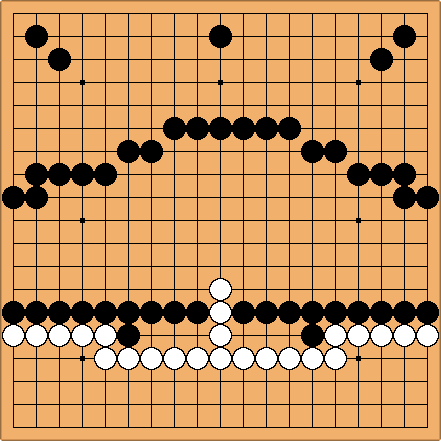 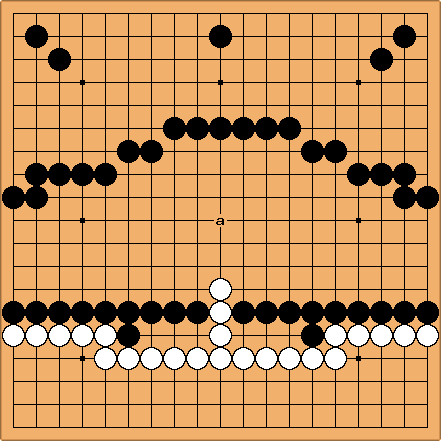 Semper: Ok, so long asthere IS a wall along the bottom (the whole point of the worm) this containment stone will work: on the third line above the worm stone.

There is one possibility I am a bit stuck on: 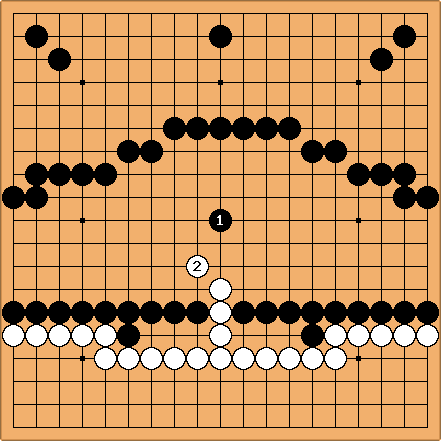 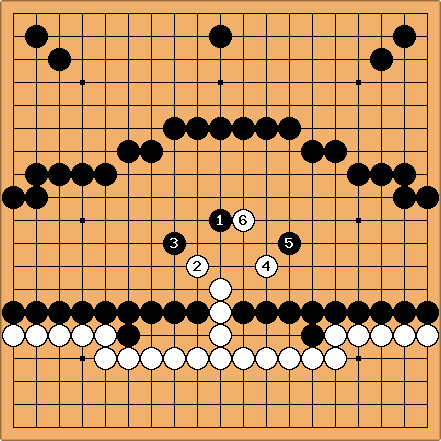 It is because of 6 that I am stuck ! :) so obviously 5 is a mistake. Does anyone else have a better idea please ? 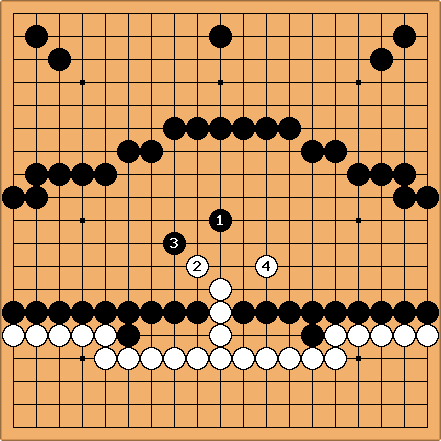 One possibility I see is just playing it like this: 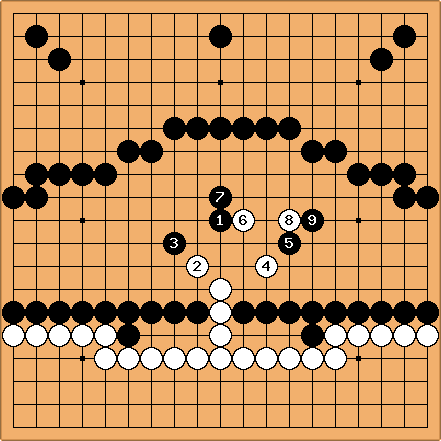 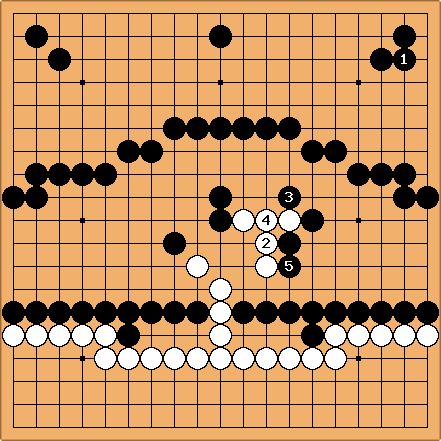 The question still goes though, because maybe someone would find better. Still, I think the third line above the sticking out stone seems to give pretty good solutions. If this is wrong, please show me ! :)

BobWhoosta: I consider the general theory on how to handle this situation to run like this:

2) Choose a side, and block (or if both sides are close to equal, use a cap or two space cap first and then block on the opposite side that he goes towards).

3) Stay VERY solid, and fall back to keep your position secure.

4) Make sure you keep him out of the side you block from first, THEN go back and salvage what you can of the other side.

Depending on the size of the moyo, This single mistake can be worth 20-40 points. A lot of times you can lose almost HALF of your moyo. So like discussed earlier, DON'T LET THIS HAPPEN!!!