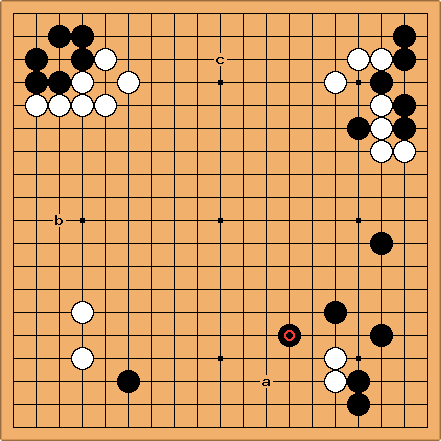 This is from a recent game of mine and I think I don't quite understand this position.

My thinking is that white is thick in both the upper left and the upper right but I don't know how to handle that.

In the game I played at a which allowed black to press me down and create some centre-facing influence which I think somehow devaluates my thickness so I am wondering if it is possible to just ignore the black move (maybe sacrificing the 2 white stones as black would have to invest at least another or maybe two moves to really kill them) and play around b or c instead.

But basically I hope someone can explain this position to me so that I can better understand how to exploit one's thickness in a game.

Dieter: I agree a is not the best move and sacrifice your stones is a better idea but not for the reasons you describe nor in favour of the moves you suggest.

Yes, your positions in the upper corners are thick. The main thing about thickness it's that it is not easily affected by events in the vicinity. So if Black builds influence towards the centre, it will be difficult for him to put it to use, because your positions cannot be attacked. If he builds a central moyo, you will be able to invade hands free.

You should rather look at thickness that way, than as a means to build a moyo. A moyo is a possible outcome of thick positions but not a necessary one.

How then to play with thickness? Well, you want to play far away from it. Playing close to it adds more strength to an already strong position. Your idea to play at the bottom thus was a very good one, in my opinion, but you should probably implement it in a lighter fashion. 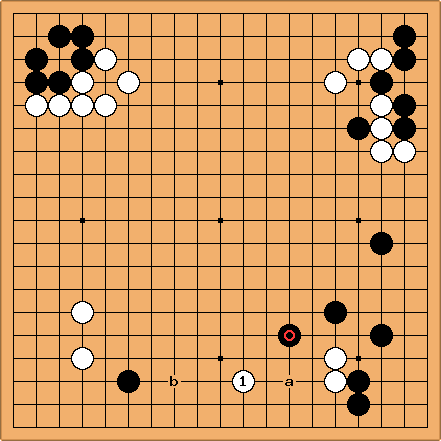 invites Black to capture the already defunct block of 2 stones at a so that White can place an ideal attack & defense move at b. 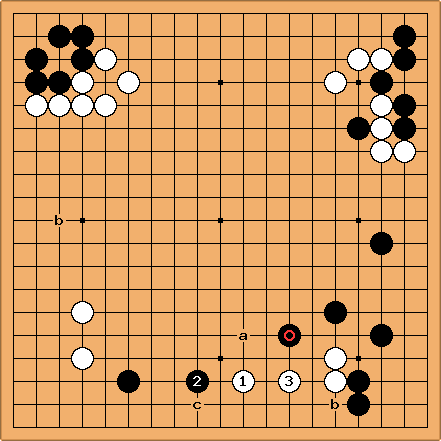 If instead, Black plays the attack & defense move,

seems to settle the stones with follow-ups at a or b or c. 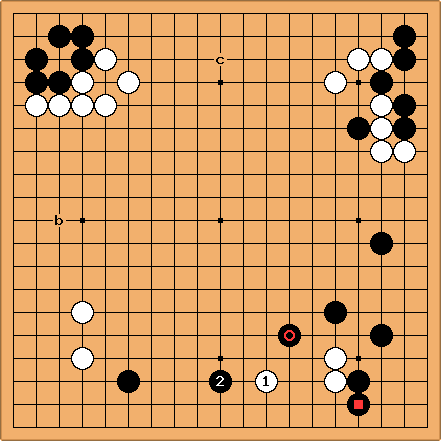 The reason why a is not good, is that it's heavy: White can launch an ideal large scale attack against the group, due to the squared stone which has undermined its base. 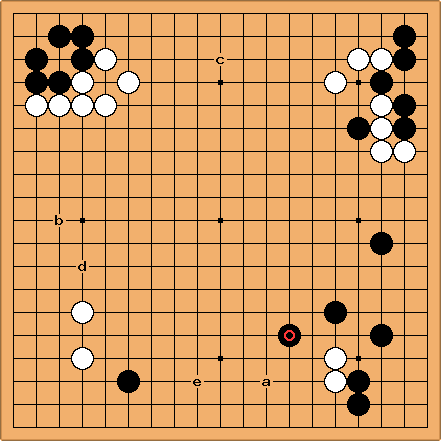 Your suggestion to play b or c instead violates the principle of playing away from thickness. If you must build, then I'd choose d, but playing at the bottom seems to be the best way to put the White's global thickness to use.

Tapir: Why not e first, leaving a for later or if black plays there white can start a running fight with the now pincered white stone in which his strength may be used and side territory will naturally evolve. (What happened in the lower right corner? White attached at black shimari?) 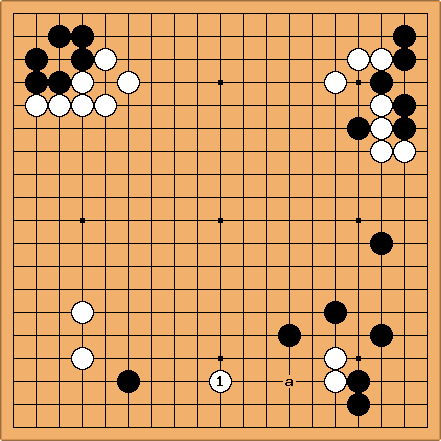 , as a pincer. Black does not have a two space extension from the pincered stone, and White still threatens a. 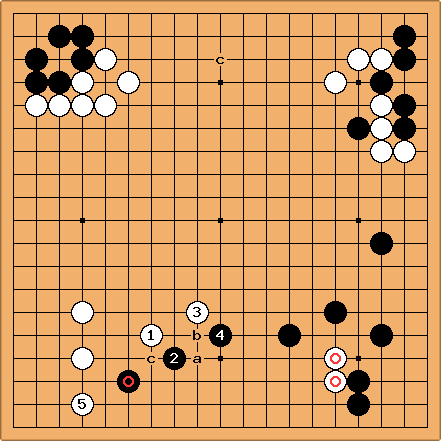 , for example, there is a lot of bad aji for Black on the bottom side (think Wa, Bb, Wc, etc.) while White is building on a massive scale. 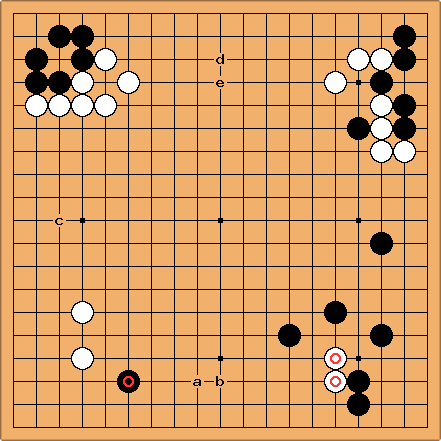 JoelR: I second the suggestion of b, because it balances the pincer on

and the threat to save

. If I were playing more conservatively, I might only do a. I agree that c is way too close to thickness, but my question is about c. White's thickness on the upper left points to the left, but has an open skirt on the top. White's thickness on the upper right is also oriented higher than firmly at the top, but is a little better. I think a Black invasion at d would not have much trouble living, and would only give White modest development. If I wanted to strike fear into Black's heart, I would play e, for further influence, instead of d, which doesn't look like profit yet.