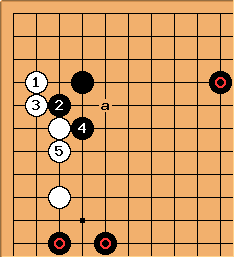 feel horribly submissive... and I know that White can take the corner instead, but I feel it is worse than this outcome. And the corner is still open. How do you evaluate

? My problem is - my intuition says "you are pushed around here", but my knowledge "you make profit here while being pushed around".

Bill; My feeling is Thank you, thank you. Aji keshi. White has a solid position inside Black's sphere of influence, and Black still has problems, such as the weak point at a.

Tapir: I'll try to fix my intuition then... 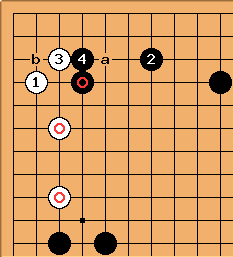 Tapir: Is this better for black? That's what i would try as black... again with a bad feeling because white has taken so much profit now.

should be able to play at

. But still not a lot of bad feelings because the White

stones already form a base, and the

is just a lone stone. However, if you really want a stronger play, you might want to consider

at b, but this really depends on the surroundings not shown in this diagram...

Tapir: Ok, at least black has a stable group on the top with some territory as well... but 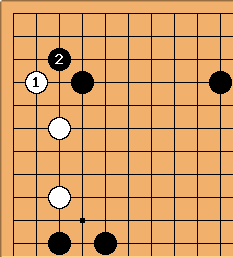 Dave: If Black simply takes the 3-3 point, can White counter attack in a meaningful way? 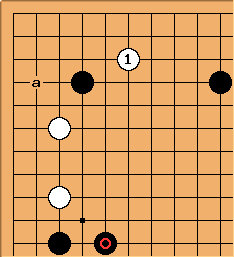 Dave: Is the slide to a too submissive for White in this position? Is the marked jump at the bottom enough to prevent White from playing into the top?

was my first thought. :) But I think that what is further to the right on the top side is relevant, too.

Tapir: In my game the upper side looked like... (the black stone which jumped out (the marked one), was a weakened pincer stone but became strong after white took the lower left corner by a common approach, pincer, 3-3 invasion joseki.)