Jeff: I played a game at the North American Oza Tournament this weekend (Jan 20, 2008) that started like this (as I remember): 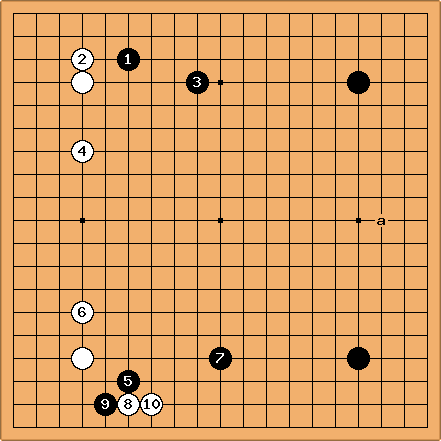 Clearly there are many mistakes. I was black and felt very grateful for

is a trick play that black should respond to with

, but I had no idea how to handle

is not so bad. Perhaps a bit slow, but that's all. with

however, white is being very one-sides. Playing a pincer here would have been consistent with the high (attacking) position of

is simply bad. Black can play tenuki and play the right side hoshi or a, and it will be a good exchange for black. It is very hard for white to find a good continuation in the lower left, because 3-3 is still open. 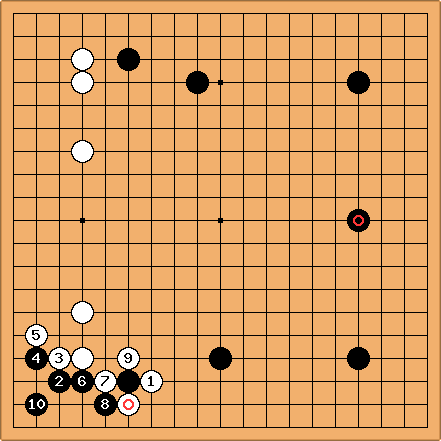 instead of responding locally to

. White tries to salvage as much territory as possible by playing

. Now with the sequence

, black is almost alive in the corner. A terrible result for white. 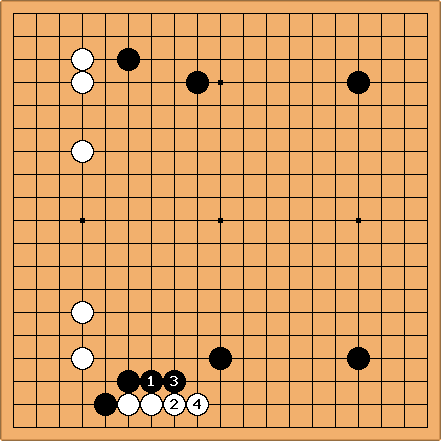 I tried this, thinking to keep him low and build outer influence. But I felt there surely must be a better way to handle these moves. Any suggestions? Thanks in advance!!!

Herman Hiddema: This continuation is terrible for white, just play like this...

Now black gets the corner, keeps white very low on the bottom edge, keeps the marked stones weak and gets sente...

Dieter: When confronted with

, being a contact play, you obviously think of hane. You could also see the

configuration, which makes an elephant eye and play

at the heart of it. Next, a or b is bound to hurt either

. Feel free to continue the discussion from here.

Tapir: Imo, in a trick play there has to be some obvious answer, which turns out bad.

looks like a trick play, but I really don't see the trick. White may intend to play

to take a big corner, but

at b in Dieter's diagram hurts the corner again + the somewhat light three-space extension became a lot safer.

Jeff: Thanks! The nice thing about the advice you guys give is that

is gote. If white chooses to connect underneath, black can crawl on top of white (and indeed must crawl for at least the distance shown). I think I was getting to upset that white was crawling on the second line into my "territory". Instead, perhaps I should have thanked him?

Herman Hiddema: Whoa, wait a minute there. The advice given above is wrong. Do not play

, that is exactly what white is after! Dieter: I disagree with that. See below.

above, white can play like this. Now black has only one eye, and must run, while white has gotten the corner and can play a splitting attack against the black group and the marked stone

Herman Hiddema: The best response for black here is probably to play tenuki (somewhere else)! White has played on the 2nd line in the opening, a move that is already weak in itself. Later, black can always play something like

and get part of the corner.

Jeff: Thanks for correcting that, Herman!

Dieter: You suggest that this result is what White is after and that Black has been tricked. I propose the following tewari

strengthen B's side position. Next

is the exchange which we are discussin, which now comes oddly of course but doesn't alter the result significantly. It is difficult to say how Black has been tricked now. White simply has the privilege to claim the corner with

In addition, the aji is not completely gone: due to Black's strong position, he can still attach at a and slide to b to threaten connection with somehting at the left, or live in the corner.

Herman Hiddema: Well, for tewari purposes, I would say the following:

is worse than I tried to convince myself it was. So it is a genuine trick sequence after all.

Herman Hiddema: Oh, by the way,

is not the right move either, here's how white could've punished that. There is still some aji left due to the peep at a, but getting