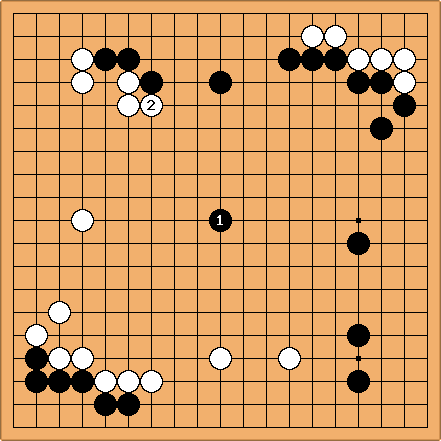 I was quite confused in this game on where to play, black just played k10, i wanted to use my thickness to the left, but black was so large. I invaded on the right as shown below, but that didn't seem to be so successful. Any suggestions on a better invasion or a better use of my thickness on the left? 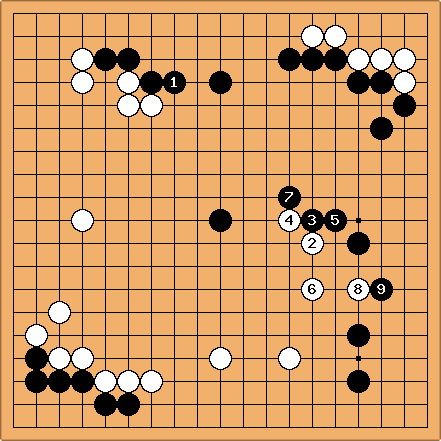 Dieter: I think if you picture

instead of where you played, the moyo contest gets into White's favour, possibly at the expense of Black territory on the right. See below. 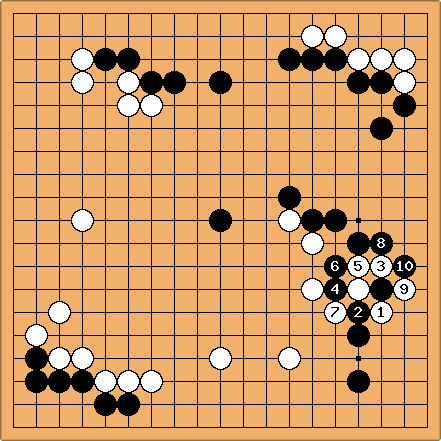 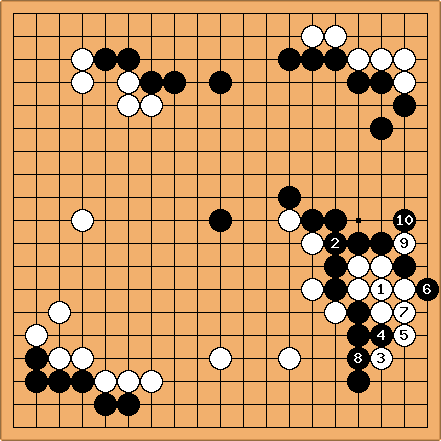 I captured the single stone on the right and black played o6, leaving me with close to nothing. 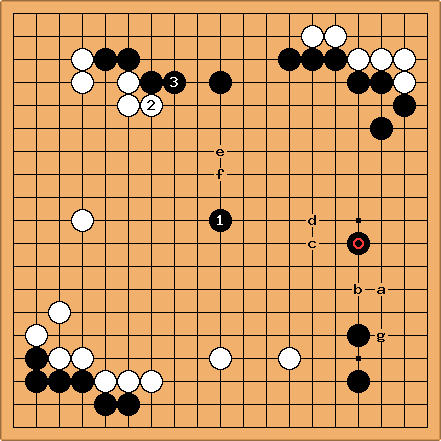 FredK:-- This is an interesting position. Here are some thoughts (but I'm a kyu player...):

On the right side, B's territory is open and invadable -- look at all those fourth line stones. And maybe a would be a better invasion point than b? -- the books I read all stress "against fourth line stones, invade on the third line."

is out in the open, very weak, providing very loose "enclosure", if that's the right word.

in the original second diagram, helps B strengthen the right side by encouraging him to add stones, beginning with d, near

-- which should make the upcoming invasion harder because

is now less vulnerable to forcing moves; and the added stones also at least partially enclose some of B's upper central area -- he can't hope to hold it all -- and seem to enlarge and help the security of B's upper right territory.

So perhaps the reduction should have started at "f"? This leaves W with plenty of room to push in farther, or back out if need be, or even hane to initiate a cross cut fight if B responds with a contact move. (I wonder if starting at "e" is less good because

has been played?) Anyhow reduction moves played around there would not strengthen B's lower right side. Then W's invasion of that region would not have been faced with new reinforcement.

In that second diagram, with the actual moves, could it have been better to play

at 7? This would erase some of B's upper central moyo, and open further threats against B -- maybe

could be captured, or at least attacked with some good outcome?

Also in that diagram, following

the right response? B could have played maybe two points below (at g on the new diagram, safeguarding the lower corner, and then being free to make a blocking move to protect the upper side if W pushed in farther.

In the sequence actually played (in the original third diagram), could

? This would a threatened to cut off the

group with a simultaneous atari on another stone, maybe some fun.

Returning to the present diagram, should

have been something more defendable, like "e"? For that matter, vulnerable is W to reduction or invasion, along the left? I'm sure someone reading this knows the answers.... 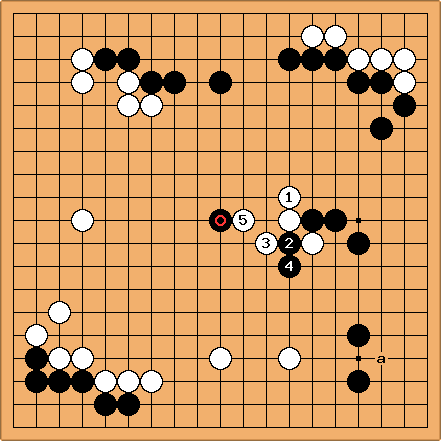 Dieter: The cut at

hurts the marked central stone, which was played to amplify the moyo. Now it ends up rather in White's moyo. The right side is close to become black territory, but there is still a weakness around a to exploit.