This is from a 3-handicap game, black 9k KGS, white 6k KGS. I played white.

White is strong on the lower side not shown here. 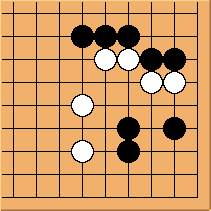 This is the way we played, but I thought neither of us played the best way. Especially Black 8 looks horribly submissive to me. (Black has plenty of Ko threads in the upper left corner, where a huge group of his died. Otherwise 17 at 18 should make a ko.) 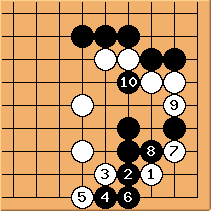 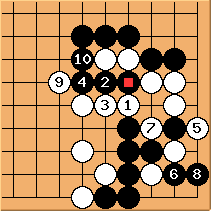 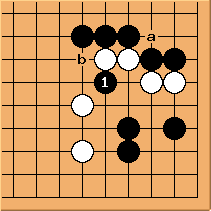 As such, I will turn the question around and, simply say that I do not think White can really stand a Black attachment at

. White's really has a serious shape problem, and this is a splitting attack.

tapir: Thank you! This comment of yours is an eye-opener. What happens if 'a' works here? My guess, white extends once to 'b' and black has enough time to defend against the cut later, allright?

My thought while not cutting was that I'll end up giving black sente after taking two stones. Maybe this is a misconception out of the urge to take the two black stones instantly, which might not be necessary... 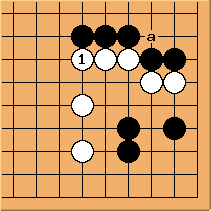 Hence, I suggest a White move at

, to fix up this weakness.

As for the corner, my intuition is that Black cannot be killed, but I didn't read it out.

Alex: If Black cannot be killed in the corner - as is my intution too - and the cutting point at a doesn't work, I'd probably just tenuki. If Black makes the clamp, all he's doing is capturing stones separating two strong groups, probably in gote. Well, maybe not. I guess White gets sente moves against the corner if he keeps the stone alive that might be gote if the stones were captured. Still, it's an ugly position for White and I'd want to abandon it and cut my losses, especially if I'm already strong on the lower side. 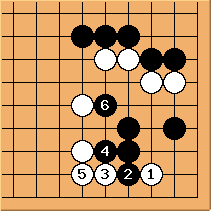 Incidentally, it seems to me that a

move here would be interesting. If

can be a serious attack.