Could someone please explain how to handle the following position.

I reached this position with Black in a recent game on kgs and thought that it would be a very easy win for black given that white won't make much more then 40 points in this game and has to handle a lot of weak stones - but I managed to lose it...

So was I too optimistic and if not what is the proper plan for black here (the marked stone is the last move from white)? 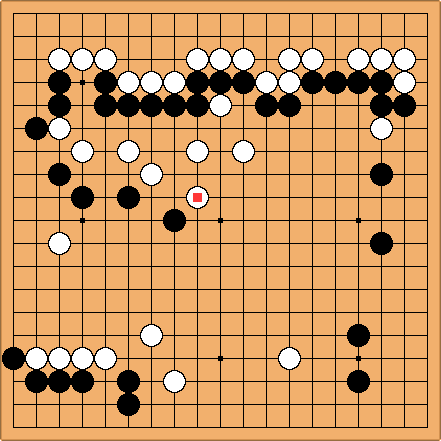 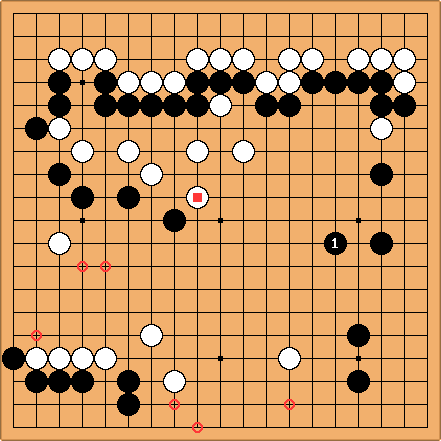 fractic: Whites territory on the left and bottom can be trimmed down with the circled points so i don't really see much use in keeping up the attack in this direction and build up a wall facing down since the terriotry white will make there isn't that big. And you can't make any yourself there

to maximize your own territory? 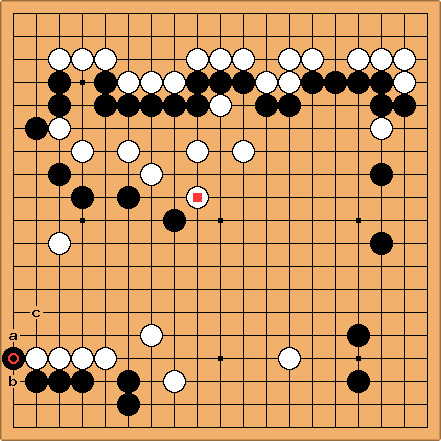 Dieter: You had two questions. 1) Were you overly optimistic? White indeed has 40 points of secure territory, but she has indeed two weak groups, while you are strong overall and have a lot of potential for development. So I would say Black has the advantage. But you're not at the point yet of having an easy win: White's groups are not dead and you have hardly any secure territory.

iff: So you are saying I was too optimistic - better position yes but no easy win. But I've heard strong players say that the number of weak groups you have to handle should never exceed 1 - and white has 2 here ... plus the strength that black has - all this is still not a won game (for a better player than myself of course :-)?

Dieter: Moreover, I want to point out a weakness and an oddity in your position. The oddity is the marked stone: it's an endgame move as if both groups were clearly alive. White's group is not and a-b-c would give her an eye for free.

iff: I played the marked black stone many moves before, expecting white to answer it with the idea of making a little bit if profit while retaining sente - but white ignored it at the time ... I guess should kick the habit of making yose-moves in the early middle-game ...

Dieter: Now for the weakness: 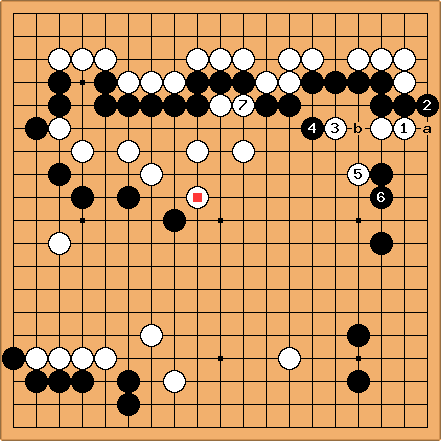 This sequence cuts off a Black group, disturbing the balance of power. The situation is not at all problematic but it's aji to be careful with.

pwaldron: I don't understand this. Playing

at a would preserve a connection if Black desperately needs it. If White blocks and connects, the hane at b on top still preserves shape. Black loses a few points, but if White gets strong enough for

to be a serious move Black has to expect to lose point somewhere. 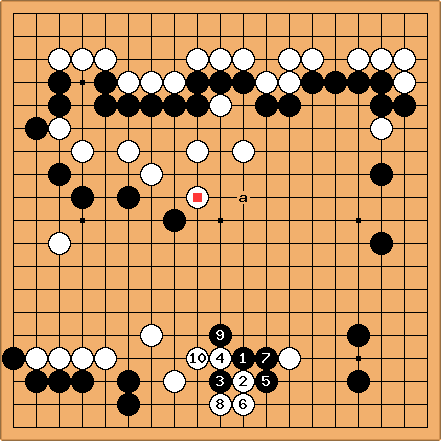 My eye lurks at the shape point a, but in all fairness I'm not sure that I can attack White conveniently. So why not invade at

, and postpone the attack until after the exchange up to 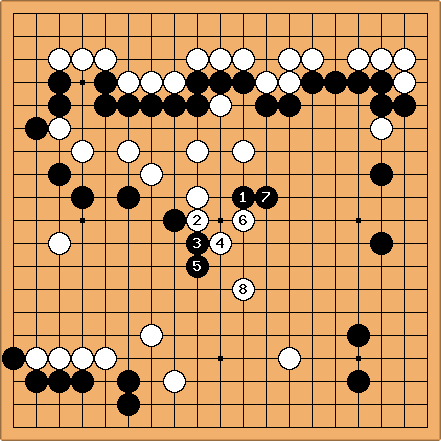 Bill: I like Dieter's suggestion, although I am not sure that White's play is best in the variation given. The immediate attack with

looks good, but it forces White out, rather than towards Black's wall. After, say,

it is not clear how Black should continue nor what he has gained. This attack would be much better if Black had already built up thickness on the bottom side, as in Dieter's variation. 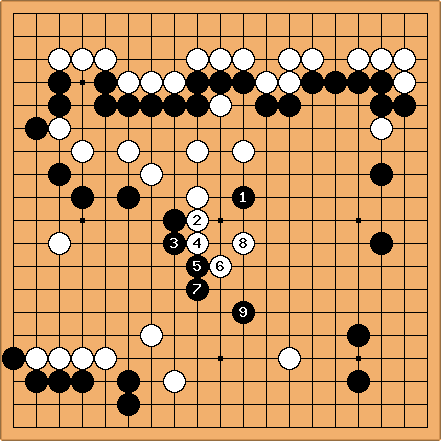 Bill: This attack look better, but I still like Dieter's play.