kb: From a KGS game. Black to move. 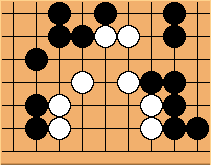 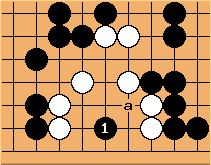 , I think white is dead. W must defend the cut at a somehow. 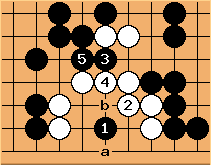 removes the possibilty of an eye there, and after

, but then black can play a. In fact I think

at b. Anyway an interesting problem. 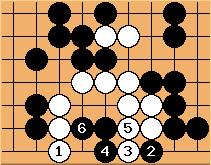 Kichiro (16k): Wouldn't 4 on 5 make an eye for white? And give white the advantage to win the battle?

fractic: 4 is a black move in this diagram so I suppose you're talking about

in the last diagram. zinger allready suggested a in that diagram is the answer. It sets up miai to connect the stones out to either side (assuming white can't escape on the left).