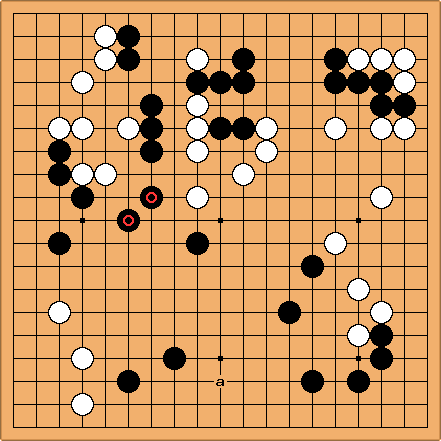 W is going to invade the lower side at a.

Dave: The two marked Black stones were missing in the original problem statement and subsequent analysis. I have added them to all the diagrams. 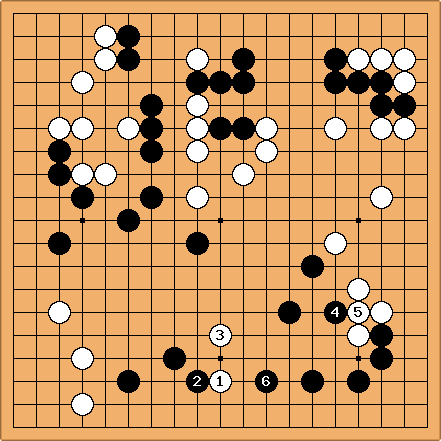 The invasion begins with

is a light response to 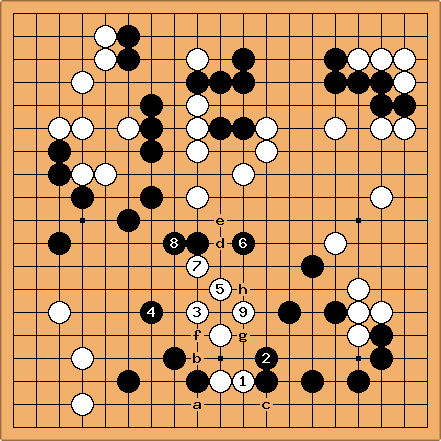 But, Cho writes, that's completely routine, and this diagram displays a living sequence. My problem is that I don't quite see where two unconditional eyes are to be made, and I would be grateful for any further explanation from anyone to whom this is clear.

Cho makes some comments along the way.

, Wa followed by Wb and Wc would already make one gote eye. (I suppose W keeps this sequence in reserve so now only one sente eye is necessary?)

at d would make white safe. (But could black not block at e? Will white necessarily connect out anyhow? Presumably

prevents Wd from working, for sure.)

make the sente eye, after which Wb will initiate a second, gote eye. (But why is

sente? If Bf, then are not Bg and Bh miai to kill the middle eye?)

Cho further remarks that these are all perfectly ordinary moves. I probably have some amazing blind spot; I would love to feel completely comfortable with such sequences in my own games. Any enlightenment would be appreciated.

Dave: There are several issues involved here. It is not exactly a "generic" invasion. I think it helps to look at this step by step (play by play)... 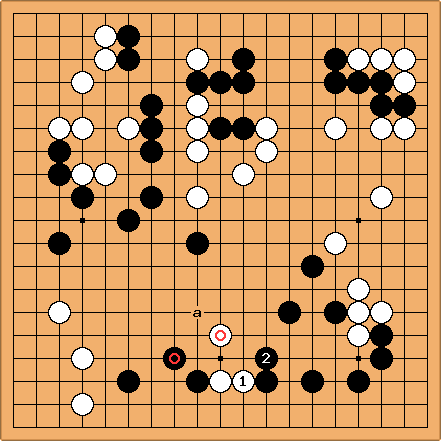 . What happens if Black does not play

here? For example, what if Black goes all out and plays a instead of

? How does White take advantage toward the right side?

BTW, This game is analyzed by Sakata Eio in Go World 34. He said, "Black 63 (the marked Black stone)... is clearly a bad move: giving White the easy invasion at 64 must be wrong... When White jumps to 66 (the marked White stone), his group is in no danger of being killed." 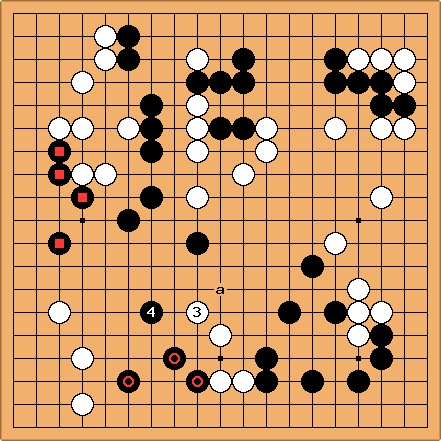 and B answers at

. What happens if Black does not play here? Consider a Black play at a instead. I think it is worth noting that both of the marked Black groups are potentially subject to attack. If Black allows White to drive between them, White will have an easy time. 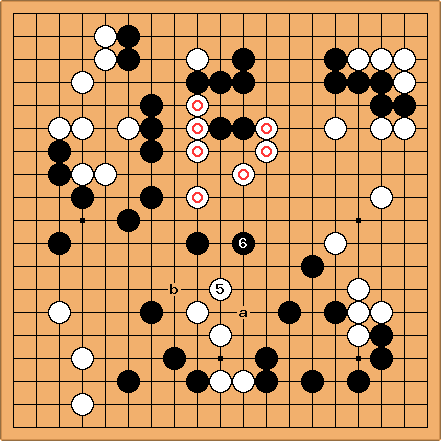 and Black answers with

[1]. If Black plays a instead, what can White do toward the top? How about if Black plays b instead? It is worth considering what damage Black can do to the marked White stones if Black becomes strong in the center. 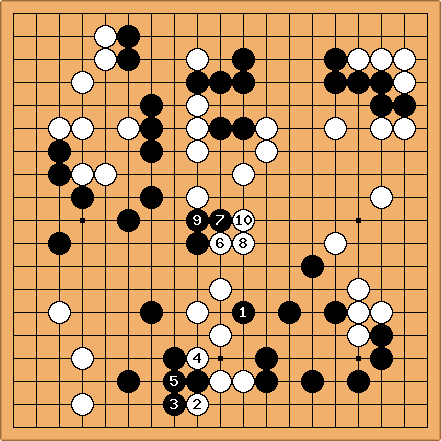 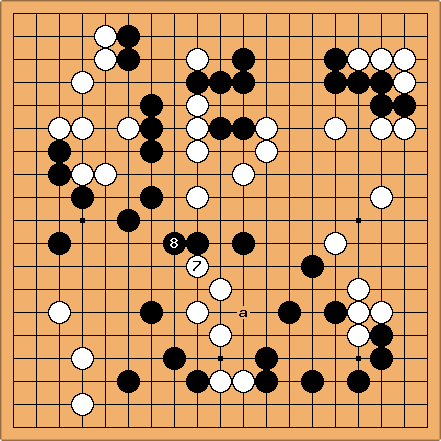 and Black responds at

. What alternatives does Black have? What would White do if Black played at a instead of 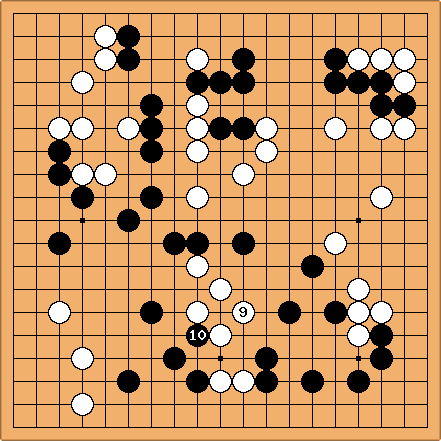 and (in the game) Black turns away. But if Black had tried

Bill: In the game Black turned away? How is

sente, then? (Or is that a misunderstanding of what Cho wrote?)

FredK: My third paraphrased comment was imprecise -- Cho does not call

sente. But that is the last move given on the board. He then says (with the numbers shifted to match my diagram -- the last one before the replies begin) "...Soko de kuro 6, shikashi shiroi 7 kara 9 to me o mochi, b no atekomi mo kikuite iro node hotondo iki gatachi to narimashta." (Sorry for the Romaji, I'm new at posting here. "me" in "to me o mochi" is the kanji for "eye".) I took this to mean that playing b would initiate the gote eye he mentioned earlier; and since the last move specified was for W, presumably B couldn't prevent this. Sorry if I misled (or if -gulp- I've misunderstood the Japanese) -- the final status was part of what I didn't really understand. But all the comments made here have already been helpful --thank you all-- though I am not yet confident that I could successfully defend the final position against a srong black player!

Bill: Thanks, Fred. :-) Let me stress the "hotondo iki gatachi": White practically (or almost) has a living shape. I feel better already. ;-) 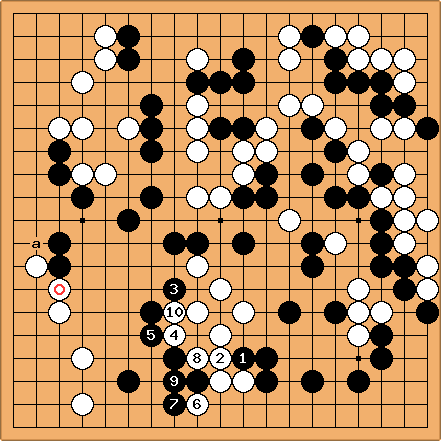 Dave: Later in the game Sakata says that White plays the marked stone to build thickness instead of pushing at a because his center stones are not completely alive. He then give the variation shown here as one example of an unsuccessful Black attack. There are other possibilities but he concludes that it is unreasonable to try to catch these stones in this situation. 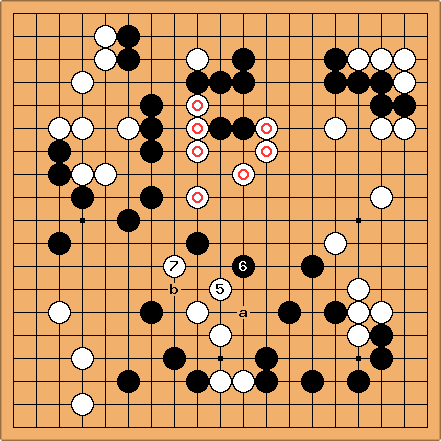 tderz: Anyway, here are professionals at play in a complex situation, perhaps we cannot comprehend everything.

Besides living, also the escape move

springs to mind.
(But the Cho book wants to teach shinogi here) 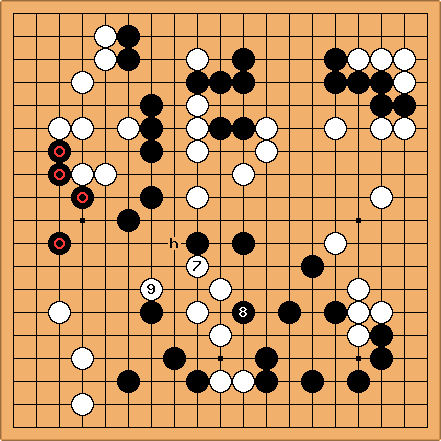 tderz: I have by no means an idea whether my proposal is correct. However, IMO, if the

of the game is not played, White can, should & will move out.

) does this and moves in the direction of 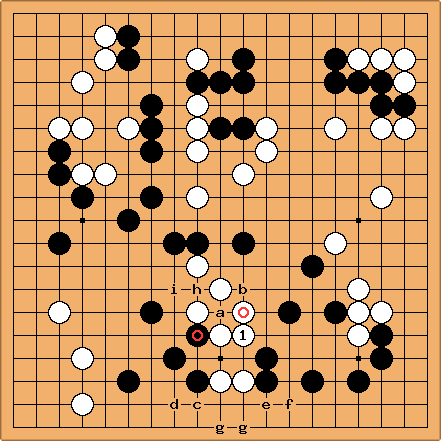 , White could think first of safeguarding the eye at a (it still has the weakness at b.

The lower side allows for one gote eye c through g.

an escape-link if this can be prevented. 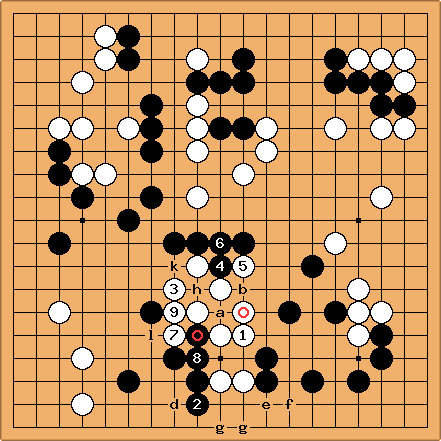 tderz: Imagine a variant where the lower eye is prevented by a

... after some moves k and L become miai.

These are some of many, many variations.

tderz: Sept. 8: Gosh! 2 stones missing from original problem diagram. This might make all previous considerations superfluous. Reminds me of 26 years ago, when 6d Juergen Mattern and another 3d cried out when I handed in my 'solution' for a problem in a Go-course. Some stones were missing! (which made it worthless in their eyes) At least I was serious and tackled the problem.