This comes up all the time. Is there an attractive option for black here? Is there a tesuji to show white the error of her ways, or is this a good sequence for white to scoop out some points on the edge?

xela: I think this position is already attractive for black, there's no need to try and do anything special. The first thing that comes to my mind is black 'a'. White can probably live, but at the cost of making black very strong.

If there is already a white stone at 'c', then correct shape is for black to play 'd' rather than 'a'.

The double hane (black 'b') is tempting, but I think it isn't good here:

If black wants to defend territory on the left, this is the way to do it.

Bill: Comment: I don't think this comes up all the time, with no other White stones in the vicinity. At least I hope it doesn't! ;-) 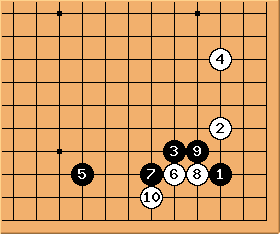 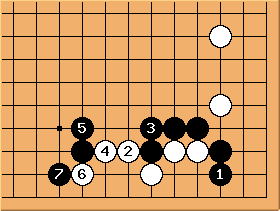 , comes to mind, securing the corner and hemming White in. 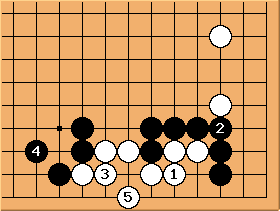 Bill: In this variation White makes small life on the side, but his stones on the right are weakened. Without seeing the rest of the board, we do not know how strong Black's stones on the left are. 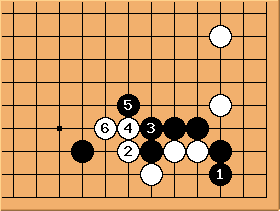 Bill: White may also run with

. This is hard to judge without seeing the rest of the board. However, White looks quite heavy.

FredK: Wouldn't the answer to the original question still depend on the rest of the position? If

is the leftmost limit of B's group, it doesn't look like there's much territory to defend there. Mightn't it be better to play the double hane, give W his ponnuki right on the edge of the board, right up against his already strong position anyhow (sacrificing

, I guess), so that W's two spaced extension on the right is squeezed between two solid B positions, and so is ripe for attack?

Andy Pierce: That was my reasoning too, so I made the double hane, and white resisted in this manner: 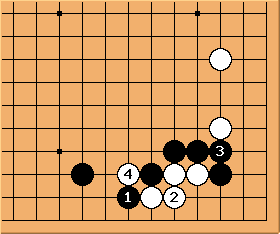 It did lead to a nice attack on the white stones on the right side, but black didn't come up with the immediate comfortable eyespace in the right corner that he had hoped for which blunted some of the force of the attack. I came out of the exchange dissatisfied and was wondering if it could have gone better for black. 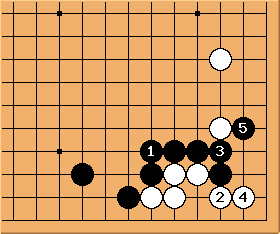 Bill: Black could try the solid connection at

. White lives in the corner, but Black has a strong attack against White's stones on the right. 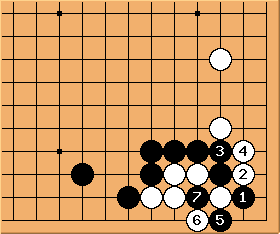 Bill: If Black likes this ko, 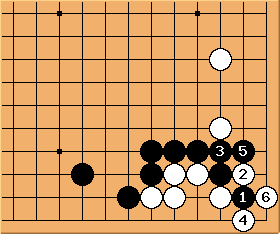 for sente against White's group on the right.