One of Otake's recommendations really confused me. So I'd like to discuss it here. I hope I don't violate any copyright laws or something like this. If so, please tell me and I will delete this page.

Using a small excerpt of a book for learning or review purposes is not a copyright problem.

The following diagram shows the move that confuses me: 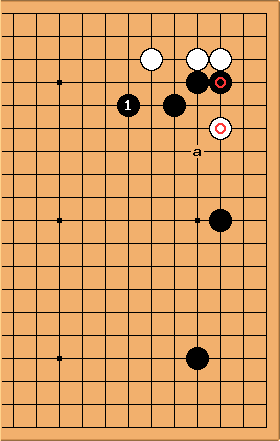 at a. And in every (high-)dan game I watched, if this situation occurred, black settled his group by playing at a. (maybe the lower two black stones were not there or different).

instead of settling oneself with a, because playing at a helps white to press black down as in Dia2: 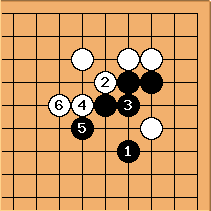 instead of a (Dia1) would avoid this and would be faster in developing a larger moyo. But I would be afraid of white starting to escape. Otake states that this won't be a problem since white would have a hard time to do so, but if it's that easy, why haven't I ever seen someone playing this move? (Maybe I just watched too few pro games :)

Does anybody have experience with

? If so, please post your ideas. What about the lower two black stones in Dia1? I think

could be a bad mistake if these stones were not in place, right?

pajaro: One of the first thing to learn in fuseki is to have a whole-board vision. In this example, the suggested move tries to build a big moyo, while your "usual" move takes profit. The difference is that the moyo won't surely become territory, but will probably give a lot of points and other advantages in other parts of the board. Sure, the white stone can escape. Sure, it may be hard for black to capture it. The point is not that white won't want to escape because it is difficult, but because it will be a burden for white. How much is worth that stone? If it escapes and black can't kill it, how much will be worth the thickness that black will get while attacking? And in the meanwhile, how many things can do a running stone, and how many things can do an attacking group? I think this is the idea after Otake's example. In a word: Think Big. And another thing: you said that you had seen this position in another games, but perhaps the stones in the other corner were different. This is not a small detail. It is very important to try to see the relation that the stones have. In this case, black jumps because he is building a moyo. Without the supporting black stones, there would be no moyo and everything would be completely different.

Bill: The rest of the board matters. However, in the opening Black will almost always do better not to capture White's orphan, as in Dia2, because White can build strength by throwing it away. Better to attack it on a large scale, as in Dia1, and build up strength that way. I learned about large scale attacks early in my go career, and they work quite well. :-)

If you have seen dan players make the small capture, it was probably later in the game, when there was nothing better to do. It may also have been one of those bad habits that even dan players still retain.

If there is no Black stone on the right side, the original block (

in Dia1) was probably bad. Sacrificing the two Black stones on the 4-4 and 5-5 is quite playable when they have no help on either side and White takes the 3-3.

Example diagram of sacrificing the two Black stones on the 4-4 and 5-5, please.[1] 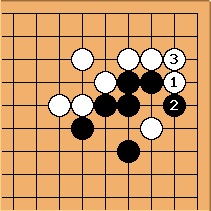 crux: You can't allow Dia.2, as White gets a great position and Black is somewhat squished (and White has the big moves of Dia.3 left). It's inefficiencies like these that allow stronger players to win handicap games. Don't allow yourself to be afraid of playing good moves.

If you've seen high dans play like this, then the KGS rating system is even more broken than I thought :-) Low dans sometimes make surprisingly bad moves, but I'd be surprised if any of them played as in Dia.2. 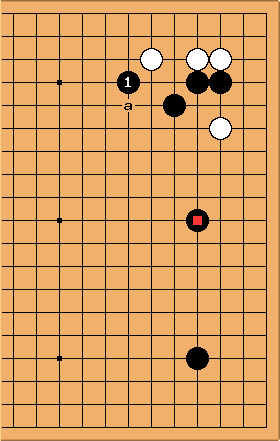 Anonymous: With the marked Black stone one line higher,

is even more common than at a, though you might need a pro to tell you why: 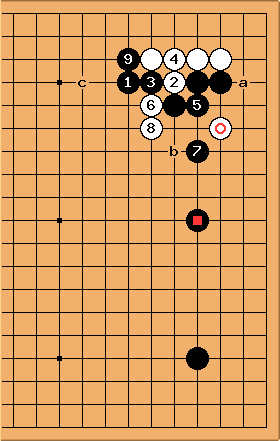 ...which might end up like this. Now Black will often respond to a with b. As you can see (hopefully), Black doesn't put too much energy into capturing the marked White stone. He's building thickness to face other parts of the board. Of course, Black would happily gobble this stone later if White allows it, but for the moment it's more important to build thickness.

Spirit: Actually 9 at c might be more sound. 9 is clearly a move that put's pressure on white's group on the top but if black is planning on answering white a with b anyway, this pressure doesn't amount to much and would probably be better spend developping the center.

Bill: Is this a common continuation? How often does Black play

when the ladder at 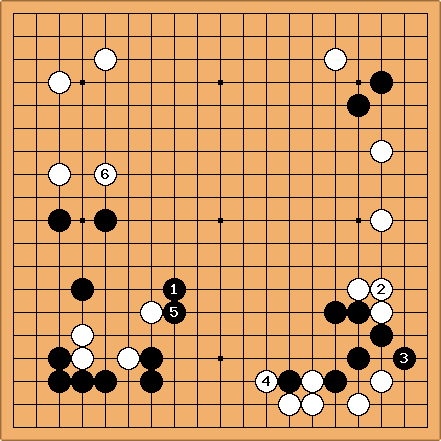 Bill: Here is an example of an even larger sacrifice, but the general idea is the same. Through

Black has taken a large territory in the lower left quadrant, but has invested seven more stones there than White. White has compensation elsewhere on the board.