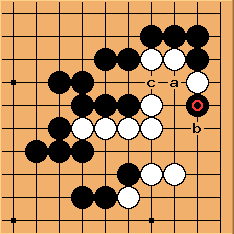 I know it seems rather simple, but there're a couple of ways to play here, are there not? Would appreciate some clues as to when should I pick which...

Bill: An important question is how secure the White group is, and that depends upon what is below this position on the board. It does not look like we can assume White territory down there, given the open spaces. If this came from a game, how about showing us what's down there?

Unfortunately I don't remmber the players but was a rather late part of the game and the White group was undoubtedly safe. 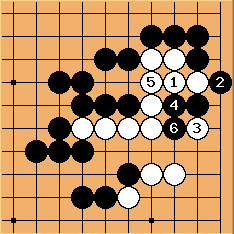 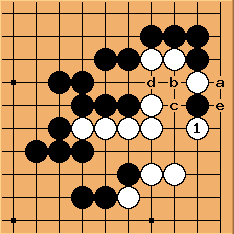 The most problematic move for me - I know Bd Wb messes things up but B can play at either a (Does it revert to the first dia? Or is Wc or We possible?), b (Is Wc a possible response? and if Wd then Bb or Bc?) or c (Wb reverts to the first dia? or perhaps Wd?)... 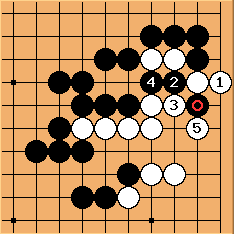 zinger: Maybe this? White loses two stones, but keeps the right side intact.

Yes this sequence may have a different order... Was wondering how does it compare with the others. 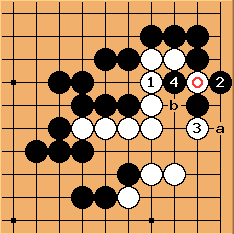 Is the last move playable elsewhere (a for example)? As it is White would probably play now at a leaving a big move at b (Might even revert to dia 1 if Black plays it... With only one diff - after Wa Bb white can tenuki in exchnage for the marked White stone - Seems like an exellent trade, doesn't it?[1])

[1] - I was thinking this set, if all of these were playable would make a nice problems set... Of course I could be seriously wrong (Probably;), afterall I didn't play for way too long...)