NickGeorge: My san-ren-sei book describes this joseki, which SL describes as the "old joseki." 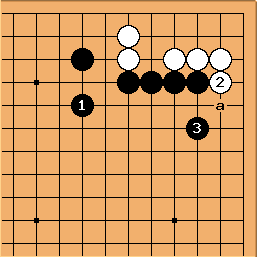 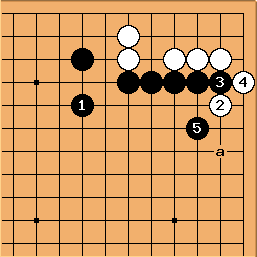 Dieter Hi Nick. The assumption here is that we deal with standard sequences for the early stages (corner openings). In the opening, you do not care about reduction of territory but you care about stability of groups and control of areas. White takes control of the corner by means of territory. Black builds a stable (thick) group thar influences the centre. [10]

here is a typical technique to reduce territory. It is an endgame-like move.

make Black stronger than in your diagram, because White is a bit weaker. 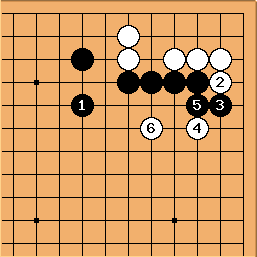 [20] The reason why the author says "you shouldn't worry" is because one might think of this sequence here and worry about the stability of Black's group. Or, ... 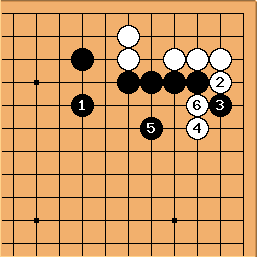 ... if Black answers this way, he worries about the way the controlled areas are shared (White has more). [30]

tderz: the difference seems to be 9 points.
Both variants are gote for Black.
Yet, not only the countable points on the board of a status-quo are important, also the aji for future situations has to be considered:
The area is much more settled in the left variant (<-> invasions).

Inversely this tells something about the timing of

here on the left, resp.

on the right.
The later in the game these moves (could) occur - or the more settled (secure) the black moyo already is -
¨ the more likely white wants to play

NickGeorge: I'm not sure I follow. I guess white is slightly weaker if he does the one point jump, but it seems like that's more than made up for in the demolishing the side takes. I understand that we're only talking about stability, and not concrete territory in the fuseki, but, why is the extension so clear-cut better than the one point jump that the one point jump is never even mentioned as an alternative?

One more thing, can some kind soul show me how the rest of the reduction in [10] would play out? 6 at a seems pretty brutal.

Heh... third time's the charm. I understand Deiter's response now. Thanks. That takes some high-level thinking, though, to not worry about territory, and only stability.