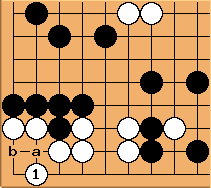 there really so much better than the solid connection at a, that it's worth leaving a four point ko threat at b? (The threat is probably even bigger since it could completely kill the white corner). Maybe I should have shown a bigger part of the board, but let's assume white is shut in, so it's also a question of life and death. But I think, a would make life quite the same way, but without leaving a ko threat.
I see moves like this made very often by players of all strength. I play them myself frequently, because it looks like better shape. But if I look at this closely now, I think a would be a really better move. However, the 6d white didn't think so and I hope someone can explain why. 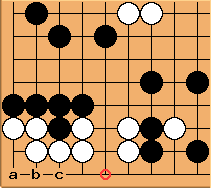 A weak opinion: I suppose that you have to count the number of ko threats. Is a a ko threat for Black? At a glance, it doesn't look like one. If a then b we can still answer at c to have 2 eyes if we consider the white area extending to the circle. I have some doubt about the sequence b then c, but since White has a with capture all on return, I am guessing White is better in your line revo. This seems to be an example of the HangingConnection v SolidConnection debate.