Alex Weldon: For some reason, the chapter on creating two weak groups still has me tearing my hair when it comes to finding examples (since most players who make the mistake make it so frequently that their games are too ridiculous to talk about correct play). Here's another one I'm thinking of using now, but I have a few questions and would like to poll the audience again. 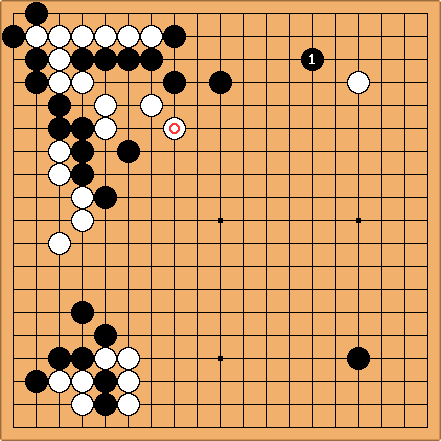 , so now it's White's turn. I'd say the game looks better for Black, mainly because

is bad shape, but it isn't hopeless yet, in my opinion. Here are the moves that followed in the actual game. 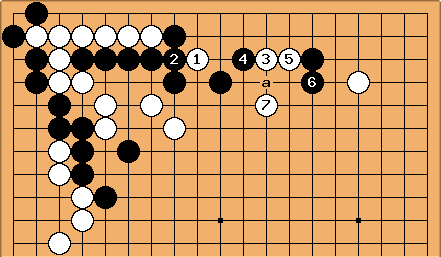 is fine as a peep (maybe the timing is wrong, but that's the kind of thing I need to teach myself, not others... way too advanced for the players I'm aiming at).

is questionable, since Black has ways of counterattacking, but

makes it into an effective probe, since Black now owes a move here.

are the kind of mistake I'm cautioning against, however. Although they do divide Black into two weak groups (three, counting the one on the left), they also create a new weak White group, while also leaving the corner weak. Both players now have three groups that are not clearly alive, but Black's are, overall, stronger than White's, so White will probably get a bad result from this fight.

Instead, I suggest that White should reinforce either the corner, or his weak group to the left, while threatening to run out with

. If Black then plays at a to fix the problem, White can reinforce the other side as well.

However, there's a question of move order. I had three ideas, and I'll present them in chronological order.

is the mistake, creating a second weak group.

is a questionable move, but after that I think

are just following through with the original plan of

. Of course it is a difficult fight, but not one without chances for white; changing horses in mid of the fight and abandoning

is inconsequent, and admits that

was a bad move. It is really a matter of style, but I always recommend players to follow through with their plans, instead of accepting a bad result. 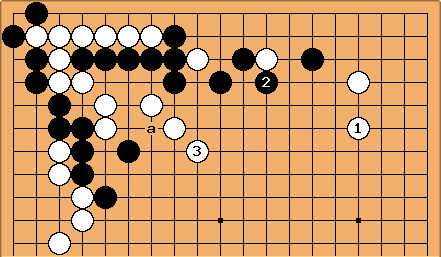 dia. [3]: Originally, I was going to suggest playing

, inducing Black to defend at

so that White could then move out at

instead of a low extension because it has more influence on the central fighting, and

instead of a faster way of moving out because of the aji of Black a.

However, it's too optimistic, I think, to imagine that Black will simply play

. The White group is weak enough that Black can attack first and go back to defend later if necessary. 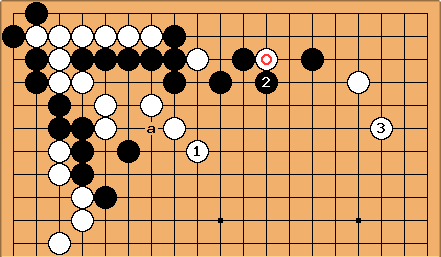 dia. [4: I thought about simply reversing the move order. If

would be enough to induce

, then White could go back to

without risking a counterattack. Furthermore, now that Black's top side group is secure,

could be played low, so as not to leave an open skirt if Black gets to play first on the right side.

might be a little too far away to force

. Black might instead make a double kakari in the top right and try to deal with 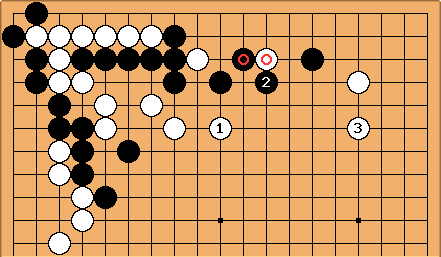 here would be much more likely to get

in response. It isn't as good as the diagonal move, since it ends up closer to the strong Black group and further from the weak Black group, but getting

still gains more than is lost by the

a little more and prevent a leaning attack. If Black would counter-attack with a double kakari in the previous diagram instead of playing

, maybe this is better.

So, this is kind of a vague, open-ended question. I just want to hear what some other people think. Corner first, or the middle group? If the middle group is more urgent (I'm pretty sure it is), is the diagonal threatening enough, or does White have to settle for the jump in order to force a defense? Is forcing Black to defend immediately even necessary? Maybe I'm wrong and it's aji keshi.

Rich (~5k): I think the middle group is urgent; I don't think white can permit a black play around

, can she? It seems to me the connection around the marked stones is so weak that the top white group is either dead or will have to run so hard that black will all but win by chasing it. Personally, I like the third option, possibly with a kikashi around 'a' before playing 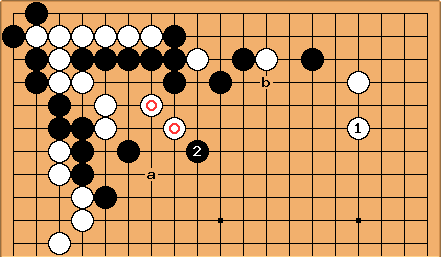 is globally so enjoayable. For the same reason White defended (around) there in diagrams 3, 4 and 5. Going back one step in the argumentational chain, it makes

in dia. [2] so unreasonable (there you have your good example for creating 2 groups). After

, black does not seem to be able to attack with

in this dia. (6), so he should defend, but why with the kosumitsuke

(in dia. [2])? This only strengthens White (White could also tachi at a in dia. [4] = b here; locally this is a very bad exchange for Black). I would think of only playing 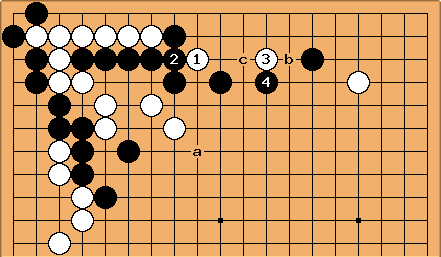 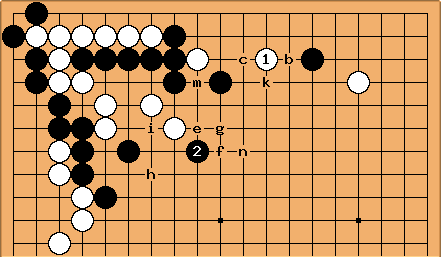 dia. [8]: tderz: Could one start more efficiently and reply to

? Let White chose now between e, Bf, Wg, therewith inducing Bk - and White h, whereby she must watch her weakness i.
Black would make it to complicated for himself, creating own weaknesses. If Black played

-Bf, he should be able to play n as well - or leave it all together.

BTW, why did Black reply to 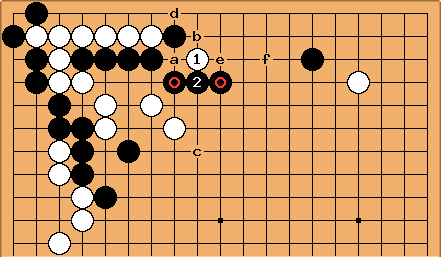 dia. [9]: a and b are miai - who is interested in connecting underneath on the 1st line with d? (Be)
White has effectively weakened herself (

in dia [2] vs. the white stones in the direction c). White must run away with c now.
Tewari: Any white invasion at f =

in dia. [2] seems now even more obviously premature (no aji around 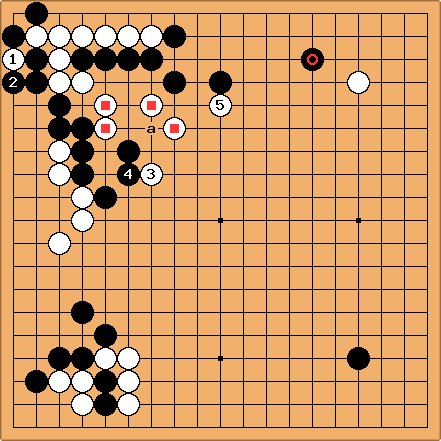 Andy: Difficult for white. Whatever white was trying to achieve in the upper left has gone wrong and white needs to act quickly to stabilize her group, since white can't get sufficient compensation by sacrificing it. I would start with

to undermine black's weak group on the left, then try for some immediate central expansion, treating either

). This looks like a bad shape/blown joseki lesson rather than a two-weak-groups lesson to me.

Alex Weldon: Thank you everyone for your comments. Some responses, in no particular order: 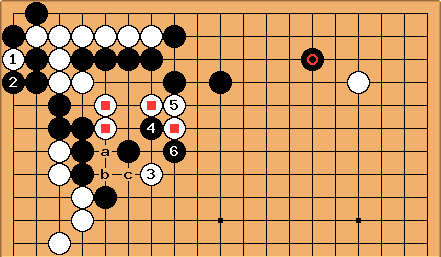 I thought Black could resist like this, but upon looking at it more carefully, it seems to me that it's likely to result in a capturing race in the corner that White can win, so Black can't play this way.

is not so good. White can reply at a, and I think Black has nothing better than B b - W c

Alex Weldon: You are correct, of course. This is typical of me: getting so absorbed in examining more complicated lines of play that I overlook the obvious.

JoelR: More generally, what is the problem with the

. I'll grant it's slow for moving out, but it's faster than a bamboo shape here, and I don't see anything faster and as solid. 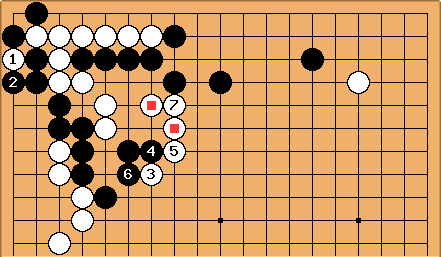 , White needs to make an empty triangle with

Andrew Grant: Is it really necessary to find examples from real weak players' games? I'd be tempted to "cheat" here and take a position from a professional game where the pro played correctly but a weak amateur would most likely make the sort of mistake you want to illustrate. Then you could simply replace the pro move with the instructive blunder without having to worry about the moves leading up to it being wrong.

Alex Weldon: Not a bad idea... although it loses a bit of its legitimacy that way. It's one thing for me to say "oh yeah, this is the kind of mistake 5 kyus make," but unless I back it up with real life example, people will surely protest "bah! I would never play that!"

Maybe I could do something in between. Host a series of pro game reviews on KGS, and have the kyu players attempt to predict the moves.

Gronk: I've seen the following type of thing written in go books: "While there are some questionable moves in the earlier part of this game, Black "a" illustrates the theme of this chapter." That is, simply acknowledge that play has not been perfect without going into details and leading the reader to the move that illustrates your point is good enough. Anyway, why is it important to show moves preceding what you want to discuss? You're not going to show the whole game are you? Just rule it out of bounds to criticize moves prior to the point of discussion.