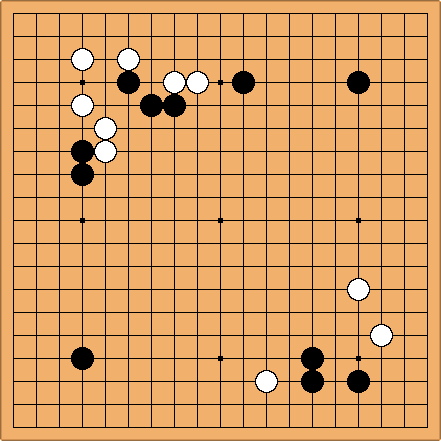 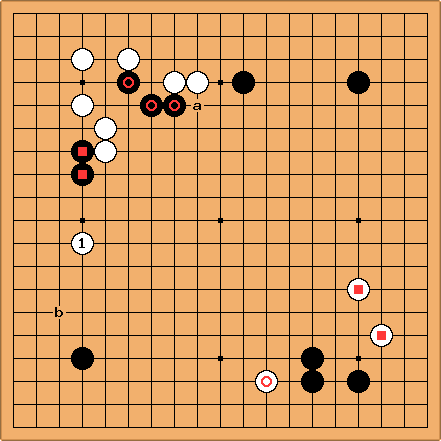 Bill: This is a busy board. Several places look attractive.

Black is secure in the bottom right.

there can be treated lightly as a kikashi stone. It is not urgent to protect it. The

stones there really want to extend on the right side, but are OK for now.

W a looks attractive, as pushing through a small opening is strong. That is a dual purpose move, attacking the

stones while aiming at invading Black's moyo on the top right. However, the

stones are easy to throw away.

stones, however, are heavy and without a base. So I think that

, attacking them, is good. Once Black extends from them it is too late.

I prefer a as well, I am interested by the immediate move 1 though, I think I might choose to play at b instead of this, hoping then to follow up at 1. Is this woolly thinking on my part? 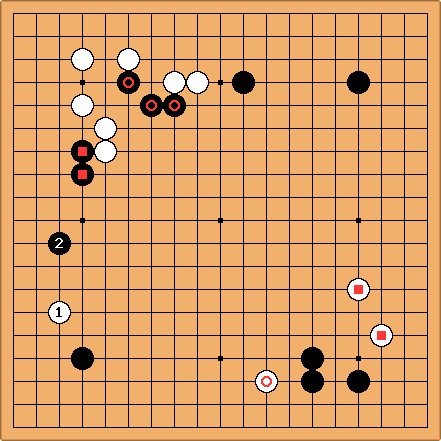 Charles If you mean this

, I don't suppose Black would hesitate to play a pincer, such as 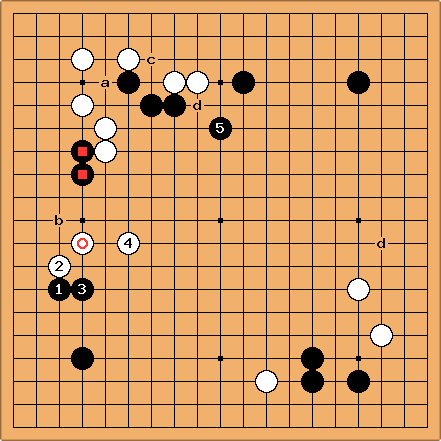 seem promising for White; and not easy to omit.

On the other hand if

comes, I'd start worrying, as White, about my aji in the upper left. Black at a seems to set up threats in two directions.

is an interesting reply. I am not sure how to respond. It is early yet, so there is an argument for White's taking credit for preventing Black's extension and switching to d. However, keeping up the attack seems like a good idea.

is large scale, but looks thin to me. Maybe W b.

Charles Yes, I think many good players would feel that White should add one more stone in the upper left, in order to have done something definite there. Then I believe Black d is big.

Reuven: Black shouldn't try to first get out or something, perhaps?

Bill: Running early with heavy stones is a quick way to get a difficult game. It's asking for trouble.

Charles You have to assume Black has some sort of sacrificial strategy here. Anyway, the position is playable for Black, even giving up some stones. Put it another way, grabbing a few stones, early in the game, is not a panacea.