The following position occurred in one of my recent games. I am black and about 1 dan AGA. White is about 2 dan European. 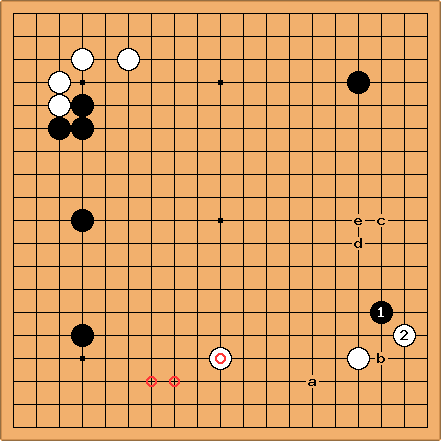 called a "foot-sweep" move, sort of kicking out the legs of a possible black position starting with

. My question is: what are some sensible follow-up moves for Black and what aji is left in the corner that both players should be mindful of?

I've seen it written that with

in place, Black a next is not a good idea. This makes sense because White can start a splitting attack on Black a and

. Though if Black gets a stone in place at one of the circled points, perhaps a is playable (is this so?).

I've also see it written that b is one place for Black to aim, but I'm not sure what joseki-like sequences might result or if some additional supporting stones are needed to pull them off (help requested on this).

Finally, what I and another dan-level AGA player concluded was that Black should treat

is so low. One way to do this is to simply extend down to c or so. What do you think?

Then I had a look at what the pros play. 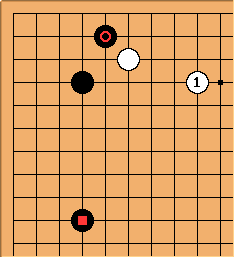 is the most common play, it seems. After that there are various follow-ups for Black, now or later.

Black's problem would be to cover the distance to

On the other hand, this seems a most rare side pattern. 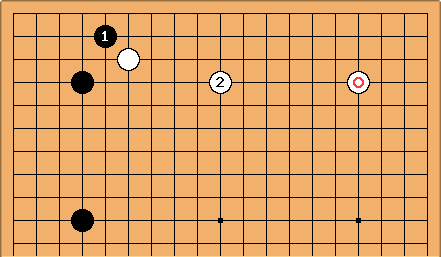 This occurred once, played by Kobayashi Koichi. But I think the foot-sweep here is a little odd (territorial), given

Bill: I think that the idea that you can view

in the original diagram as kikashi is sound. Extending back on the right side to d or e, as the in the professional examples, is in line with that. As is an extension to c or a shimari in the bottom left corner.